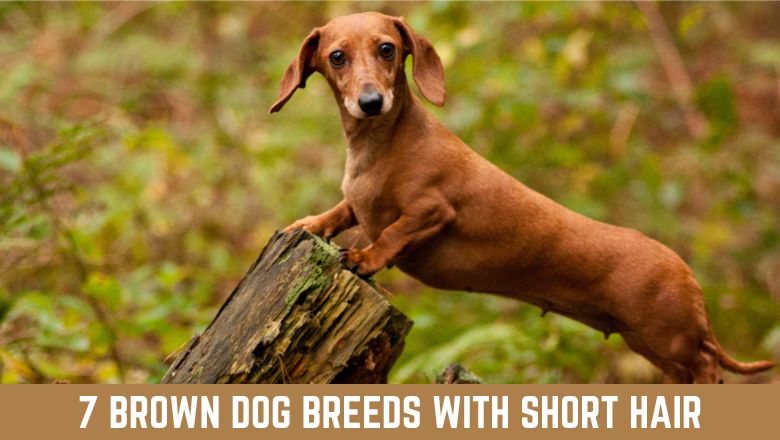 In this article, you will get to know all details about “7 Brown Dog Breeds With Short Hair“.

Some time ago, I wrote an article about red-coated, short-haired dogs.

Readers who are interested in brown coats and short-haired dog breeds have shown great interest in this post.

As a matter of fact, I have gone ahead and made you a list.

Besides having short brown hair, these dogs are also well-known for having a sweet, affectionate disposition.

My list includes a majority of breeds that are!

My list is arranged by size- starting with the smallest and working up.

From the smallest (the Dachshund) to the largest (the Great Dane), this list includes some of the most well-known brown dog breeds.

In this article, you will learn about the following breeds:

That strange body shape comes from the fact that Dachshunds were bred specifically to hunt badgers.

Sausage-shaped dogs are perfect for digging burrows deep in the ground.

Mini and standard size is available.

There are plenty of options with either size if you are looking for a brown short-haired Dachshund.

A range of shades is possible, including tan, fawn, and even chocolate.

In addition, they are available in one or two shades of brown.

If you cannot find the short-haired dog of your dreams, these sausage dogs also come in long-haired and wire-haired varieties.

Once again, celebrities played a major role in this popularity.

This is mainly because of the movie “Lady and the Tramp” and because Richard Nixon owned a Cocker Spaniel.

Brown happens to be one of the most common colors.

The length of the hair on the coat varies depending on the part of the body it is on.

The hair on the ears and the back of the legs are longer than on the rest of the body.

It is believed that cockers were originally bred to hunt birds, specifically woodcocks.

Despite this, these dogs have adapted and have even recently been used by the Cuban military to detect narcotics.

In terms of size and coat, the Labrador Retriever is a medium-sized dog.

A variety of colors are available, including chocolate, yellow, black, and silver.

Short ears hang close to the head of the Labrador retriever, who has a large skull.

Its tail never coils up over its back or onto one of its sides, despite its length and weight.

Hunting dogs of this breed were originally developed to be gun dogs.

Known for its high level of activity, intelligence, and ease of training, it is highly sought after.

Labrador Retrievers are more popular than Cocker Spaniels, making them the most popular breed in the world.

They are easy to get along with, flexible, and quickly make friends, which contributes to their success.

As well as having a strong bond with their families, Labradors are especially devoted to their children.

Due to their calm demeanor, high level of intelligence, and ease of training, labradors are also considered therapy dogs.

As one of the most versatile and reliable hunting dogs, German Shorthaired Pointers are capable of hunting on land as well as in water.

Furthermore, they are very fast and strong, allowing them to react and maneuver quickly depending on the situation.

There is usually a brown and white pattern to the fur of the German Shorthaired Pointer, and their ears are long and hang straight beside their heads.

Despite being on the water, GSPs are able to stay warm due to their short and dense undercoat.

Due to their superior physical attributes and abilities, they make the perfect hunting dogs.

Depending on his environment or the training he received, this dog may have a different temperament, but they were originally bred as family guard dogs and powerful hunters.

Their intelligence, confidence, boldness, reliability, and resilience are also rather impressive.

The dogs are very good with children, and they can be very protective if they sense a threat.

Boxers are a combination of the Old English Bulldog and the Bullenbeisser (a historic German breed).

Originally bred to hunt bears and wild boar, the Bullenbeiser was larger than a Boxer.

In the nineteenth century, as these sports waned in popularity, the Bullenbeiser was crossed with smaller mastiffs to produce the Boxer.

In addition, Boxers were bred to herd cattle, not to kill bears.

Since then, they have also been trained to work with the police and military.

In most cases, boxers are brown in color and have very short hair.

Their color ranges from light fawn to a darker brindle.

Dogs of this breed typically weigh between 60 and 70 pounds and range in height from 22 to 25 inches.

As the seventh most popular dog in the United States, the Boxer has held this position for four straight years.

A dog of this breed is known for having short, sleek hair that is kept close to the body.

Besides their iconic physical appearance, they also have a distinctive personalities.

There is always an opportunity to play for these dogs, as they are the class clowns.

The majority of the time, this is hilarious, but it can be exhausting to train a dog that refuses to listen.

In the company of his family, he is trustworthy, but he may be wary of strangers.

When he’s playing with other dogs or children, he has a cheerful and outgoing personality, but when he needs to stand firm, he’s courageous and resolute.

In the process of interbreeding with a Mastiff, a purebred Mastiff was created.

Originally, the Scottish Highlands were home to the Alaunt and Molloser breeds, which are direct ancestors of the English Mastiff.

Hunting dogs like these are eager to engage in a head-to-head battle with lions.

They were hundreds of years ago, or they were then.

The Romans invaded Britain over two thousand years ago, and they were said to have helped repeal them.

Historically, the British military trained them to be guard dogs, so they are now responsible for watching over the castles when it is dark.

The Mastiffs patrol the grounds nightly, making sure nobody sneaks inside.

It was a pleasure to have a regiment of combat veteran Mastiffs accompany Hannibal as he crossed the Alps during the battle.

Military troops find them to be excellent friends.

Despite being sensitive, this breed is highly loving; therefore, you should not overdo it when teaching them, and it should be done as part of a game.

Besides being quite large, they live for six to ten years, and their height ranges from 27.5 to 30 inches.

It is the tallest dog breed in the world, the Great Dane.

A descendant of ancient hunting dogs, it was used during the Middle Ages to capture wild animals such as bears and deer, as well as protect nobles.

The dogs were trained to protect high-ranking nobility from potential assassinations.

Nobility such as kings and queens is an example. The breed was originally called “Englische Dogge,” but later changed to “Great Dane.”

This breed is large, well-formed, and beautifully sculpted, which contributes to its royal aspect, which combines raw power and grace.

While it is one of the largest working breeds, it is also unique in that its overall build must be so well-balanced that it never appears awkward, and it must move with a broad range and muscular drive. Dogs of the Great Dane breed are known for their robust builds and running gaits.

These seven brown dog breeds all have short hair, so we hope you enjoyed learning about them! These breeds vary greatly in size, activity level, and coat type, as you can see. It is our hope that this article has helped you narrow down your search for the perfect furry friend.