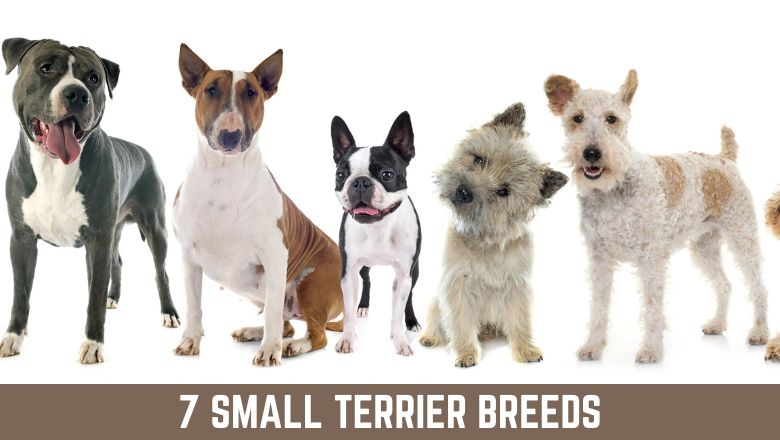 In this article, you will get to know all details about “7 Small Terrier Breeds“.

In terms of appearance alone, it’s easy to see why Terriers are such a popular breed.

In addition to their timeless, refined, or pampered looks, these former rat catchers make fabulous companions.

In addition to being loyal and affectionate, Terriers are energetic, full of life, and capable of long walks.

It’s true that they still do a good job at hunting vermin – but hopefully, that’s not what you need them for.

It’s no secret that we love them, and we’re not the only ones.

The breed has won more best-in-show awards than any other breed at the Westminster dog show over the years. The black Russian, the minuscule Biewer, and all shapes and sizes in between.

This list begins with the wiry-haired Scottish terrier, one of the most iconic terrier breeds, with a coat ranging from dark gray to jet black and brindle, with an average weight of 19-22 lbs for males and 18-21 lbs for females, and a height of 10-11 inches.

A dignified, independent dog that once roamed the grounds of Scotland’s stately homes, ‘The Diehard’ is one of several dogs on this list named after places in the British Isles.

As far as picking up shortbread crumbs from carpets is concerned, it remains adequate.

Despite the verdant, craggy mounds and moody skies of the picturesque Scottish countryside, this hardworking huntsman remains a watchdog, loyal to his owners, but suspicious of newcomers.

It is challenging to keep up with the hunter’s instincts of a Scottie – they require frequent grooming and energetic play, but their intelligent, spirited personality and timeless, compact appearance make this dog breed a great companion.

Welsh Terriers are the second largest breed in our Brit Pack, weighing about 20 pounds and standing 15 inches tall.

This sturdy, compact breed, along with its Celtic companion, the Scottish terrier, is the oldest native breed in the UK.

Welsh Terriers are known across the pond for their black and tan coats and their lively, independent personalities, which remain well suited for life beyond the rugged coastlines and heather-beaten moors of Wales.

This is a dog that went from picking badgers out of their burrows and foxes out of their holes to happily trotting the fine carpet of the oval office as a companion to the President.

This breed may be regarded as a little calmer than other similar breeds, but it is a high-energy dog that requires frequent exercise.

Scots are also the originators of the West Highland Terrier, or Westie.

This boisterous white bundle of excitement and affection weighs on average 15-20 lbs and stands between 10-11 inches tall, and has been a favorite companion on both sides of the Atlantic since the 1960s, earning Cruft’s pedigree and a place among America’s most popular breeds.

It is reported that King James VI of Scotland sent a dozen of these charming, full-faced, and double-coated companions to the Kingdom of France during the swing era.

They must be exhausted looking after all of them if only he knew!

The Yorkie is one of the most instantly recognizable dog breeds.

The tiny terrier weighs about 7 pounds and stands about 7-8 inches high. It is mostly known for its long, silky silver-blue and cream coat, but can also be seen with a dark, rough one.

It is important to brush the long-coated variety regularly to keep it smooth and shiny, and owners should be aware that the breed can be hypoallergenic.

Let’s not just focus on the looks of this toy-sized terrier.

As a result, it has become a perfect breed for trotting around town and makes a wonderful companion for toddlers. It displays all the affection and feistiness of its other terrier cousins, but it requires much less physical exercise to keep it happy and healthy.

Originally, Yorkshire Terriers were bred in competition by mill workers in Yorkshire, England, which is how the Yorkie got its name.

I present you with a distinctly American addition to this list that has so far been dominated by Brits.

With an average weight of 12-25 pounds and a height of 15-17 inches, this breed is the 21st most popular in the country.

Boston Terriers, unlike many other breeds so far, have a short coat that ranges from brindle to gray to black (all with distinct white markings that give them their distinctive ‘tuxedo look’) and therefore require much less grooming.

Unlike the Yorkie, the Boston Terrier requires only moderate exercise, making it a great city dog. Its lively, refined, and protective demeanor also makes it a great family dog.

The American native is an upbeat urban gentleman who is easy to train and fantastically sociable.

We jump back across the pond for our next small terrier as our pleasant Bostonian detour comes to an end.

Originally, this breed originated in the flat, less rugged English south, surrounded by farmer’s fields, airy, deciduous woodlands, and plenty of holes dug into the earth where the dog could flush out the small game.

In spite of its two-hundred-year career as a huntsman, the breed still remains as animated and energetic as some of the other breeds on this list, and owners should provide ample exercise for him.

With the last dog on this list, we return to the Scottish highlands for the rugged Cairn Terrier.

One of Scotland’s earliest working dogs, this hardy, pint-sized adventurer is an average weight of 13-14 pounds and a height of 10 inches.

Despite its weather-beaten heritage and shaggy coat (which comes in a range of charming colors from cream to deep red to apricot and black), this curious, loyal companion is just as comfortable on an adventure as it is snugly nestled in your lap.

We’ve come to the end of our list – there are so many other terriers to discuss, but we’ve got to stop somewhere!

There may be some more questions you have about terriers as a breed. Here are some brief answers to some of those questions.

What is a terrier?

The word terrier comes from the Old French phrase Chien terrier, meaning earth dog. Snout to the ground, peering into warehouses and food stores to catch rats and mice, it’s a pretty accurate description of how the breed was most famous. Their animated nature and fearlessness can be attributed to their hunter’s instinct, which was developed originally for this purpose.

In spite of this, we have discovered that there is a lot of variation between the breeds, with differences in size, coat, and personality.

Terriers have a wide variety of coats, not just in color, but also in texture and length. There are thin coats on Boston Terriers, silken coats on Yorkshires, and double coats on Westies. A dog’s grooming is an important part of caring for him, and you can find more information on the American Kennel Club’s website.

Despite terriers’ happy, confident, and energetic personalities, the amount of exercise they require varies from breed to breed – although they might be able to beat you for stamina!

We have come to the end of today’s article. Would you like to know which terrier is my favorite? My heart is an adventurer, but most of the time I just want to curl up on the couch. There is a lot of similarity between me and the Cairn Terrier.