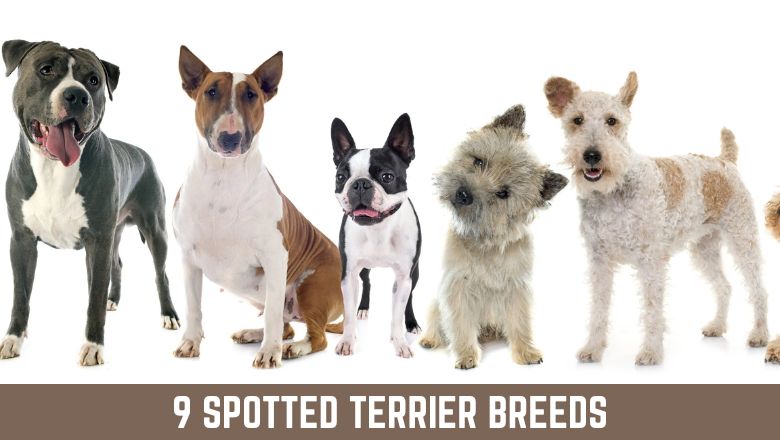 In this article, you will get to know all details about “9 Spotted Terrier Breeds“.

There will never be a dull moment when you have a playful Terrier companion by your side.

In general, terriers can be described as large dogs with small bodies, which means that they tend to have huge personalities and lots of self-confidence.

You have a choice of 31 recognized breeds of terriers, according to the AKC.

If you want a spotted terrier, what do you do?

Can you tell me how much more limited your choices are?

As you can see, I have listed nine terrier breeds with spots in this list.

Here are some interesting facts about these adorable dog breeds so you can make an informed decision.

There are many UK-derived terrier breeds that you will see.

In centuries past, they were specially bred to hunt down and kill rats and mice.

There are also breeds that can handle larger animals like foxes, ducks, badgers, and rabbits. Above or below ground, they can hunt in any environment.

In this article, you will learn:

Among all the dogs in “Dogdom,” the Bull Terrier is one of the funniest and most mischievous.

Known as “eggheads,” these pets are energetic, strong companions who love affection and exercise.

A Bull Terrier has an egg-shaped head, pointed ears, and small triangular eyes that sparkle with humor.

Their spots, however, are a different story.

There are black spots on the nose and eyes of White Bull Terriers. White markings may be present on the head or body of colored Bull Terriers.

There are two types of coats they can come with, along with their spots.

Including an attractive brindle striping, white, and any other color. White markings or solid colors are both acceptable.

Strength and balance are hallmarks of a well-bred Bull Terrier.

Bull Terriers need four ingredients to be happy: early socialization with dogs and people, firm but loving training, plenty of exercises, and quality time spent with their people.

It is important for your companion to meet these requirements if you want him or her to be loyal, affectionate, and entertaining. “Personality breeds” at their best.

Is the size and weight of Bull Terriers putting you off the idea of owning one?

Would a miniature Bull Terrier be a good choice?

In many ways, they resemble their larger cousins.

Spots do appear on them.

A black nose could almost be described as a spot on white Minis with black spots over their eyes.

It is also possible for a fawn and white dog to have a darker spot around its eyes or on its face.

Dogs like these are playful, mischievous, and bursting with terrier fire.

In dogdom, the Mini is known as the clown prince. As cute as a toddler or a class clown, the Miniature Bull Terrier is full of mischief.

The body is square and the head is egg-shaped.

In addition to being active and fearless, these tiny, muscular terriers can be entertaining as well.

The more high-jinxes your Miniature Bull Terrier puppy has, the worse it will be for him.

It is impossible to find a more entertaining companion than him. By socializing him early and training him patiently, he will become the best version of himself.

It is difficult to tell the difference between the two breeds.

However, there are only a few differences between them.

There is no doubt that Parson Russell Terriers are strong and intelligent dogs.

While they can run with horses, they can also dig into foxes’ dens to flush them out. A PRT is an independent problem-solver who is capable of coming up with their own solutions.

When in peak condition, Parson Russell Terriers stand 12- 15 inches high at the shoulder and weigh 13-17 pounds.

The animals are covered with two smooth or broken coats, and they can be found in a variety of colors.

The coats of these animals are coarse, and they sometimes have beards on their faces.

The Parson Russell Terrier has brown and black spots over its head, as well as a large spot on its body in some cases.

This dog must be able to get plenty of exercises since it is an active breed.

It is the best thing in the world for them to be free of the leash and to smell something new as they walk in the park.

It is generally considered to be a healthy breed, the Parson Russell Terrier.

In order to avoid genetic eye issues, it is recommended to buy a puppy that has been tested for eyes.

Even though the adorable Russell Terrier looks like a toy, it is a hardworking and eager working dog.

A dog’s coat is primarily white, but it may be marked with tan, dark, or both types of markings.

Despite their independence and confidence, Russells walk with a natural, fluid gait.

A broken coat refers to a mixture of rough and smooth coats or a combination of both.

When compared to a smooth-coat dog, a dog with a broken coat may have longer hair on its face or tail.

There are large brown spots covering the eyes and ears of the Russell Terrier.

It is legendary how courageous they are.

An American Staffordshire terrier that has been well trained and socialized will always be loyal and trustworthy.

The American Staffordshire terrier is muscular and tall at 17 to 19 inches at the shoulder.

There is a well-defined jawline and cheekbones on the head, and the head is large.

They have dark, round eyes that stand out from the rest of their heads.

Which spots do they occupy?

It is common for American Staffordshire Terriers to have tan or black spots over their heads and bodies.

A dog of this breed can be any color, which includes solid colors and patterns, such as patches and partial coloring.

A member of the AmStaff has a very thin, glossy coat.

Its springy gait reflects the breed’s confidence, and its movements are graceful and agile.

Staff members describe their dogs as alert and curious about their surroundings. Additionally, they love being ‘personality dogs’ and can do anything.

Mental and physical challenges are enjoyable to American Staffordshire terriers. A number of their forays into the showbiz industry demonstrate their high level of training.

It is a small dog with no hair called the American Hairless Terrier.

In spite of its baldness, it is friendly and eager to please.

There are hairless dogs without fur that have colored skin with sable, piebald, or brindle markings.

Spots may be found on their noses, ears, stomachs, backs, legs, and other parts of their bodies.

Approximately 12 to 16 inches of shoulder height are required for the American Hairless Terrier. There is a weight range between 10 and 16 pounds for them.

It is possible, however, for some AHTs to be smaller or larger than the standard or average breed.

Although American hairless Terriers may be small, their personalities are anything but.

They tend to be very energetic and will tell you if something is going on in their heads (or if someone is at the door).

The animals don’t do well when left on their own for an extended period of time.

Because of this, they are excellent pets for large families or urban dwellers who are active.

Teddy Roosevelt coined the Rat Terrier breed, which is a small, tough dog that originated in America.

A playful, mobile, and happy companion, the Rat Terrier comes in two sizes.

Despite their compact size, Rat Terriers are strong and elegant.

A miniature stands 10 to 13 inches tall at the shoulders, while a standard stands 13 to 18 inches tall.

A variety of pied patterns are available for this shiny, smooth coat.

It is possible for Rat Terriers to have brown and black spots over their heads and large black spots on their bodies.

During long work days, these exterminators have smooth muscles that enable them to move efficiently.

You can make the clever Rat Terrier an important member of your family with the right training, socialization, and some forgiving of “bad” habits.

The Rat Terrier has survived his time as a less well-known breed by being bred by professionals and enthusiasts.

In the world of terriers, the Smooth Fox Terrier is known as a gentleman.

Originally developed for British traditional hunting, the terrier is friendly, lively, and gregarious. Their ancestry is closely related to that of Wire Fox Terriers.

Compared to their crispy-coated cousins, Smooths are only 15.5 inches tall at the shoulders. The head is the most distinctive physical characteristic, aside from the coat type.

Compared to a Wire, a Smooth’s head is more V-shaped.

It is possible for Smooth Fox Terriers to have black or brown spots on their heads and bodies.

In traditional British foxhunts, the Wire was a staple.

As a companion and show dog, it is an amusing companion.

There are 16-18 pounds of coiled energy in the Wire Fox Terrier.

The round, dark eyes of this strong, symmetrical hunter shine in its short, rounded back. There is a rough and wiry texture to the predominant white coat.

In order to emphasize the distinctive expression of the face, the ears are neatly folded back.

It is possible for Wire Fox Terriers to have tan, black, or black and tan spots on their heads and bodies.

Wires are the perfect pet for people who are looking for a friendly, upbeat companion with a lot of personality.

As terriers, they have the ability to display independence and prey drive.

Their intelligence and friendliness make them a good choice.

Although training can be challenging, it is not impossible.

It is no surprise that wires make great athletes and are natural comedians.