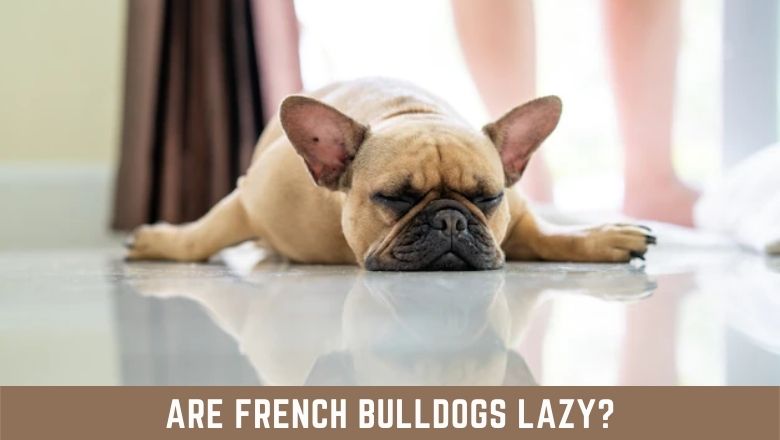 In this article, you will know the answer to the query “Are French Bulldogs Lazy?“.

One of the cutest indoor breeds of dogs, French bulldogs are known for their big bulgy eyes, bat ears, and short legs.

Frenchies have the reputation of being quirky and unique, no doubt about that.

The question, “Why do French Bulldogs sit funny?” has already been discussed in a previous article. The purpose of this post is to explore whether or not French Bulldogs are lazy.

Does it really seem that these playful, loving dogs that you can cuddle all day long are lazy?

Let’s examine it in more detail.

How much do French Bulldogs sleep?

Typically, French Bulldogs sleep 16 to 20 hours a day, but that isn’t the case for all of them.

Your Frenchie’s activity level appears to be the most important factor in all of this. That shouldn’t come as a surprise to anyone, should it?

How you train and educate him to follow your lifestyle pretty much determines everything. In general, your bulldog will get used to an active lifestyle if you take him on vacations, long walks, or outdoor activities. An active French Bulldog won’t feel the need to sleep for so many hours every day.

It is absolutely crucial that you have your French Bulldog follow your own schedule – waking up when you do in the morning and going to bed (and sleeping) when you do. Having a dog that moves around at night, or worse, charges around, will really disturb your sleep. Knowing that most dogs sleep at night while you are asleep is a good thing because it is second nature to them.

The only exception to this rule is Frenchie puppies, or any puppy for that matter, who will not automatically sleep through the night. In the case of very young puppies that aren’t potty trained, some people choose to get up in the middle of the night in order to take them out.

Another exception could be a new Frenchie that you rescued, which might take some time to settle in.

When it comes to how active your Frenchie needs to be, another important consideration is to not force the issue: do not push or force him to be active even when he doesn’t want to be. As an example, if you’re walking your Frenchie and he gets tired, allow him to rest comfortably for ten or fifteen minutes before you resume walking or playing.

Dogs of all breeds usually get between 12 and 14 hours of sleep a day on average.

How long should a French Bulldog be walked every day?

In order to maintain a healthy weight, this dog breed must stay active as often as possible. Walking and playing are essential. Make sure you take your Frenchie out three times a day and do not limit each walk to 10-15 minutes.

A walk of at least 30 minutes per time would be ideal if your schedule permits. You can also take him to a park for some playtime: bring his favorite toys and make sure you train him to be sociable with other dogs. From the time he is a puppy, it is important to train your Frenchie to enjoy walking and be active. Yet, never force your Frenchie to do anything he doesn’t want to. He shouldn’t be forced or dragged to walk a long distance if he doesn’t feel like it.

The physical characteristics of a French Bulldog mean that you must think carefully about how they walk.

A brachycephalic breed, the Frenchie is very hard to breathe, even in the best of circumstances.

Thus, they should not be walked in very hot weather, since they will struggle to keep cool in higher temperatures. When dogs suffer from breathing difficulties, exerting themselves too much in warm weather can send them over the edge. Panting is one of the primary ways that dogs stay cool.

The second thing to remember regarding their breathing difficulties is that they shouldn’t be left running around for more than 5 minutes at a time.

In addition, if they continue to charge around for more than five minutes, you’ll need to give them a time-out. On a walk with them, this means stopping and allowing them to catch their breath for a few minutes, so they can get their breathing under control.

Whenever you play a game with them at home and they have been running for more than five minutes, you should let them recover for a few minutes.

Do French Bulldogs ever rush around or do “zoomies”?

It might shock you when Frenchies suddenly start doing zoomies all over the place if you consider them lazy. How do zoomies work? You can describe this behavior as little outbursts your dog may make, such as running around frantically or spinning. Do not worry, they only last for a short time and are completely harmless, but you have to be careful not to remove anything that may harm them.

If your French bulldog starts running around, what does that mean? It might be a sign of excitement, and they might do it after urinating, or it might be a sign that they have been confined for too long or need to exercise. You might want to consider taking the dog for more walks if the dog is doing zoomies quite often.

What are the (top 5) laziest dog breeds?

Because they are indoor dogs and may sleep for many hours each day, French bulldogs are not the only ones considered lazy. Below are some of the laziest dog breeds:

The basset hound’s long ears and tiny legs would not convince you that it is a hunting dog, and neither would his laziness. This breed of dog enjoys cuddling with loved ones on the couch when it is not hunting.

The pug is Frenchie’s cousin and also a lazy dog breed that enjoys taking naps during the day and will sleep a lot if not trained to stay active.

Saint Bernards are smart, obedient, calming, and great rescue dogs, but the truth is that they’re kind of lazy too. Saint Bernards won’t give you that much playtime.

Bulldogs are another breed related to Frenchies. Bulldogs are great family dogs, but just like their cousins, Pugs, and Frenchies, they also love taking naps on the couch.

Cavalier King Charles Spaniel: small and laid-back, the King Charles spaniel can chase down birds and squirrels but can be a couch potato as well.

Other than their love for napping all day long, Frenchies have some other less-than-pleasant traits, that might be irritating at times:

Despite popular belief, French bulldogs aren’t necessarily lazy. As much as neediness is one of their main characteristics, laziness is not one of them.

But, as with any breed of dog, they can become lazy if they have been raised by owners who don’t walk them very often or interact with them often.

Frenchies enjoy playing chasing games and going for walks, as we discussed earlier.

The intensity of their exercise needs to be monitored since they are brachycephalics (short-nosed) and known to have difficulty breathing.

It doesn’t make them lazy- it makes them careless if they don’t pay attention.