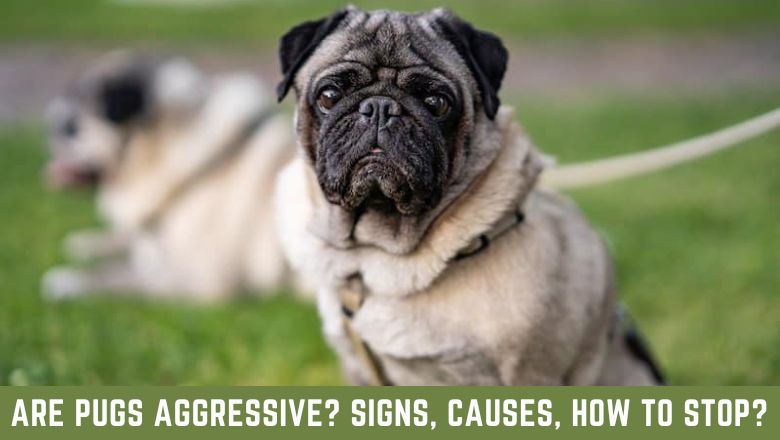 In this article, you will know the answer to the query “Are Pugs Aggressive? Signs, Causes, How To Stop?“.

“Are Pugs aggressive?” A reasonable question for anyone considering bringing this little dog home.

A pug is not considered to be an aggressive breed of dog.

Their sole purpose has been to serve as companions and lapdogs throughout history.

Individuals who are aggressive would not be suitable for this. In addition, only the most placid individuals would be used to breed new generations.

Nevertheless, all dogs are capable of learning to react aggressively under certain circumstances. In order to raise a well-mannered Pug, it is important to train and socialize him diligently.

Our guide to Pug aggression examines the following:

It’s luckily possible to reduce the risk of aggressive behavior in Pugs by doing a few simple things.

The following examples will help you understand:

It is generally considered that Pugs get along well with other dogs and cats (and most pets for that matter). The behavior of some Pugs might differ when they are around unfamiliar animals, however.

It is well known that pugs are great with children, seniors, and adults of all ages. It is possible for unsocialized Pugs to become aggressive (possibly scared) with strangers.

Let’s get started with our complete guide to Pug aggression!

For hundreds of years, rulers and aristocrats have admired pugs, an ancient toy breed.

Their loyal and affectionate dispositions, as well as their human-like facial expressions, make them very popular.

The Pug breed, however, has faced enormous problems with brachycephalic diseases due to the demand for dogs with increasingly flat faces.

Pugs are often surrendered to dog shelters because of the steep cost of treating these problems.

It may be difficult for them to be rehomed once they are there. In part, this is due to the need for ongoing medical care, and in part, it is due to adopters’ concern about the possible risk of aggression in dogs with unknown histories.

What are the chances of a Pug acting aggressively?

In order to understand why aggressive behavior happens, let’s take a look at what triggers it.

It is possible for all dogs to act aggressively.

It would have been essential to the survival of their wild ancestors. These instincts haven’t been lost, even in lovable lap dogs like Pugs.

Some dogs are more likely to behave aggressively than others due to a few risk factors.

According to several studies, male dogs across many breeds are more likely to use aggression than female dogs. It’s likely that male dogs encounter more threats because they roam more widely in search of mates.

Dogs that are older are also more likely to reach aggressively than dogs that are younger.

In older people, this can result from health problems linked to aging. Alternatively, it may be caused by cognitive degeneration (dementia) resulting in panic and confusion.

It is also more likely that dogs will behave aggressively if they lack general obedience training and are punished for aggressive behaviors.

More than anything else, aggression in dogs is a learned response to threatening experiences.

In other words, Pugs are more likely to react aggressively to very specific triggers than to everything.

Next, let’s take a look at some of those triggers.

Now that we know what causes aggression in some Pugs, let’s talk about why it happens.

The stakes are high here.

It’s not the case that pugs are born as domestic angels. It is important to socialize them from the time they are puppies. Socializing your dog insufficiently is one of the best ways to encourage poor behavior.

Hand-rearing puppies from birth is the best way to ensure their wellbeing. As a result, they become accustomed to human touch, smells, and sounds. In addition, it replaces any aggressive instincts with desired social behaviors.

Any aggression, violence, or abuse inflicted upon a Pug puppy during this very delicate stage of its development will not be forgotten, and this puppy may develop aggressive behaviors as it grows.

Likewise, a puppy’s new home influences its character. This pup will attempt to protect itself as best it can if it is given a hostile or neglectful new owner.

It is common knowledge that rescue dogs can suffer from anxiety or PTSD due to past trauma. The phenomenon is real and is a major cause of aggressive behavior in dogs. The behavior of any dog who has been exposed to trauma is likely to change.

A single incident could result in abuse accumulating over time or it could be the culmination of years of abuse. It is typically pugs who have been exposed to violent or abusive home lives that develop these emotional problems. As a result, they become fearful, and aggressive behavior develops as a protective mechanism.

Feeling unwell or in pain causes us to behave differently. There is a possibility of aggression as a symptom. It’s the same with Pugs.

There is often something wrong when this happens. A significant amount of pain or discomfort may be experienced by them. Due to their inability to talk, pugs use this method of communication.

There is no doubt that pack dominance is ingrained in the genetic makeup of dogs. There’s no comparison between a Pug and a German Shepherd here, but let me explain.

The Pug world is usually pretty low-key about dominance, but in some cases, it could be causing your Pug to act aggressively.

Preventing this is best accomplished by nipping it in the bud as soon as it begins. Don’t be afraid to assert your position as alpha (even if you’re the only two in the pack).

When you were a child, did you fight with your brothers and sisters over food? It must have gotten pretty intense at times if you did. You don’t want to give up that last piece of chocolate cake, no matter how delicious it is.

There’s nothing wrong with admitting it. Our favorite foods can sometimes make us snarky. In the same way, our Pugs are no different.

You’re probably already familiar with the Pug’s insatiable appetite if you own one already. Food is one of their biggest passions.

There is a well-known phenomenon in the dog world known as food aggression. It is genetically programmed in dogs to protect this valuable resource.

You don’t let them know you have three months’ worth of bulk-buy dog biscuits in the garage or another Costco trip planned.

Considering it this way, we could actually say that their behavior is more justified than ours.

That’s it. It is unlikely, but there are several reasons why a Pug might become aggressive. Among other possible aggression triggers are:

Are Pugs Aggressive To Other Dogs?

The incidence of aggression between Pugs who live together is rare, but it has been documented.

In many cases, dogs become reactive towards other dogs if they have an unpleasant experience, which creates a fear response.

In some cases, this type of reactivity is specific to dogs of the same breed, color, or shape.

It is also possible for pugs to have aggressive relationships with other dogs they live with.

Possessive aggression (resource guarding) is the most common type of aggression between cohabiting dogs.

It is usually the youngest dog or the newest member of the household who acts aggressively towards the older dog in a pair.

Are Pugs Aggressive To Strangers?

A dog is more likely to act aggressively towards a stranger than towards someone he already knows.

There is also a greater likelihood of stranger-directed aggression in smaller dogs such as Pugs than in larger breeds.

However, socialization before 12 weeks of age reduces the likelihood of a Pug being aggressive toward strangers.

Classes for puppies are a good way to accomplish this, and dogs who attend them show a decrease in aggression towards strangers.

Creating a positive association between your dog and meeting new people is the essence of socialization.

It is less likely for dogs to react aggressively to a new person when they believe the meeting is going to be a happy and rewarding experience.

Are Pugs Aggressive Towards Their Family?

Dogs are known for being affectionate and sweet towards their owners.

It is possible, however, for them to learn to react aggressively if their family uses physical punishment on them.

According to a study, dogs (generally, not just Pugs) who attend obedience classes are also more likely to be aggressive towards their family members.

Research suggests that people are more likely to enroll their dog in an obedience class if they are already concerned about aggressive behavior.

It is also more likely that rescue dogs will be aggressive towards their families.

A fear response created before they came home may have unwittingly been triggered by their new family.

A behaviorist can help identify the reasons for family-directed aggression and devise a strategy to overcome it.

Are Pugs Safe With Children?

It’s more likely that a dog will bite a child from their own family if they disturb them while they’re sleeping, eating, or playing with a favorite toy.

Children who come into the dog’s house (rather than going for a walk) are more likely to get bitten by unfamiliar dogs.

A dog that bites a child often has an underlying health condition that causes them pain, or an anxiety disorder.

Regardless of whether you believe either dog to be peaceful, trustworthy, or reliable, all dogs should always be supervised by all children.

How To Stop A Pug From Biting

Pug aggression is typically the result of upsetting experiences in the past, which make Pugs fearful next time, and feel like they need to defend themselves.

It’s a good thing we have great control over the experiences our dogs have, so they don’t learn to be aggressive as a result!

Pugs can be prevented from acting aggressively by following these steps:

The idea that neutering can stop many unwanted behaviors in dogs – especially male dogs – is a common misconception.

There is no evidence that neutering reduces aggression toward strangers or other dogs.

The study found that male dogs who have been neutered or spayed between the ages of 7 and 12 months are significantly more likely to be aggressive towards strangers, with one exception.

Despite this, it’s unclear why it’s the case – even though it could still be disputed.

Observations on the biting of Pug puppies.

During their relentless biting stage, puppies seem to be determined to sink their teeth into you at all times.

When your puppy bites so much, it can feel as if there’s something wrong with him.

Is there a character flaw that makes them aggressive for the rest of their lives?

It doesn’t hurt nearly as much through a protective fur coat!) and soothes teething pains and aches. Puppy biting is a natural way for them to explore their environment, play together, and explore the world.

It is possible to avoid being bitten by a Pug puppy through patience and consistency – check out this article for more help and reassurance!

That’s all I have to say.

However, pugs are capable of aggression, even though they are not usually considered an aggressive breed.