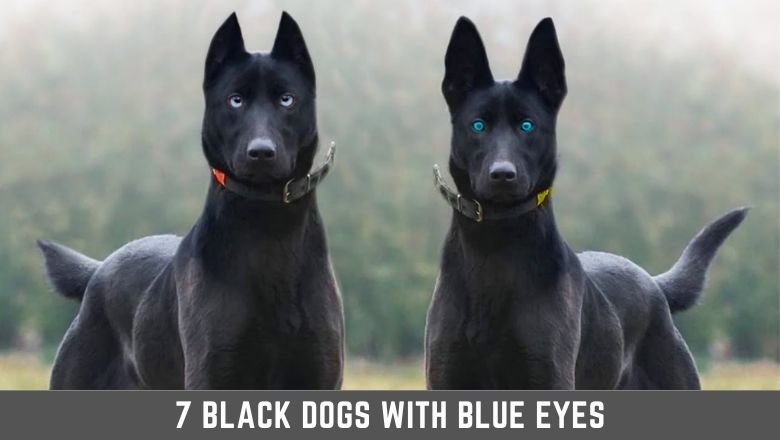 In this article, you will know the answer to the query “7 Black Dogs With Blue Eyes“.

In the fashion world, there is a famous saying about whether black and dark blue should be paired together.

Wearing them together may not be a good idea, according to conventional wisdom.

It’s the same with dogs as well.

When it comes down to it, “solid” black dogs with blue eyes are a bit of a contradiction, and it is probably best if you avoid them.

A dog with a solid black coat must have brown or black eyes.

If the dog itself is bred from, this is for the health of the breed as well.

Here are the ways in which blue eyes are acquired by dogs.

4 reasons that dogs have blue eyes

Dogs have dark brown eyes in the vast majority of cases.

Dogs, however, have blue eyes when they are born.

Typically, by the time dogs are four months old, their eyes will have turned brown.

How can blue eyes be caused by exceptional circumstances?

There are four possible reasons, and I will go into a bit more detail about two of them:

The Merle gene can cause blue eyes

Dogs’ coats are characterized by a blotchy pattern called Merle.

Genetic factors disrupt the pigments in the coat, causing it.

In some parts of the coat, the color appears to be vibrant, while in others, it appears faded.

It would be like washing a white shirt with a red or blue pair of pants at the wrong temperature.

Their coat color isn’t the only thing affected by this.

The noses and paws are now pink instead of black.

Next, let us look at the second reason why dogs may have blue eyes

According to a study involving six thousand dogs, Siberian Huskies and Australian Shepherds may possess a gene that makes their eyes blue.

We just discussed the merle gene, but these genes are not related to it.

Researchers have identified a separate gene named ALX4 as the cause of the color change.

Having looked at the causes of blue eyes, let me now explain some of the dangerous health issues caused by blue eyes.

In addition to causing blue eyes in dogs, the merle gene is thought to lead to blindness and deafness as well.

Due to their origins as the offspring of two merle dogs that mated, these dogs are called “double merles.”

The American and British kennel clubs are both aware of the threat and are doing what they can to be proactive about it.

As early as 2012, the Kennel Club (a UK-based organization responsible for the protection and promotion of all dogs’ health and welfare) banned the mating of merle dogs to merle dogs in specific breeds.

The Kennel Club banned all merle dogs from breeds that have no significant history of the color in the breed in January 2020.

And the American Kennel Association (AKC) is doing their bit too.

One hundred and ninety-six purebred dogs are registered with the AKC and each has a breed standard.

In other words, there is an extensive list of characteristics that a dog must possess in order to be fully regarded as an acceptable example of its breed.

A solid black dog cannot have blue eyes under any of these breed standards.

On the other hand, there are some dogs with partly black coats with blue eyes.

These will be discussed in the next section. 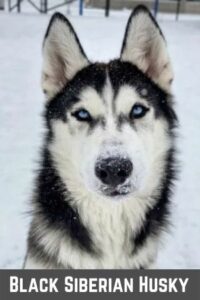 Perhaps the most famous and iconic breed of blue-eyed dogs today is the Siberian Husky.

Its most common color is gray and white, but it can be any color from black to pure white.

Huskies can have brown or blue eyes.

The Siberian Huskie is a medium-sized dog that stands around 22 inches or 56 cm tall and weighs about 50 lbs or 22.6 kg.

A great family pet, they require a lot of exercises regularly.

You can walk a lot, run with a partner, or pull sleds with someone.

In fact, they are so friendly with people that they would make terrible watchdogs. 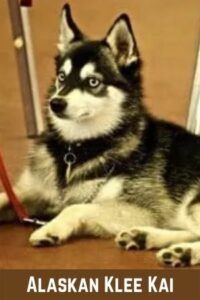 I have an alternative for people who like the look of a Husky but can’t accommodate a 22″ and 50-pound dog in their home.

There are actually three sizes:

Breeds such as this are not recognized as purebreds by the American Kennel Club.

Klee Kais are available in black, grey, or red.

Eyes can be a single color or a combination of colors (which means that each eye may be a different color).

In Alaska, Klee Kais need about forty minutes of exercise a day.

In comparison to their bigger cousins, they are more affectionate and wary of strangers. 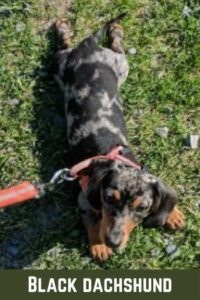 While individual dogs like these might be available, it is better to ignore them and move on if you want a blue-eyed black or black and tan Dachshund.

In accordance with the breed standard, blue eyes are only allowed for dappled Dachshunds.

Therefore, you are looking for a black Dachshund with lighter spots on its top.

However, piebald dogs have a couple of colors on their coat with patches of white on top.

There are endless combinations of Dachshunds.

I would like to discuss coat “texture” and weight before I get into coat colors and eye colors.

There are two types of Dachshunds: large and small.

There are three types of coats: smooth, longhaired, and wire-haired. 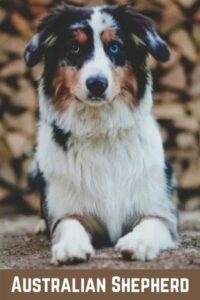 The Australian Shepherd is our next black dog with blue eyes.

An Australian Shepherd is known for its white neck, chest, and forelegs. However, the color of the rest of his coat can vary greatly from a solid “black” to a “red tricolor” to a “blue merle”.

There is a lot of variety allowed in the eyes of Australian Shepherds, which makes them quite rare.

You may choose brown, blue, or amber (or any combination of them).

Australian Shepherds are a breed of dogs that have been developed as herding dogs since the nineteenth century.

In order to keep them happy, they need a great deal of exercise, and they don’t do well being left on their own for too long. 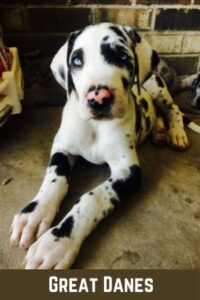 Isn’t it true that all the dogs we have mentioned up to this point are lovely, but they just don’t…

If you want a black, blue-eyed dog that is as big as you can, then why not get a Great Dane.

As long as the pattern is harlequin or merle, you can choose beautiful piercing blue eyes.

Identifiable as the Dalmatian look, the Harlequin coat is white with black streaks.

Grey with black splodges adorns a merle Dane’s base color.

Their size is the most striking characteristic of these dogs.

A large dog requires a lot of space and a lot of food.

Despite the fact that these dogs are quite happy to lounge around at home, they do need quite a bit of exercise.

How about those blue eyes? You’ll have to get used to them because these dogs love nothing more than spending time on your sofa with your parents. 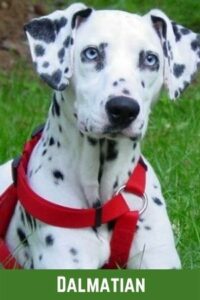 Is it too much?

What are the size of the food bill and the thought of sharing the sofa giving you heart palpitations?

Would it be possible to scale down the model?

Dalmatians come in a range of colors, such as liver, white, or black and white, and blue eyes can be found in either of these colors.

The Dalmatian breed has a long history in Croatia, but its popularity was much greater in England during the nineteenth century.

The dogs were primarily responsible for guarding the horses that pulled the “fire engines” in the U.S.

Since these dogs can’t be content without vigorous exercise, they’re not happy. 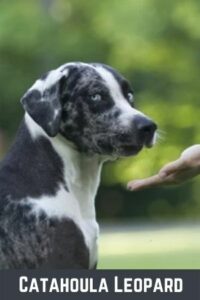 One of the dogs on my list is a bit unusual, as it isn’t a registered purebred dog with the AKC.

However, it is part of their foundation stock service, which is a safe way of developing purebred dogs.

It doesn’t have a breed standard as it isn’t registered with the AKC.

There is, however, a United Kennel Club standard for this breed.

As for coat colors, almost anything goes- although the most popular combinations are merle, brindle, black and tan, and blue.

If you want some black, you should look for a dog with a merle pattern, in which black spots rest on a grey and red base.

Dogs of this breed are known for being extremely protective of children and for coping well in hot or cold climates.

Providing the dog with the lots of exercises it needs, it could be your perfect black dog with blue eyes.

Dogs with blue eyes that shouldn’t be black (AKC)

Look at the list, see if any of the colors are black, and then add them!