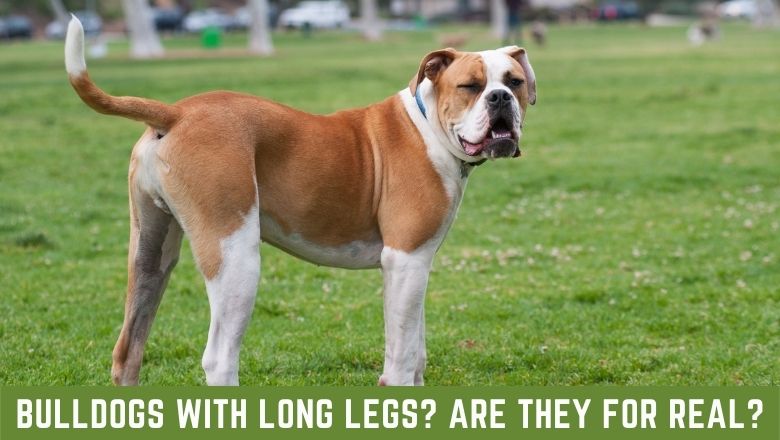 In this article, you will know the answer to the query “Bulldogs With Long Legs? Are They For Real?“.

Isn’t it adorable to see bulldog puppies? Even though you feed and cuddle them until they are about ten weeks old, you start noticing something strange.

Can you tell if your pet’s legs are getting longer than they should be or if it’s just imagination? No, it’s not just your imagination either, some bulldogs actually do grow taller than their breed’s average height, and there are several reasons why this occurs.

Why do some bulldogs have long legs?

Where did he get the dog from and is it purebred? Was that breeder dishonest? It has been known for such things to occur, so it is not surprising to see them.

Throughout history, bulldogs have been crossbred to eliminate certain characteristics or to enhance others.

Alternatively, your dog’s long legs may be a result of genetics only. There is a well-established fact that even the same pair of dogs can produce litters with different characteristics.

Dogs have two sets of genes, one from the mother and one from the father, just like humans. A puppy’s appearance depends on its genes, and it’s very possible that the long legs you have in your bulldog didn’t come from the parents, but from distant grand-grandparents. Also consider the length of your nose, the size of your head, and the color of your coat.

Which types of Bulldogs are known to have long legs?

In England, all bulldog types that exist today can be traced back to the bulldogs that were once used for livestock guarding and to perform the bloody practice of bull-baiting, which was outlawed in 1835. Breeders then focused on preserving the Bulldog breed and reducing its aggressiveness.

Bull-biting dogs, however, tended to have shorter legs and a shuffling gait, making them more athletic than modern bulldogs. The selective breeding process transformed those large and aggressive dogs into the gentle pets we know today.

In addition, there are many local subtypes that have been created through various selective breeding processes.

An American type can be distinguished by its long legs if you consider the English purebred as representative of the species.

In the 1950s, after bull-baiting was outlawed, some immigrants brought the hard-working Olde English bulldog to the US, where it was put to work on farms.

It was created by two breeders Allan Scott and John D. Johnson who worked together for a time before parting ways because they had different views on what traits an American Bulldog should have.

The legs of his dog are set under the body and do not curve to the outside like those of more traditional bulldogs, such as the Johnson American Bulldogs.

American Bulldogs are similar in height, but Johnsons are more massive with heavy bones.

An Australian Bulldog is very similar to an English Bulldog in temperament and appearance and can grow up to 20 inches tall.

Ca de Bou is a Spanish breed that originated on the island of Majorca. It is the offspring of a bulldog and mastiff cross-breed. The Spanish Bulldog is between 20 and 23 inches tall.

Continental Bulldogs, which have been recognized in some European countries since 2005, are also much more athletic crossbreeds. They are slightly taller than English Bulldogs.

How tall should a purebred English bulldog be?

How long should a Bulldog be?

English Bulldogs are between 20 and 27 inches long when they reach maturity. The dog’s snout to tail length is measured in this way. The bulldog, however, has a large head. Between 12 and 16 inches is the length of an English Bulldog from neck to tail.

When do bulldogs stop growing?

Breeds of smaller size mature faster than those of larger size. English Bulldogs are considered mature when they reach 12 months of age, whereas American Bulldogs reach maturity at the age of two.

Interestingly, English Bulldogs typically reach their adult height (14-15 inches) at one year, but in terms of their weight and muscle mass, they will continue to grow for the next six months.

Soon after turning one, they reach an adult weight of approximately 50 pounds. Bulldog owners should keep an eye on their dog’s weight. Compared to other breeds, these dogs require less exercise and are less energetic.

However, they do require some exercise since they are prone to obesity. In hot weather, bulldogs should not be forced to exercise due to their short snouts that cause breathing problems and impede their ability to cool off.

During their growth period, bulldogs require a lot of protein to develop the broad stance and wide shoulders they’re famous for. You should remember that a bulldog will continue to grow until he turns 18 months old.

From an emotional perspective, they continue to develop until the age of three years if they reach physical maturity between 12 and 18 months. They need to be socialized and exposed to positive experiences strongly throughout this period.

What are the most popular types of Bulldogs?

The English Bulldog and the French Bulldog are by far the most popular types of bulldogs, owing to their cute faces and gentle temperaments. These dogs make excellent pets due to their playful nature, especially the Frenchies, and fierce loyalty to their owners.

As a result of selective breeding, these two breeds are also the most prone to health issues. Breeders created dogs with a juvenile appearance in order to appeal to the public, even though these cultivated features contribute to reduced lifespan and poor quality of life.

Over the past few decades, French and English bulldogs have been bred to have flat faces and extremely short snouts, causing various respiratory problems.

Bulldogs have the highest percentage of hip dysplasia among all breeds, according to a study by the Orthopedic Foundation for Animals.

It causes them to have trouble walking. When the disease progresses the dog struggles to walk and develops a bunny-hop which can seem funny, but the truth is that the dog suffers from stiff joints and pain in the affected leg.

The dog eventually begins to limp and will not participate in activities he once enjoyed or even exercise. It is the direct result of selective breeding to make the animal’s limbs shorter and more outward bent. The American Bulldog is healthier and has fewer health issues in this regard.

What other breeds of dogs are bulldogs bred?

According to experts, the only way to save the bulldog is to crossbreed with other types of dogs to reduce or eliminate some of these characteristics. The purpose of crossbreeding bulldogs and mastiffs is to produce puppies that have longer and thinner legs.

In maturity, the Masti-Bull grows to 30 inches tall and weighs 100 pounds, making it a giant dog. The females of the breed are slightly smaller. Although they still experience hip dysplasia, this breed has long and strong legs. Despite its size and need for some serious training, the Masti-Bull makes an excellent pet and does well with children.

The English Bulldog can also be crossed with a Labrador to create a Bullador that is up to 25 inches tall.

Bull Jacks, a cross between a bulldog and a Jack Russell Terrier, grow up to 15 inches tall but have straight, thin legs.

A bulldog crossed with a boxer will give birth to a tall dog called a Bulloxer, which reaches 27 inches in height at full maturity.

Long legs are not bad!

Should you be concerned that your pet bulldog is taller than he should be, you should consider that it may be better like this for the dog.

Due to the short outward bent legs of the standard English bulldog, it has mobility problems and a great deal of pain with age.

It’s possible the dog isn’t as purebred as you thought when you bought him, maybe it’s just genetics. However, if you aren’t planning to enter your pet in a dog show, you have no need to worry. Take care of them as they are!

Bulldogs With Long Legs? Are They For Real? (Watch Video)