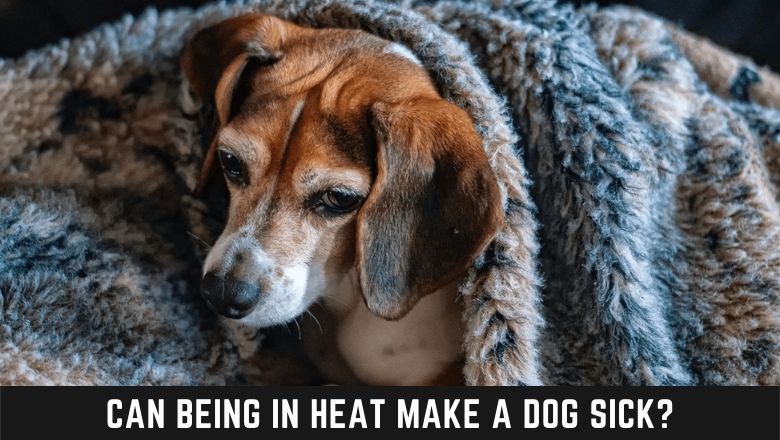 In this article, you will know the answer to the query “Can Being In Heat Make A Dog Sick?“.

Have you ever lived with a dog experiencing an unpleasant heat cycle? Do you have an intact female dog? In the heat, female dogs can be very uncomfortable and stressed, and it is not uncommon for them to get sick.

During heat, dogs may vocalize more, cry a little, bleed, and behave differently. The entire process is often very unpleasant for both the pet parent and the dog. However, if you understand what’s going on better, you can make your dog feel much better.

What do we mean by “being in heat”?

Whenever a dog is in heat, it means she is getting ready to reproduce or she is already fertile. An intact female dog is in heat when she has reached sexual maturity and is ready to mate and give birth to puppies. In most dog breeds, female dogs experience their estrus cycle or “will be in heat” once or twice a year, but for some breeds, it can be as often as every four months.

How do you know if your dog is in heat?

Both physical and hormonal changes occur during a dog’s heat period, and the changes in their hormones trigger changes in a dog’s behavior. When your female dog is in heat, you will notice all these changes. Every stage of a dog’s estrus cycle is characterized by certain physical and behavioral changes.

Here are some things to expect from a female dog in heat;

How long does “being in heat” last?

Depending on the breed, the length of the dog’s estrus cycle and the age at which it begins to vary. Small dog breeds usually mature faster, undergoing their first heat cycle around six months whereas large dog breeds become sexually mature between 12 and 18 months or 24 months for very large dogs.

Normally, vomiting is not a symptom of a dog in heat, however, hormonal changes can cause minor digestive problems in female dogs.

If left untreated, Pyometra can be fatal. Dogs with this condition require immediate veterinary care and the cure is the surgical removal of the uterus. Dietary indiscretion, organ damage, or parasitic infections like worms are the most common causes of vomiting in dogs.

As a consequence, vomiting in a dog in heat may result from an underlying disease or dietary indiscretion instead of being solely the result of the heat cycle. Be sure to consult your veterinarian if you observe that your dog’s condition is very unusual.

Why might a dog in heat suffer from diarrhea?

Female dogs may experience some sickness during or after their heat cycle as a result of hormonal changes in their bodies. The dog may have slight gastrointestinal upset, but symptoms like vomiting or diarrhea are not common during an estrus cycle, since these are not normal symptoms.

A dog’s estrus cycle is usually stressful, and confining your young lady might also add to her stress levels, which may, in turn, lead to gastrointestinal upsets.

In addition, if there is a loose bowel movement, expect symptoms to last for only a day and anything longer or more severe with other disturbing signs such as fever, lethargy, increased thirst, pus from the vulva, can be caused by a potentially deadly infection in the uterus; pyometra.

How else might the behavior of a dog in heat change?

In a dog in heat, look out for the following behavioral changes;

Anxiety: During the first few days of your female dog’s estrus cycle, you will notice some behavioral changes. During this period, puppies tend to get anxious because they can sense the changes taking place in their bodies, which causes them to become a little nervous, and clingier to their owners.

Decreased energy: The first phase of the heat cycle can be characterized by low energy levels and extra laziness in female dogs. Some bitches will become extra restless and nervous, whereas others will be extremely lazy. It is important to look for a significant change in one direction or a radical change in behavior. For example, if your dog is normally clingy and affectionate, she may become snobbish and grumpy, while a usually high-spirited dog may become very lazy.

Increased appetite: A dog in heat also has a greater appetite for food, as her body prepares for a possible pregnancy and needs to be nourished for her puppies when they are born. It can also be the other way around, some female dogs have reduced appetites and eat very little.

Tail movement: During the first phase of the heat period, female dogs tuck their tails and fight off any advances from male dogs. During the second estrus stage, females will wag their tails and flirt with males to get their attention and communicate their desire to mate.

How can you help your dog in heat to feel better?

It can be confusing and unpleasant for a teenage dog to be in heat, and she may act extra cuddly or erratic. The following tips can help your female pup get through her estrus cycle if you decide not to breed her.

Your dog may not be seeking your attention during her heat period, but she definitely needs you. It is your responsibility to make sure she is properly cleaned up when she expels liquid discharge to avoid getting your living space dirty. In addition to trimming the hair surrounding her genital area, you may need to get her some dog diapers to contain the discharge if she has a long-haired breed.

Give her more treats

When your dog eats very little during this period, she will need extra treats to make sure she’s getting the healthy amount of calories she needs to keep her energy level up. Provide her with toys or bones she can chew on to help stabilize her mood.

Take her on more walks

Taking our dog for daily walks with a leash can help her work off some anxiety and relax better if she becomes restless during her heat period. You don’t need to walk her on a leash or use a tracking GPS device to prevent her from running off.

What are the advantages of having a female dog neutered?

In case you’re wondering whether or not to spay your bitch, here are a few good reasons.

The uterus is infected with pyometra, which can be deadly. Approximately 25% of intact middle-aged female dogs will have this condition, in which the uterus is filled with toxic pus that can be fatal if not surgically removed. A spayed dog is completely protected from this condition.

It increases the lifespan of your dog

The benefits of spaying your dog include a longer, healthier, and happier life. Science has proven that neutered pets tend to live longer than intact ones because they are less susceptible to certain infections, tumors, and behavioral problems. Dogs that are spayed before their first estrus cycle are less likely to develop mammary cancer.

It prevents heat cycle and pregnancy

In spite of the fact that the heat cycle and pregnancy are both natural parts of female dogs’ lives, they can both be very stressful. Being in heat isn’t fun for the dog or the owner, so having your pet spayed will spare you both the stress of being in heat.

A dog spayed at the wrong age or without proper safety precautions can develop some unpleasant lifelong consequences. When sex at a young age, some health problems can occur, such as hip dysplasia, torn ligaments, bone cancer, and urinary incontinence. Make sure your dog is of the right age for the surgery; this varies for different breeds.

In human females, “being in heat” can be compared to the menstrual cycle, however, dogs experience the estrus cycle, which doesn’t occur nearly as frequently as in humans. In the heat, a dog’s hormones will undergo certain changes causing both physical and behavioral changes.

It is possible that she may become ill or erratic during this time and will need special attention. Female dogs experience the heat cycle throughout their lives, and getting them spayed at the right age is the only way to ensure they live a long and healthy life without the stress of the heat cycle.

Can Being In Heat Make A Dog Sick? (Watch Video)