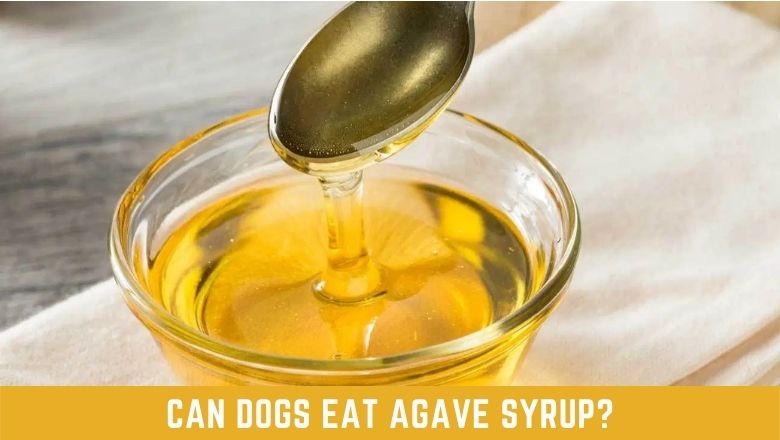 In this article, you will know the answer to the query “Can Dogs Eat Agave Syrup?“.

Several dogs have a sweet tooth, but you cannot put it down to natural selection.

Neither humans nor animals are born with a sweet tooth. You’re probably responsible for your dog’s acquired taste since it’s an acquired taste.

Dog owners now know the dangers of feeding their pets too much sugar, and wonder if agave syrup is a healthier alternative.

The purpose of this article is to look at agave nectar and other so-called natural sweeteners and see if they’re safe for dogs… get ready to be shocked!

What is agave syrup/ nectar?

A growing number of vegans and health-conscious people are turning to agave syrup, which is touted as a healthier alternative to sugar. This product comes from a succulent plant called agave, which is native to regions with warm climates, such as the Southern part of the US or Mexico. Since this nectar or syrup comes from a plant, people assume that it must be healthy or at least healthier than sugar, which also comes from a plant or several.

In this case, the problem with the syrup is that what you buy at the store is a highly-refined and chemically-processed version of agave nectar.

As a result, you get almost pure fructose, which is bad for dogs and their owners.

What nutrients are in agave syrup?

When you examine the ingredients on the label of a generic agave syrup you might find in the store, you’ll realize just how healthy it really is.

Sugars are present in 68 grams of a 100-gram serving. Agave syrup has 68% sugar by weight. There is also 22% water, which leaves you with just 10% nutrients. In addition, you have trace amounts of various vitamins and 1% of dietary fiber.

Agave syrup, for instance, contains 13mg of choline, as well as folate, or vitamin B9, both of which are beneficial for your dog’s health.

Is consuming that much fructose worth the risk of getting these tiny amounts of vitamins?

The high sucrose content of table sugar is demonized, but the fructose in agave syrup, while less harmful to diabetic people or their dogs, can cause liver damage. In comparison to sucrose and glucose, fructose is more difficult to process by the liver.

Last but not least, agave syrup has more calories than sugar, 310 calories per 100g. Even for humans, that’s quite a bit of energy.

Honey vs Golden syrup (corn syrup) vs maple syrup. Which is the healthiest for your dog?

Many pet parents find it difficult to choose a healthy sweetener when making various dog treats. We’ve seen that agave syrup doesn’t do much good for dogs, as we’ve learned from our experience. What other options are available?

It can be used as a natural sweetener for milk and tea, and it has some health benefits because it is rich in antioxidants. Honey is actually worse than agave syrup when it comes to sugar.

Sugar content in 100 grams of honey is 82 grams, much higher than in 100 grams of agave nectar. Alternatively, honey contains less fructose and more dextrose or glucose, another type of sugar that is better for your pet. Honey is often used to treat hypoglycemic or dehydrated dogs.

If your dog has weight problems, you should use honey in moderation since it has the same amount of calories per 100 grams.

You can give your dog a spoonful of honey if he has a sore throat or has seasonal allergies, but don’t overdo it.

Another popular sweetener is corn syrup, also known as golden syrup. The label, however, indicates that it contains 76% sugar. In the calorie department, golden syrup is a little better, with 283 calories per 100g. If you look at its other nutrients, you’ll find that it lacks vitamins and only traces of minerals, such as zinc.

On the market, there are two kinds of corn syrup. We have the regular version as well as the high-fructose version (HFCS).

To feed your pet corn syrup, use regular corn syrup, which is almost exclusively glucose. HFCS has a high fructose content, so stay away from it.

It’s less calorific than other sweeteners, at least the ever-popular maple syrup. A 100-gram serving of maple syrup contains just 260 calories. Furthermore, it contains less sugar, only 60 grams, but it is all fructose, so it is not very healthy for your dog.

The maple syrup, on the other hand, is an excellent source of riboflavin, or vitamin B2, which is necessary for cellular respiration. As this vitamin is involved in iron absorption, riboflavin deficiency can cause various disorders such as stomatitis (inflammation of the mouth), skin rashes, and even anemia.

Maple syrup is your best option if you want to use syrup instead of table sugar for your dog’s treats.

Dogs do not need sugar, according to veterinarians. Carbohydrates are necessary for dogs to produce energy, but they shouldn’t be sugar, cookies, or ice cream.

It doesn’t mean that your dog will be adversely affected if he eats something sweet once in a while. Try giving him a little bit of fruit, some berries, or perhaps some apple or banana slices, and he will receive some natural sugars to maintain his energy levels.

Naturally, if your dog is a couch potato and prone to obesity, you should avoid giving him sugar since it will lead to him gaining more weight.

What are the side effects of a dog eating too much sugar?

Imagine all the bad things that sugar does to humans and then multiply that by a few.

Firstly, too much sugar can cause diarrhea in dogs because it destroys the good bacteria in their guts, which are important for digestion. Basically, if you share a box of cookies with your pet, he’ll be forced to eat nothing but rice and plain chicken for a few days, until his stomach settles down.

You know sugar causes cavities because it feeds the wrong kind of bacteria that multiply and destroy teeth enamel. Keep in mind that sugar is bad for humans as well, even if they brush their teeth twice a day, which your dog likely doesn’t.

Dogs who are hyperactive can also be given too much sugar, so if your dog already has too much energy for you to handle, he doesn’t need sweets.

The best thing you can do for your dog is to use alternative products as sweeteners, even though that’s harder said than done.

The raw honey you’ll find in most stores is safer than store-bought honey. Most of the antioxidants, vitamins, and minerals in these products are destroyed as a result of pasteurization at temperatures over 70C.

Sweeteners such as Stevia are also becoming increasingly popular. It is derived from the leaves of the stevia plant and is much sweeter than sugar, which is good since you only need a small amount for your dog’s treats.  Green Stevia is less processed than white Stevia and contains vitamins and minerals such as calcium, magnesium, zinc, iron, and magnesium.

It can be called chocolate for dogs. Carob powder comes from the beans of the Carob tree, which grows in the Mediterranean region, and it tastes like chocolate, but it is caffeine-free, so dogs cannot be poisoned. Additionally, it is a good source of vitamins A, B, and D, as well as minerals and fiber. Despite the fact that carob powder isn’t as sweet as sugar, you can use it to make tasty ‘chocolate’ cookies for your dog.

Let’s put it this way – it’s not the worst thing in the world, but it’s not exactly healthy for your dog. The majority of Agave syrup is sugar, and a very bad type of sugar at that, plus it contains too many calories. There are only a few good nutrients found in agave syrup, so feeding your pet that much sugar isn’t worth the risk. You can use raw honey or maple syrup for dog treats if you need a sweetener.

Also, you can try using stevia or carob powder, which works as well or almost as well as chocolate for your dog. He probably won’t notice the difference.