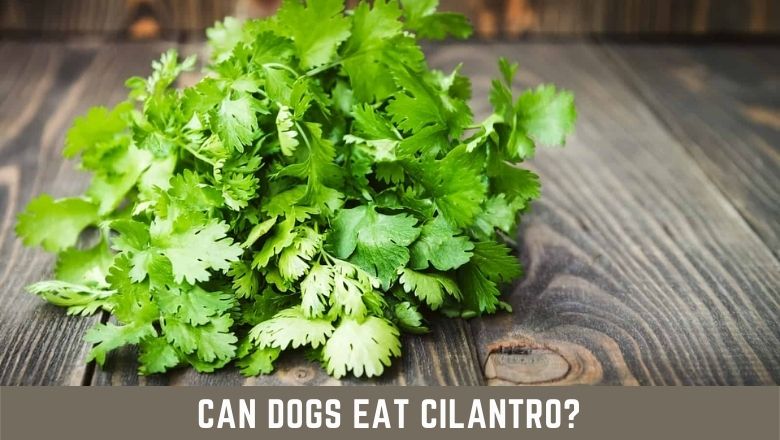 In this article, you will know the answer to the query “Can Dogs Eat Cilantro?“.

You probably wonder if your dog can eat Cilantro if you’re making a dish with the herb. Aside from tasting delicious, the delicate and gentle green leaves also provide us with many health benefits. Does our dog enjoy the same benefits? Can they consume cilantro and reap the same health benefits as humans? Let us give you the short answer for now.

Dogs can consume cilantro in moderation as it contains essential vitamins and minerals that are great for dogs. Dogs can also benefit from cilantro’s ability to soothe upset stomachs and relieve digestion problems. Even though it’s good for dogs, it shouldn’t replace their regular diet.

Can dogs have Cilantro?

Cilantro is an annual herb, and while you can eat all parts of it, most people prefer to use the fresh, bright green leaves and the flavorful stalks as a garnish or seasoning.

Those who use the dried seeds of this plant as a spice will also use the plant’s seeds as a food source. The seeds of this herb are called coriander and are usually used as coriander spices.

Clearly, this plant is versatile, and it can be found in many Indian, Chinese, Middle Eastern, and Mexican dishes. Cilantro goes by many names, such as coriander, Chinese parsley, dhania, or Mexican parsley. In fact, cilantro is the Spanish translation for coriander.

Here is a quick explanation of the difference between cilantro and coriander.

In the US, the word “Cilantro” is used to describe green, fresh leaves. Both the green leaves and the spice are known as coriander in many European countries as well as the UK. In India, the green leafy herb was called “dhania” to differentiate it from coriander seeds.

Is Cilantro bad for dogs?

It is not bad for dogs to eat cilantro. In contrast, if you give your dogs too much cilantro, they might experience mild digestive issues such as diarrhea, vomiting, and nausea.

Whenever you introduce a new food to your dog, be sure to introduce it slowly and gradually. Do not overdo the Cilantro at once. If you suddenly give your pooch too much of it, it can be overwhelming, surprising, and frightening for him.

Adding a small amount to his meal will allow him to gradually become accustomed to Cilantro and to explore the taste without feeling overwhelmed by it.

Is Cilantro good for dogs?

Cilantro is good for dogs if consumed in moderation. Dog owners can give Cilantro to their pooch as a treat or mix a small amount of Cilantro into high-quality dog food from time to time.

The health benefits of cilantro extend to our four-legged friends, as well.

Furthermore, the fresh green leaves contain the following properties and act as a detoxifier:

Cilantro contains compounds that chelate toxic metals that have been accumulated in the dog’s tissues and help to get rid of them.

A dog can be exposed to heavy metals through certain types of vaccinations, environmental pollutants, contaminated water, or certain household products.

Let your dog’s body naturally detox by adding a small amount of cilantro to their daily diet.

Vitamin A, C, and E in Cilantro provide dogs with antioxidant support

Cilantro is rich in antioxidants, including vitamin A, vitamin C, and vitamin E. These nutrients protect the dog’s cells against the damaging effects of free radicals. Cancer and heart disease are among the diseases caused by free radicals.

The free radicals can damage cells in dogs, causing them to age, inflame, and become ill.

A major antioxidant vitamin found in cilantro is beta-carotene. Cilantro contains more than 157 grams of beta-carotene per cup.

Cilantro has phenolic compounds which help your dog fight against infections

Is Cilantro safe for dogs?

As we can see, dogs are safe to eat cilantro. Cilantro is not poisonous or toxic to dogs, according to the American Society for the Prevention of Cruelty to Animals (ASPCA). In order to be safe, you should first confirm that your pup does not have any plant-based allergies before giving them Cilantro.

If you’re feeding your dog Cilantro, keep in mind that moderation and consistency are key. As we discussed above, giving your pooch too much Cilantro suddenly or often is actually going to upset his stomach.

Following your introduction to Cilantro, your furry family members will want a routine.

How to serve Cilantro to your dog

Cilantro seeds and powder are safe for dogs to eat, but fresh Cilantro leaves are best. Having more vitamins and minerals in the green leaves will benefit your pooch’s health more.

You will need to wash the Cilantro leaves, break off the stalk, and chop the leaves into small fine pieces before serving them to your furry friends. These can then be added to the main meal of your pup.

So, can dogs eat Cilantro?

Cilantro is a versatile plant that contains many vitamins and minerals beneficial to pets, including vitamins A, B, C, and E.

It is best to avoid negative side effects such as diarrhea, vomiting, and nausea by only feeding your pooch Cilantro in small moderate amounts. This can be done by giving the dog treats with cilantro. In some cases, owners will add cilantro to their dog’s main diet as a supplement to increase their pet’s health.

Please consult your veterinarian if you suspect that your dog may be allergic to Cilantro before feeding them this herb. If they are allergic to this herb, do not feed them Cilantro.