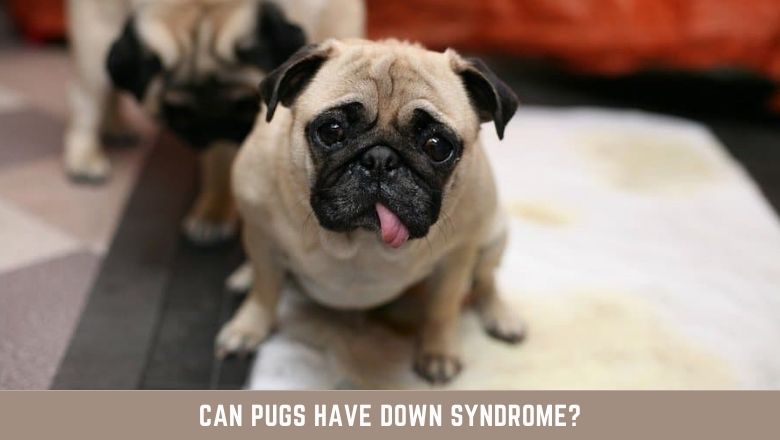 In this article, you will know the answer to the query “Can Pugs Have Down Syndrome?“.

There are many human diseases that dogs can contract, such as diabetes, hypertension, heart conditions, and even cancer.

Dogs have well-documented ailments, but many people wonder whether they may also be affected by other conditions, like Down syndrome.

Pugs, in particular, are the subject of a lot of discussions. Are pugs capable of having Down syndrome?

One might be tempted to say that pugs have some of the characteristics characteristic of the human form of the disease, given their short limbs and flat faces.

Despite this, there is no clear-cut answer to this question. For an understanding of why dogs have such a difficult time being diagnosed with Down Syndrome, let’s examine what this disease is and how it can be detected.

What is Down Syndrome?

What does Down Syndrome look like? How does it manifest?

The onset of Down Syndrome can be traced to the moment of conception. The nucleus of every cell in the human body contains 23 pairs of chromosomes. All the traits we inherit from our parents are determined by these chromosomes.

Both parents contribute 23 chromosomes during conception. Genetic make-up is determined by the pairing of these chromosomes. Mistakes occur when these chromosomes are paired incorrectly. Because of its connection to chromosome 21, Down Syndrome is also called trisomy 21.

A child with Down Syndrome receives an extra chromosome 21 from each parent instead of one.

How is Down Syndrome screened in humans?

Pregnant women are routinely tested for Down Syndrome by their doctors. It is possible to check for Down in the first trimester of pregnancy using blood tests, but they are not very reliable and produce a lot of false positives.

Doctors recommend amniocentesis in the second trimester to screen for Down syndrome and other birth defects. Women over the age of 35, who are more likely to give birth to a child with Down syndrome, are highly recommended to have these tests.

It is also possible to diagnose Down Syndrome at birth. A karyotype blood test is ordered if the doctor sees any tell-tale Down signs in the child so that the doctor can determine whether the child has an extra chromosome 21.

Rarely, the baby has a mix of normal cells, some of which have two chromosomes 21 and some with three.  In children with mosaic Down syndrome or Mosaicism, fewer Down symptoms will be present.

Can pregnant dogs be screened?

Doctors do not monitor the pregnancy of female dogs. Some dog owners may take their pets to the vet for ultrasounds to confirm pregnancy, but no other tests are performed, simply because they are not available.

There has been no study conducted to determine if dogs could suffer a mutation similar to trisomy 21 as they have 39 pairs of chromosomes in each cell. A dog can have a condition similar to Down Syndrome, but experts are not even aware of what to look for at chromosome level to diagnose it.

A number of companies offer genetic testing for dogs to screen for potential inherited diseases, but a test for a canine version of Down Syndrome does not exist.

Can pugs have Down Syndrome?

The pug breed is afflicted with a variety of genetic health issues.

What physical features do Pugs have that are like Down Syndrome?

It is true that pugs have many of the same symptoms as Down syndrome. We know they were bred to have a flat face, which is characteristic of all brachycephalic breeds.

Pet owners find it cute since it gives them a funny, almost human face. It can also cause breathing problems for them.

Additionally, pugs have short legs, which is a sign of Down syndrome in humans. As all pugs have the same appearance, this trait cannot be attributed to a disease that may affect some dogs of the breed.

Then again, there are many other dog breeds with short legs and no one mentions Down Syndrome in their case.

How intelligent are pugs?

Aside from physical characteristics, Down Syndrome is also associated with cognitive impairment.  Humans with this disease have a mild to moderate intellectual disability and IQ below average.

Can pugs be tamed? They’re not the smartest of dogs. Stanley Coren ranked pugs fifth out of six breeds in his Dog Intelligence List.

Some facts can’t be ignored despite the debate surrounding dog intelligence tests. Coren’s highly acclaimed study, for instance, found that a bright dog learns a new command after less than five repetitions.

Pugs take 40-80 repetitions to comprehend and learn a new command, so they are slow learners. Do they have Down syndrome? We don’t know. Even more slow are Chihuahuas, beagles, bulldogs, and mastiffs, according to the study.

A pug’s inability to learn might also be caused by low levels of oxygen to the brain, as they have breathing problems.

Are there any other dog breeds that might have Down Syndrome?

When dog owners notice their dogs act or look differently than other dogs, they usually suspect their dogs might have Down Syndrome. When a dog’s limbs are short or deformed, or if the face is flatter than what is normal for the breed.

In addition, puppies that appear to develop slower than others, both physically and intellectually, may have Down Syndrome.

Other symptoms of Down syndrome include unusual behaviors, whining, or excessive howling.

Breeds of dogs can exhibit such symptoms, and they are probably caused by their genetic make-up.

The cost of owning a Down Syndrome pug

Irrespective of whether their health problems are due to Down Syndrome, pugs are prone to many debilitating diseases which means more expensive vet bills.

As an example, consider a pug that suffers from PDE. He or she will need to visit the veterinarian frequently and take constant medication.

Down syndrome is often associated with heart defects in humans, and the same is true of pugs. Experts point out, however, that puppies born with severe congenital heart defects rarely live to adulthood. Those who suffer from it will obviously need medical supervision, medication, and a special diet.

It’s difficult for pet parents to see their dog suffering from a debilitating disease, which adds to the emotional toll.

The fact that pugs and any other dogs do not have any studies to prove a chromosomal abnormality like in humans makes it impossible to determine if they have Down Syndrome. Someday, it may be possible to diagnose such a condition, but for now, it is only known that pugs have many physical and intellectual traits that are quite similar to the classical Down signs seen in humans.

On the other hand, it should be noted that the prevalence of this syndrome among humans is roughly 1 to 800 live births, whereas it appears to be inherent to the breed in pugs.

Unlike humans, pugs are inbred deliberately to conserve desirable characteristics. Down syndrome is an accident, a fluke. There wasn’t an accident there, but rather irresponsible breeding.

Can Pugs Have Down Syndrome? (Watch Video)