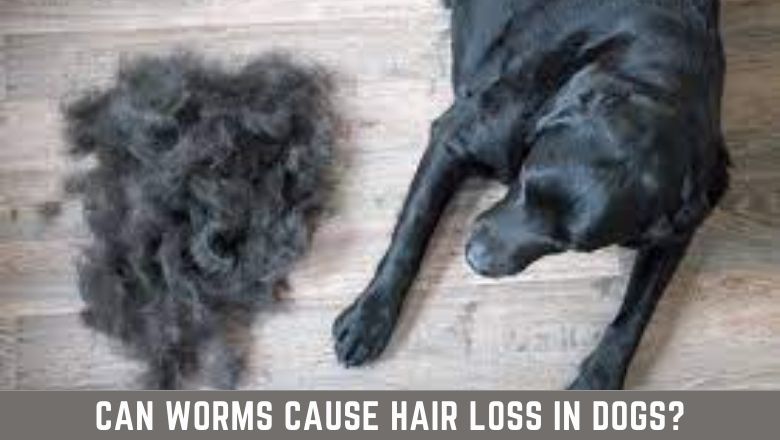 In this article, you will know the answer to the query “Can Worms Cause Hair Loss In Dogs?“.

Have you recently noticed that your dog is losing hair after having been treated for an infestation of worms?

Despite the fact that it is not impossible, it is highly unlikely that this hair loss is caused by worms.

Let me explain why.

Having worms in your dog should not cause hair loss by itself.

Worms can cause considerable distress to a dog and its owner, but they do not cause hair loss.

In any event, worms are commonly treated with a variety of medications, so I wondered whether any of them might have any known side effects, such as hair loss.

I just browsed a list of the most popular medications used to treat dogs for worms.

Here are their names:

In veterinary practice, all of these medications have been used successfully for years, and they are all considered to be safe.

However, all medications have the potential for side effects, so I dug deeper to learn about the side effects of each of these drugs.

The only medication known to cause hair loss in dogs out of all of them is fenbendazole.

The case of moxidectin is interesting. The known side effects of this medicine are panting and muscle tremors in dogs, but excessive grooming and scratching in cats.

What do we mean by worms?

Did you know that dogs are commonly infected with 6 different types of worms? I was unaware of such a wide variety of types myself…

Just thinking about these things makes me disgusted

Let’s go over some of the main points about these worms.

These worms can be passed from dogs to humans, so prevention is extremely important.

The dog’s intestine is home to all but two of these worms. Dogs can get heartworms, which live in their hearts, as well as lungworms, which breed in their lungs.

Among the most common worms are roundworms, which puppies inherit from their mother when they are born.

Due to the amount of blood they consume, hookworms can be fatal to puppies.

When they live in a dog’s heart, heartworms are by far the most dangerous type of worm.

Mosquitoes transmit these worms, and they are more prevalent along the Atlantic and Gulf coasts of the United States.

When examining worms in dogs, there are two difficulties.

The symptoms are not limited to worm infestations. They include weight loss, for instance. Your dog could be suffering from any number of diseases, not just worms if it’s losing weight.

Additionally, the best way to tell if your dog has worms is to see them in their feces, vomit, or on their bottom.

However, you won’t necessarily see worms on your dog if it has them.

It is unlikely you will be able to see any other type of worm in your dog’s stool since it can only be identified by examining a stool sample under a microscope.

Having said all that, here are the six most important signs that your dog has worms.

[1] According to what we have already said, this is your best symptom because a dog with worms will definitely have them.

The symptoms [2, 3], [4], and [5] are all physically obvious – you can tell when they are happening just by looking at them. The only thing you don’t know is whether they indicate worms collectively or individually.

[6] is a more difficult one to spot. It may be easy to recognize that your dog is in pain, but it is more difficult to confirm that the pain is coming from the abdomen.

How do dogs get worms?

Dogs can get worms in five different ways.

It’s time to get gross again.

As you can see, it has to do with the fact that a patch of ground that has been infected by worms or fleas (via stool, for example) can stay infected for months. Regardless of whether the dog walks on the soil and then ingests tiny particles as they clean themselves, they are at risk.

The grass is eaten by dogs. They might eat it if it has water on it and they are looking for a drink or even if they are trying to make themselves vomit or balance their diet by consuming plants.

My first impression of this was somewhat frightening, and I only realized it after doing some research.

Whenever a dog grooms itself, it might accidentally swallow a flea if they have fleas.

It almost seems like dogs chew their skin with their front teeth when they groom themselves, doesn’t it?

Suddenly, you realize, yeah, that’s not so crazy after all.

As a result, the dog is at risk of contracting worms if those fleas are infected with worms.

Therefore, flea treatment should be done on a regular basis

A type of worm that has been infected with wild animals (dead or alive). Rats, rabbits, and birds have been known to carry this worm.

What percentage of dogs are guilty of this?

Right now, my sister-in-law is struggling with something very similar.

The dog’s favorite pastime is to disappear into the hedgerows and come home with a dead rat or pheasant in its mouth. Yum!

Do you ever want to let your dog out again after reading that list?

It is all-encompassing and a little frightening.

Currently, it is unlikely that an infestation of worms is the cause of your dog’s hair loss.

What do you think it is?

These are the eight most common causes of dog hair loss

An infestation of parasites, such as mites, fleas, or lice

Anxiety or parasites due to overgrooming

There are three types of skin conditions: eczema, dandruff, and hot spots

Nutritional deficiencies are also a concern

Food allergies are among the top five

There are seven types of scars or wounds

The eighth condition is inherited

Here are some of the best and most common treatments

Infections and inflammations are treated with antibiotics, antifungals, and steroids

Allergic reactions can be treated with antihistamines

Medication for ticks and fleas

There are a few holistic solutions I can recommend for you to try if you want to go that route. You can use a humidifier, apple cider vinegar, or lemon juice.

Therefore, it appears that worms are unlikely to be the cause of your dog’s hair loss.

It is very unlikely that a medication used to treat your dogs for worms will cause hair loss, but it is possible.

I have discussed several of these factors in this article, but the most likely cause of your dog’s hair loss is not worms.

Can Worms Cause Hair Loss In Dogs? (Watch Video)