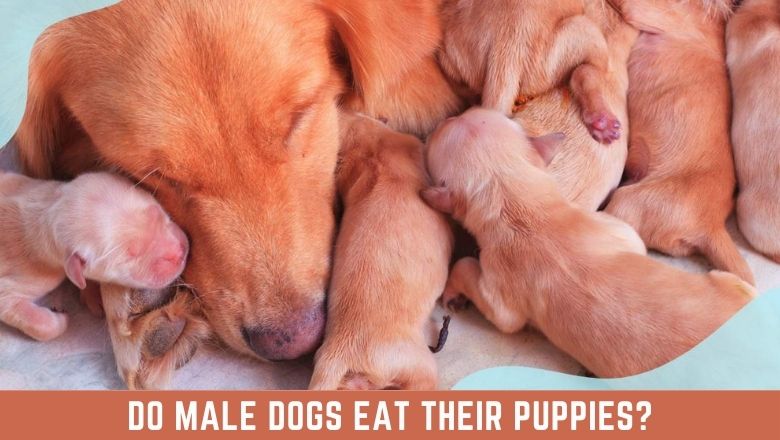 In this article, you will know the answer to the query “Do Male Dogs Eat Their Puppies?“.

When you’re a puppy owner eagerly awaiting the birth of a new litter, seeing your pet eat her own puppies is shocking.

Another nightmare scenario is when the father kills and eats some or all of the puppies.

Perhaps you have heard such horrible stories so you are concerned, but is this an everyday occurrence?

If you conduct a thorough search on this topic, you’ll find that such cases are rare, especially in cases of male dogs eating their own offspring. We’ll explore the roots of such behavior in this article for both male and female dogs.

Why do male dogs eat their puppies?

There’s one thing you need to know from the very beginning – if you ever see a puppy being killed, remember that it’s only going to be horrible to you.

They almost always do this for a reason, and it probably has to do with their instincts.

It is often the case that a male dog’s role ends after he has mated successfully. Chances are they won’t know that they sired any offspring if they don’t live under the same roof as the dam.

It is possible for a strong bond to form between two dogs who live under the same roof, whether they are at a breeder’s farm or in a house.

You shouldn’t expect the father to jump for joy when he sees the new puppies. There is a good chance a male dog will show some mild curiosity or he may ignore the puppies.

Sometimes, even if he’s normally a well-behaved dog, the proud father can behave aggressively towards his own offspring.

For a dog to behave in such a way, you must consider canine psychology and instincts dating back thousands of years.

The main reason a male dog might attack his own puppies is that he sees them as competition.

Alpha dogs may want to eliminate other males competing with them for the favors of their bitches. There are other species that exhibit similar behaviors, such as lions, apes, and even cute dolphins.

Do male dogs recognize their puppies?

A male dog will not quietly examine the new litter, thinking to himself: ‘Oh, this little fellow has my eyes, and the other one has my fur!”’

The scent of a puppy does not indicate it is his.

Their perception might be that they are strangers and potentially dangerous. Even if he were to recognize them as his own, a male dog would have no qualms about disposing of the new puppy because animals are not governed by our moral values.

In contrast, new males who take over a lion’s pride tend to eliminate any cubs born to other males.

Dolphins, generally regarded as very intelligent animals, have an interesting fact about animal behavior towards their young.

Studies show that bottlenose dolphins keep track of the females they’ve mated with and that their young are safe. The male dolphin, however, will kill the young if he encounters a new female accompanied by her young.

When the calf dies, the mother dolphin will go into heat faster, increasing the chances of the male dolphin mating again.

The same theory has been proposed for male dogs’ aggressive behavior towards their puppies, but it has been disproved by the fact that female dogs will go into estrus again six months after giving birth regardless of whether the puppies are alive or dead.

Should the male dog stay away from the puppies?

Puppies rarely need to bond with their father as they will most likely be sent to a new home and never see them again.

According to experts, it is best to keep the male dog away from the litter for at least the first 15 days of the puppies’ lives. In addition to the risk that the male dog is aggressive towards the pups, the older dog may also accidentally injure the puppies.

In playing with the little balls of fur, the dog might cause them to harm completely unintentionally.

Additionally, the mother may behave aggressively during the early stages of her pups’ lives when the father comes around, simply because she is trying to protect them.

A young mother is extremely protective of her puppies, even when the parents have lived together for a long time and generally have a good relationship.

The puppies could get injured if tensions between the parents escalate.

It is safer to introduce the male dog to the litter after the third week of gestation. If the puppies start exploring the world, a bit of socializing with their dad may help them learn a few things, but it is not absolutely necessary.

Dogs do not normally behave in this way. Although there are a few types of situations when a dam will consume some of her young, it is usually in the best interests of the whole litter.

We will examine the most common reasons for canine infanticide.

Whelping dogs should be left alone as they will know what to do, even if it’s their first time. Their instincts will guide them.

The human observer might be horrified to see the mother eating one or more of her puppies shortly after removing them from the water sac that protected them in the womb. Sometimes, there’s no time for the human to intervene, so they’ll never understand why she did what she did.

A stillborn puppy or a puppy suffering from health issues is more likely to occur in most cases. When the mother removes the puppies from the sack, she will lick them clean; this is when she might discover that the puppy is malformed or sick.

Newborns in the animal kingdom do not need to be rushed to the NICU. Vets might be able to save a sick puppy, but the dam doesn’t know that. There’s a risk that a sick puppy might infect the other puppies, so it needs to be sacrificed.

The mother protects the rest of her young by doing such an awful thing. Mothers sometimes push sick pups out of the whelping box when they see one is sick, leaving them to die on their own.

Furthermore, if you wake up and discover one of the pups is missing, it might have died from natural causes, such as the fading puppy syndrome, and the mother thought it was best to eat it.  Dams, on the other hand, may bury their sick or dead puppies.

In spite of having all the instincts they need to care for their young, a dam might accidentally bite one of the puppies when releasing them from the water sac or cutting their cords.

As the mother uses her teeth in both cases, it is possible to injure one of them, especially if it is her first pregnancy.

It is possible for a puppy to be bloodied by accident. Also, the mother might freak out seeing all the blood and eat the pup, thinking that it has little chance of surviving.

A female dog can develop mastitis in one or more of her teats. Mammary glands cause the teats to swell and turn red or purple if there is an infection present.

A frightened puppy is trying to suckle the poor dog who’s in unbearable pain. Owners should always try to inspect the dam’s teats from a safe distance so as to avoid such situations since this is a time when human interference is not recommended.

Whenever your dog is suckling, look for signs of discomfort, and if you think she might have mastitis, take her to the veterinarian. The puppies should be bottle-fed while she is recovering.

Even though it is rare nowadays, a female dog might resort to eating her young if they live in a hostile environment.

In order to be able to properly care for her puppies, a nursing mother needs quiet, a safe place, constant comfort temperatures, and lots of food.

It is sometimes possible for a dam to become stressed if the household becomes too large or too noisy. Perhaps she will decide that it’s better to kill them altogether if she feels those conditions aren’t adequate for the puppies to thrive.

When resources are scarce, animals do that in the wild.

Why waste food on puppies who might not survive to adulthood if there isn’t enough food to go around? It is better to keep the food for the adult dogs, so they can live and have another litter when conditions improve.

It might seem like a very selfish behavior, but it is actually essential to the species’ survival.

By the way, this type of reasoning may explain historical cases of cannibalism in human societies affected by famine, when the first victims were usually children.

Not recognizing her puppies

When touched by humans, usually clueless tourists, some animals in the wild refuse to care for their young as this changes their smell.

Dogs have an incredible sense of smell, and they will recognize the smell of any puppy in the household as well as that of humans, so there is little chance of them abandoning or attacking the pups.

There have been cases in which a dam has attacked her puppies after they had been docked. Perhaps the mother thinks that the puppy is sick, so it is best to put them out of their misery.

Despite being rare, cannibalism does happen in the canine world. Male dogs might kill and eat their own puppies if they perceive them as competition.

A male dog may also accidentally kill his young if he plays too rough with them, which is why he shouldn’t be allowed to be around the new litter for the first two weeks.

In contrast, when a female dog eats her young, she does it either to protect the rest of her litter or to protect herself, as when she develops mastitis and is beside herself with pain.  Always assume the dam had reason to destroy some of the puppies, instead of being horrified.