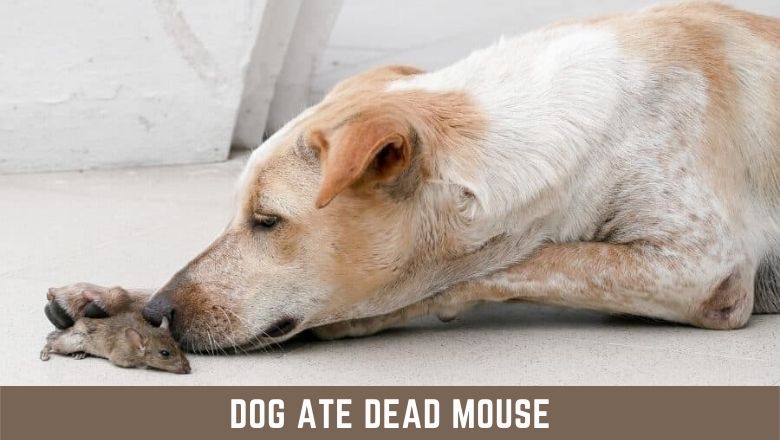 In this article, you will know the answer to the query “Dog Ate Dead Mouse“.

After your dog has eaten a dead mouse, try to get over the gross aspect as quickly as possible and focus on your pet’s safety.

The biggest concern should be whether or not the mouse was poisoned to death, since this is a medical emergency.

Let’s look at the most common poisoning symptoms, but if you or your neighbors use rat poison on your properties, going to the vet right away might be the best choice.

However, even if the mouse was not poisoned, it could still make your dog sick if it carried parasites or harmful bacteria.

It’s not a medical emergency, but you should see a veterinarian just to be on the safe side.

Try other means of getting rid of rodents if you have rodent problems in your area.

Why might a dead mouse be a threat to a dog?

It’s always possible that your dog will find a dead mouse on your routine evening walk, even if you’ve never had a problem with rodents or none are present on your property.

In most cases, he will want to examine the dead animal and see what it tastes like. Today’s household pets were once hunting dogs or at least retrievers of dead prey.

To them, putting a dead animal in their mouth is not revolting. A dog’s instinct is to sniff, and they don’t seem to find it revolting at all.

The first thing you need to consider is if that mouse was poisoned if your dog kills it.

You don’t know how much poison is in that mouse, so you can’t tell if it is enough to kill a dog.

Dogs can die from these poisons so you should not take any chances.

The disease is also a possibility.

Mice can carry a variety of bacteria and parasites, especially roundworms.

The dog might seem fine after eating the yummy dead mouse, but this can cause severe health problems.

A dead mouse that your dog finds is likely to be consumed by him before you have a chance to look at it.

Untrained eyes can also have difficulty determining whether a mouse was poisoned or died of other causes.

You can tell if there is a wound or puncture on the outside.

There’s a higher probability that the mouse was poisoned if there are none and the mouse appears intact.

Several types of rodenticides are anticoagulants, which kill by causing internal bleeding. You may be able to spot blood in the mouse’s mouth if you look closely.

What are common poisons (chemicals) used to kill mice?

Rodents are attracted to rodenticides that act as blood thinners, only in much higher dosages. A rodent ingesting this type of poison will die of internal bleeding. This is a painful and slow death that might take days to complete. As the mouse grows weaker and stumbles on its feet, it becomes an easier prey for predators, including your dog.

Actually, that’s vitamin D3, which your pediatrician might prescribe to your toddler. It contains a powerful rat and mouse poison at high doses. The poison damages the kidneys when ingested. In addition to being one of the most popular rodenticides on the market, it is also one of the most difficult to treat if your pet gets secondary poisoning from eating a dead mouse.

This type of poison kills a rodent by causing swelling in the brain. A large amount of bromethalin ingested by your dog can be lethal, with symptoms appearing within 2 to 24 hours after ingestion.

Zinc, calcium, and aluminum phosphides aren’t often used for mouse and rat extermination but can be used in certain rodenticides. The phosphorus releases a toxic gas into the stomach of the animal.

What are the symptoms of a dog that has eaten a mouse that has been poisoned?

Dogs that eat poisoned mice will exhibit different symptoms depending on what type of poison they consumed.

When poison contains anticoagulants, keep an eye out for signs of internal bleeding, such as:

A dog with this type of poisoning will need to be taken to the vet since it needs massive doses of vitamin K, as well as other treatments to support failing organs.

A dog poisoned with cholecalciferol will exhibit excessive thirst and frequent urination, followed by lethargy since the kidneys will shut down.

The symptoms of bromethalin-induced brain swelling include seizures, tremors, and loss of coordination.

Symptoms of phosphide poisoning include a bloated and tender abdomen, vomiting, and even shock.

Keeping in mind that the symptoms might not appear right away is the most important thing to remember. If your dog is pretty much his usual self by the next morning, don’t assume that he is fine.

If your pet has any poison in his system, the doctor will prescribe an antidote to take before any symptoms appear.

What diseases do live mice carry that might harm dogs?

You won’t have to worry about your dog eating a mouse that wasn’t poisoned but died from another cause.

Even so, the dead rodent could harbor harmful bacteria, such as clostridium botulinum, which causes botulism. Such cases are rare, however.

Leptospira, which causes leptospirosis, is another dangerous bacteria commonly found in rodents.

Vomiting, diarrhea, and lethargy are common symptoms of many diseases, so owners might not realize the extent of the issue until their dog develops kidney and liver failure.

It can be fatal if leptospirosis is left untreated.

Toxoplasmosis can be contracted by dogs that have eaten dead mice.

Toxoplasma gondii is a parasite that lives in mice and other rodents and causes this disease.

Vomiting and diarrhea are also symptoms of this disease, so the vet will need to run some tests in order to diagnose it.

The dead mouse may also cause your dog to contract roundworms.

The larvae of this parasite hatch in the mouse’s stomach then hide in its muscles and tissues until they can infect another host, such as your dog.

Roundworm infestations in dogs cause all the usual gastrointestinal symptoms as well as unexplained weight loss since they absorb all the nutrients in the dog’s belly.

Roundworm eggs can be found in the dog’s stool if the vet examines it.

Will washing a dog’s mouth out help?

Your first reaction when you see your dog eating a dead animal is to clean his mouth thoroughly.

Rub the inside of your pet’s mouth with a small cloth dipped in a solution made of water and baking soda or even simple salt.

The dog won’t benefit in any way if he just ate a poisoned mouse.

If you catch your dog eating a dead mouse, oral hygiene should be the last thing on your mind.

You shouldn’t waste time cleaning his mouth since the poison might already be in his stomach.

Make an appointment with the vet right now! You can also call the poison helpline!

Is there such a thing as a “dog-friendly” mouse poison?

Rodenticides that are dog-friendly do not exist.

To get rid of mice or rats, do not use toxic chemicals if you have pets.

The pet owner says their animal has never shown interest in the rat poison they’ve used in the past.

You should never assume your dog won’t touch something just because he hasn’t done it before.

There’s a first time for everything, but in this case, it might also be the last time.

How should a dog owner kill mice on their property?

It is safest to kill mice with traps, preferably live traps that do not kill the rodents.

Once you have caught a rodent inside one of these traps, you can release the unfortunate animal somewhere in the wild, at least a mile away from where you live.

You can also get rid of mice on your property with tiny electrical traps that are only large enough for a mouse to crawl into.

In the event that you do not wish to electrocute the mice, you can install ultrasonic emitters that scare the rodents away with their high-frequency sounds. These sounds cannot be heard by humans or dogs.

Make sure mice cannot enter again by sealing any holes they might use and, most importantly, don’t provide them with food.

Those who cannot eat your food will go somewhere else on their own.

Regardless of whether you want to get rid of mice or rats, you use the same type of poison. Rats are much bigger than mice, so it takes more poison to kill one than to kill a much smaller one.

When a dog eats a dead rat, he might ingest a greater amount of poison, so lethal secondary poisoning is more likely to occur.