In this article, I mentioned all the “7 Dog Breeds With Dots Over Eyes“.

Are you ever curious why there are some dogs with dots above eyes while others do not? Some breeds are more prone to displaying this genetic trait, but it can also skip a generation.

There must be a purpose to giving dogs a pair of dots over their eyes. Dogs have a lot of personality without them.

We’ll talk about why some breeds of dogs have spotted over their eyes, while others do not, and how these spots allow them to communicate with other dogs and their family members. In addition, we’ll examine specific breeds that are more likely to exhibit these characteristics.

Do Dogs Have Eyebrows? Dogs with Dot Eyebrows

There are very few dog breeds with eyebrow markings that are similar to ours, and the main reason is that dogs don’t need them. A human’s eyebrow serves a practical purpose: to prevent sweat from getting into the eyes. There are no sweat glands in dogs’ paws, so they do not sweat like humans.

However, eyebrows are also used to communicate feelings. It is the muscles beneath the eyebrows that move them, not the tiny patches of hairs that cover the eyes.

It is interesting to note that most animals lack such muscles (or eyebrows, for that matter). Dogs do.

The only muscle they have is short and strong, and it lets them raise an eyebrow if you will. There are two such muscles in humans.

A study in Australia found that highly social animals have muscles to move their eyebrows.

A distant relative of dogs, the wolf, has more facial expressions than a fox, which is solitary.

Why Do Dogs have Dots above their Eyes?

Black dog with brown spots above eyes breed are known as tan points. Black-and-tan breeds are most likely to exhibit this trait.

A gene called Agouti is responsible for the black and tan color. Agouti comes in multiple varieties called alleles.

Depending on which allele a dog inherits from his parents, his fur will be colored and marked differently.

If the genes he inherited from his parents are of the same type, the dog will have a distinctive black-and-tan color.

These tan points can be found above the eyes, on the sides of the muzzle, on the cheeks, on the chest, and sometimes even on the legs.

Occasionally, black spots may appear over the eyes of predominantly tan dogs.

What purpose do the spots over a dog’s eyes serve?

The role facial markings play is little studied, but it’s a well-known fact that dogs communicate primarily through their eyes.

When two dogs stare at each other, tension builds, whereas when one looks away, the tension is being diffused.

A third theory indicates that the tan points are used as decoys.

A dog’s tan points may appear as eyes when he sleeps with his eyes closed, at least from a distance, giving the impression that the dog is alert. Nevertheless, that would have been reasonable many years ago, before dogs were domesticated.

Today, dogs communicate with us more effectively by using their eyebrows. According to one study, when dogs are talking to their owner, they use more facial expressions than when their owner turns his back and isn’t looking at them.

This mock-eyebrow appears to have evolved as a way for dogs to communicate with humans more effectively.

Therefore, if you’d like a dog with whom you’ll be able to communicate better, you should select one with tan points over the eyes. Here are some breeds displaying this characteristic. 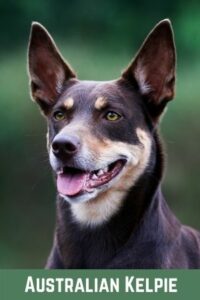 Why do kelpies have eyebrows? This breed of dog with dots over eyes belongs to the group of herding dogs. They have short weather-resistant coats due to the fact that they were originally bred in Australia, where temperatures are high most of the year.

There are four predominant colors for this breed: black, red, chocolate, and fawn. Generally, black Kelpies have tan spots over their eyes, whereas chocolate ones have lighter spots. Their coat does not require much grooming, but they shed a lot in spring, so it’s a good idea to brush them regularly.

A Kelpie weighs between 25 and 46 pounds and is a medium-sized dog. Their intelligence and ease of training make them excellent pets.

Additionally, they are quite energetic and require a lot of physical activity. Their human family is their first priority, but they aren’t as kid-friendly as we’d like them to be. 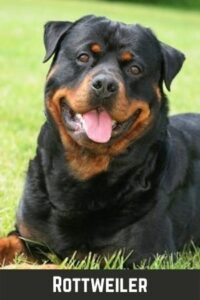 The big, broad-chested dog breeds with dots over eyes seem intimidating at first glance, but Rottweilers are affectionate and make great pets with proper early socialization.

Rottweilers weigh between 85 and 130 pounds and are strong working dogs. Their double coats are coarse and short. The rottweiler has stripes on its head and sometimes on the paws, right above the nails, in tan or rust colors.

You should brush their coat every week as they shed a lot. Drool is another thing they do.

Furthermore, they’re excellent bodyguards because they’re very protective of their families, and contrary to popular belief, they’re very good with children, especially if they grew up together. They are also quite intelligent, ranking ninth for both working and obedience intelligence. 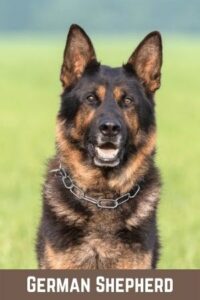 According to the American Kennel Club, German Shepherds rank second in terms of popularity.

Despite their seeming aloofness, they are loyal and will fiercely defend those they love.

When they aren’t properly trained, however, they tend to get a little overprotective, treating their family like the flock of sheep they used to herd back in the day.

There’s a good chance they’ll also have spotted over their eyes since German Shepherds are typically black dogs with cream, red, or tan markings.

A double coat of medium length covers them. Despite the slightly wavy outer coat, a quick scrubbing every week can keep it looking good and shiny. 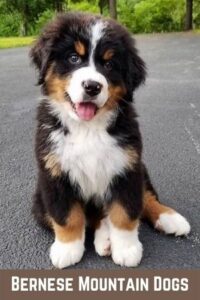 Bernese Mountain Dogs are dogs with dots above eyes and have slightly curly fur and tan points over the eyes that give them an inquisitive and sometimes very funny look.

On the outer coat, they have longish wavy hairs. This breed, also known as Berners, typically has a tricolored coat with predominantly black fur and white and tan markings.

The Bernese Mountain Dog is a friendly species that is extremely affectionate with both children and adults.

Dogs are wonderful pets, but it’s important to train them well when they’re puppies, otherwise, they can weigh up to 115 pounds as adults.

Berners tend to get bored when they don’t get enough exercise and will bark until they get your attention until they are entertained. 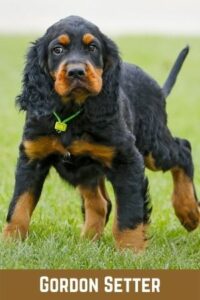 The best description of Gordon Setters is “brains, beauty, and birds sense”. Due to the fact that they were originally bred as hunting dogs, specifically to retrieve quail and pheasants, they have a good sense of bird sounds.

A simple glance at them is all you need to know about their beauty.

The best feature of these dogs is their long black wavy coat, which requires regular brushing to prevent tangles.

Long hair covers the ears, chest, belly, and legs, and tan spots appear over eyes or on the cheeks.

Let’s move on to the brains. A Gordon Setter is intelligent and intuitive, so it is easy to train them.

Since they bark quite often and also have a tendency to wander, you’ll want to train them well. Be sure that your yard has a high fence. 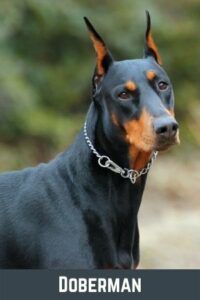 Most Dobermans have tan points and their coats can be black, fawn, fawn, red or blue. These are dogs with two dots above eyes.

Despite their short coats, you might think they don’t require much grooming. However, they shed heavily, so weekly brushing is required.

Dobermans have a reputation for being fierce, and as they grow quite large in adulthood, between 60 and 80 pounds, they require good training.

Your pets are more likely to behave like they’re in charge if you don’t make it clear from the start that you’re the alpha dog.

Not just physical exercise, but mental stimulation is also necessary for these dogs.

Dobermans can live in an apartment, but they’re much more comfortable in a home with a large garden where they can run around uninhibited. 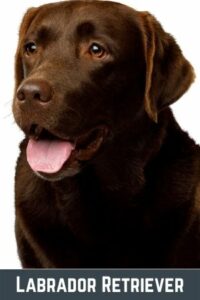 It was difficult but luckily found a photo of a Labrador with spots over its eyes!

Outside the double coat is smooth and straight, while the inside is soft and water-resistant. Labrador coats are close to the body so they need to be brushed daily to get rid of loose hairs.

A mature Labrador retriever weighs between 55 and 70 pounds. These dogs have a rather sweet disposition, making them an excellent family pet.

Nonetheless, they were bred as working dogs, so they are very energetic. Dogs like to play and they need physical exercise.

In the absence of entertainment, they might entertain themselves by playing with your slippers.

Labrador retrievers also need to be physically active since they tend to gain weight quickly if they spend too much time on the couch and only get up to eat. 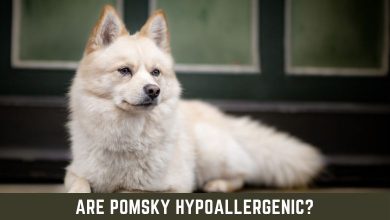 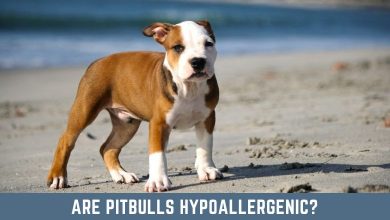 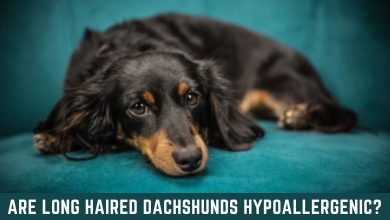 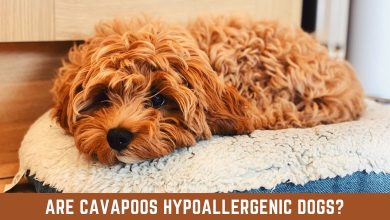 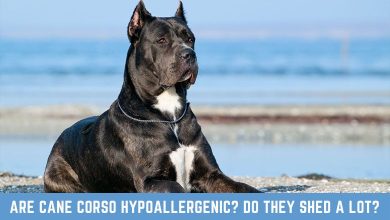 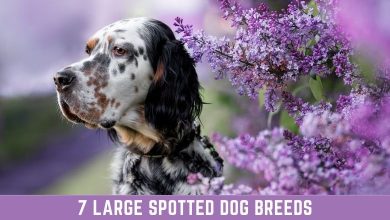 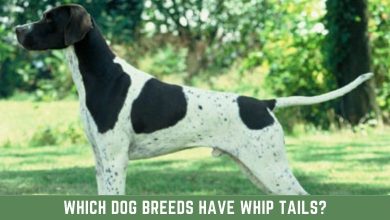 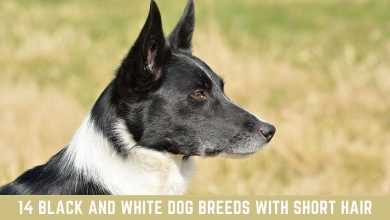 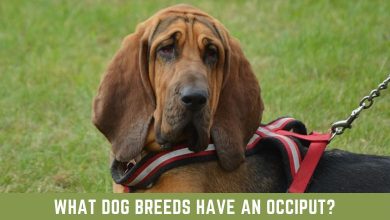 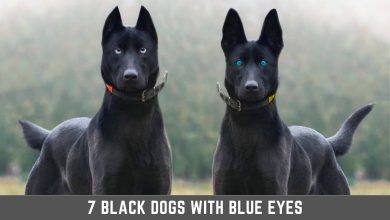