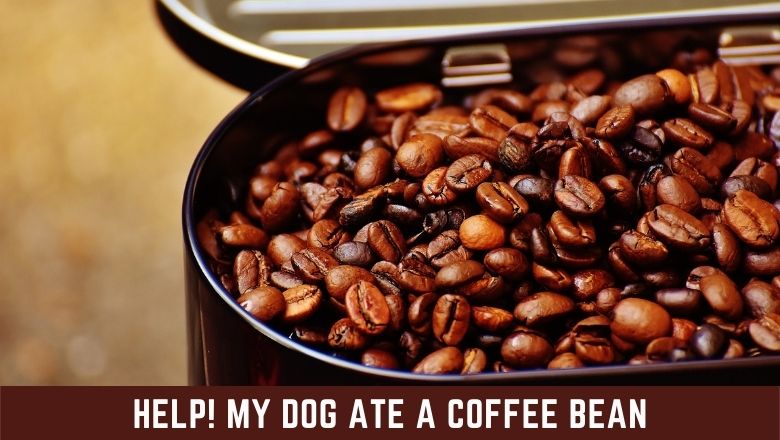 The purpose of this article is to explain “Help! My Dog Ate A Coffee Bean“.

Is your dog always following you around the kitchen?

No matter how much I don’t move, she’s there or thereabouts pretending not to look at me.

She knows, however, that sooner or later a scrap or morsel of food will fall to the ground.

When I take a loaf of bread out of its wrapper, or a few stray flakes of porridge oats when I carelessly pour them into a saucepan.

I cringe when I think about stray coffee beans from the bag as I pour them into the grinder.

I don’t bat an eyelid when it comes to bread and porridge oats.

However, what about the beans? Would my dog be harmed if it ate a bean?

Are our coffee beans toxic to dogs?

Dogs can be poisoned by coffee beans if they consume too many of them.

Coffee beans are a stimulant because they contain caffeine.

The good news is that if your dog eats only a few coffee beans, then they are unlikely to become ill.

I will later use my Golden Retriever as an example.

By using some online calculators, I believe she can eat over 200 coffee beans without harming herself.

What is caffeine and how does it affect a dog?

Because caffeine is legal and unregulated, it is the most widely consumed psychoactive drug in the world.

How much caffeine does it take to poison a dog?

The average amount of caffeine per kilogram in dogs that die from caffeine poisoning is between 100- 200 mg.

Therefore, your dog’s size and weight are very important factors.

In the case of a small dog eating the same amount of coffee beans as a large dog, the smaller dog would be at greater risk of poisoning.

It’s hard to grasp this, so I’m going to provide an example to help you.

Sylvie, one of my Golden Retrievers, weighs 30 kg.

According to my calculations, Sylvie can consume approximately 220 coffee beans before she needs emergency treatment at the vet.

How much caffeine is in a coffee bean?

It’s not an exact science to determine how much caffeine is in a coffee bean since there are two varieties of coffee beans- Arabica and Robusta.

As a result, it is a bit like trying to answer the question, “how much sugar is in a cookie?”.”””

It is known that an Arabica bean and a Robusta bean contain about the same amount of caffeine.

There is about 6 mg of caffeine in roasted Arabica beans, compared to about 10 mg in roasted Robusta beans.

What effect does the roast level have?

If you’re a coffee-lover, then you’ve probably heard that how much caffeine there is in a coffee bean or ground coffee depends on how it’s roasted.

It is traditional to have three levels of roasting: light, medium, and dark.

Dark beans have obviously been roasted for longer than light or medium roast beans.

It is widely believed in the coffee world that darker roasted beans contain more caffeine than lighter or medium roasted beans.

There is no truth to this.

Each coffee bean has approximately the same amount of caffeine regardless of how it is roasted.

Number of coffee beans vs weight of coffee

You will not notice any difference in roast level if you are only concerned with the number of coffee beans your dog ate.

A roast level can, however, make a big difference in another way.

Roast level matters if you are concerned about your dog eating a certain amount of coffee beans.

More caffeine means more beans in this regard.

What are the side effects of caffeine poisoning in a dog?

The toxicity calculator that I linked to a short while ago is very helpful because, depending on the number of coffee beans that your dog has consumed, it will indicate if “no treatment is necessary” or if “emergency treatment is needed”.

Some of you might want a bit more information, since some dogs may exhibit symptoms of a milder poisoning below those thresholds.

How do you tell if you have caffeine poisoning?

It is common knowledge that people who drink too much coffee are “wired.”.

A number of the same behaviors can be observed in dogs, including restlessness, hyperactivity, and extreme thirst.

Treatment of dog with caffeine poisoning

In the event that your dog displays any of the above symptoms, you need to call your vet and tell them what your dog ate and how they are behaving.

You shouldn’t be frantically searching the Internet for home remedies on this occasion.

Book an appointment with your veterinarian and let the professionals handle it.

You might be thinking now that caffeine poisoning is terrible and that things can’t possibly get worse.

The result is caffeine poisoning combined with chocolate poisoning.

What do you mean my dog steals my chocolate biscuits and eats my coffee beans?

Actually, that is possible, but I had another idea in mind.

Chocolate contains a chemical that is toxic to dogs.

It is called theobromine and is given the same toxicity level as caffeine.

While the level of caffeine is consistent across different coffee beans, the concentration of theobromine differs from type to type of chocolate.

Online searches show that chocolate-covered coffee beans can be covered in dark, milk, or white chocolate.

Coffee beans that are covered in chocolate are the most dangerous for your dog.

Ground beans vs instant coffee vs tea vs Red Bull

In this last section, I will compare different types of drinks that contain caffeine to determine which one contains the most caffeine.

It’s no secret that Red Bull contains caffeine, is it?

Although I would have preferred to compare it with the teaspoon, I couldn’t find enough detailed information.

Thus, I will compare how much caffeine is in a cup of ground coffee, instant coffee, a cup of tea, and a cup of Red Bull.

I meant something around 240 ml by a cup.

The clear winner here is ground coffee – if winning means having the highest caffeine content.

Besides the amount of caffeine in Red Bull, of course, these figures should just be regarded as rough guidelines.

Instant coffee brands differ quite a bit in the amount of coffee they contain.

Ground coffee has almost twice as much caffeine as a cup of tea, but the amount of caffeine can differ between the two.

The amount of caffeine in ground coffee varies depending on how finely it has been ground and how long the coffee grinds remain in contact with the water.

It is the same with tea- the longer the tea bag is left in the water, the more caffeine it contains.

Would you rather feed your dog instant coffee, ground coffee, tea leaves, or a can of Red Bull?

From this bad bunch, which is the best?

In an ideal world, you wouldn’t want him access to any of them, but if I had to choose, I’d go with your dog accidentally getting hold of a teabag.