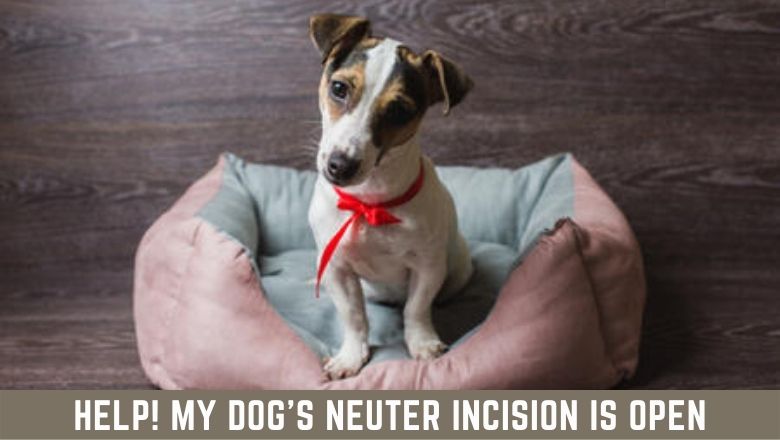 In this article, you will know the answer to the query “Help! My Dog’s Neuter Incision looks Open“.

It is natural to be worried after taking your pup home following neutering surgery.

He’s still dazed, and he’s giving you the stink eye because you took him to the vet, and, on top of that, the incision looks awful.

You think so, at least. Is there anything you can do? what to do if dogs neuter incision opens?

Understanding how long it takes for a wound to heal, what it should look like, what’s normal, etc., requires an intensive post-surgery care course.

All your questions are answered here.

As a reminder, if your incision is just slightly open and there is a clear or pink discharge, you should not be alarmed.

Read on while you relax!

How does a dog behave straight after surgery?

You can expect your dog to be disoriented after surgery and not his usual self.

Anesthesia can have long-lasting effects up to 24 hours, depending on what he received.

Nevertheless, there is also the psychological trauma he has endured.

Even though the dog doesn’t know he’s been castrated, going to the vet and being handled by strangers will make him confused.

In addition, he might be experiencing some discomfort as the anti-pain medication administered during the surgery wears off.

Don’t try to give your dog human painkillers since they may be dangerous for your pet. If your veterinarian prescribed you some medication, make sure you administer it as directed.

You should give your pet some water as soon as you arrive at home, but only a little, otherwise he might vomit.

Approximately half of what he normally eats should be offered after a few hours.

You need not be concerned if he doesn’t have much of an appetite, this is normal. Don’t worry about it.

The following day, he should be able to eat and drink normally.

How long should a neuter wound take to heal?

Your dog’s age and size determine the length of time it takes for a neuter wound to heal.

When neutered at a young age, around two months, puppies bounce back very quickly.

By the next day, they’ll be back to normal, and the wound will heal within a few days.

Due to the smaller size of a dog, there will be fewer wounds to heal.

It generally takes between 10 and 14 days for a neutering incision to fully heal.

Usually, vets postpone neutering surgery for large breed dogs until they are one year old because they mature later.

It will take longer for the incision to heal as a result of the larger incision.

After neutering, male dogs recover faster than female dogs. In spaying, internal organs are removed, including the uterus, so the wounds are difficult to heal.

When you get home, look at the incision wound closely. In general, if your vet was happy with how the wound looked when you were sent home, that’s how it will look when it’s healed.

As an example of a wound that is healing properly, here is what it should look like:

What are the signs that an incision isn’t healing properly?

Several times a day, check the wound after neutering surgery. Your veterinarian probably advised you to do this. Especially if it’s your first puppy, you may worry yourself sick if you don’t know what to expect. Despite this, complications with this type of surgery are rare, so there’s no need to worry.

The following signs indicate that the wound may be causing problems:

What should I do if the incision opens?

Incisions that swell a bit aren’t necessarily alarming. This can happen if the dog licks his wound too much or moves around too much.

It is normal for a little blood to leak from the wound but watch the dog closely to see if it stops. Let the dog rest if the bleeding stops and there is no further gaping. He can be checked out at the vet the next day.

You should take him to the vet if the gap gets bigger and blood continues to leak out. A brightly colored subcutaneous tissue or swelling of the incision indicates that something is obviously wrong. The dog should be taken to the ER if necessary.

How should I stop my dog from licking the wound?

With the anesthetic wearing off, the dog will be more inclined to lick the incision site as he feels pain and discomfort. Since he might open or become infected if he licks the wound, you have to keep him under close supervision at all times.

Until the dog’s wound has healed completely, the vet probably gave him an Elizabethan cone, aka the cone of shame. Dogs can be quite vocal about their displeasure, however, so this is easier said than done. The e-cone is for your dog’s benefit, so ignore his protests.

With that thing on, some pet owners worry that the dog won’t be able to eat. If you want to make eating easier for him, you can raise his bowl on a small crate or something of the sort if you want to wear a cone around his neck.

When you take his cone off while he eats or goes potty, keep him on a leash and keep him insight. The command to leave the wound should be given immediately if there is any attempt to lick at it.

What should I do if my dog can’t tolerate an e-collar?

Veterinarians often recommend Elizabethan collars for recovery dogs; however, pets hate it when a lampshade is put over their necks. Know that there are options if you cannot stand to see your pooch in distress. Unlike e-cones, inflatable collars are softer and do not restrict the dog’s peripheral vision like traditional collars.

Kong cushions, for example, are lightweight and comfortable to use. Furthermore, it’s sturdy enough that the dog won’t be able to destroy it unless of course, he is very determined.

Soft cones are quite similar to cones of shame, but they are made of soft plastic, rather than hard plastic. In addition to being soft and padded, the Comfy Cone allows the dog greater freedom of movement.

For dogs that are more mellow, these alternatives work well. Just so that he can lick that wound, a rambunctious dog will twist his body in ways that seem impossible.

Post-surgical dog suits are another great alternative that covers the wound area so the dog cannot lick it. There is no risk of the dog ripping the suit open since it is like a onesie with a cap on the back.

A repurposed T-shirt can be made if you are good at working with your hands. Your upper legs are already drilled, and you will need to make two additional holes for the lower legs. A safety pin or cap can be used to close the shirt. The problem with these shirts is that you can’t keep an eye on the incision wound to see how it’s healing.

Should I exercise with my dog?

Dogs that have undergone neutering don’t need to exercise after they have recovered. Instead, the dog should be given a lot of rest and a lot of rest to prevent the wound from opening up.

We recommend isolating the dog from other pets in the house, and not letting him play or jump. You should barricade staircases in your house so your pet does not go up and down them.

The dog may need to be created if necessary, but ensure that he’s comfortable. Make sure he has food, water, and toys he likes. Now would be the perfect time to give him a new toy, preferably a puzzle so he will be distracted from the irritating suture he can’t reach.

Also, don’t allow your dog to rub against rough surfaces as this could lead to the wound re-opening or getting infected.

Should I clean the wound and if so, how?

During the first week following neutering surgery, dogs shouldn’t be bathed. Additionally, you should make sure that the wound doesn’t get wet, such as if it rains.

It is not necessary to clean a wound that is healing properly. The wound can be cleaned with cotton balls or pads and plain warm water if it appears dirty despite your best efforts. Dislodging blood crust might trigger bleeding again, so do not try to dislodge it.

Don’t use hydrogen peroxide or alcohol on your incision. If you want a strong disinfectant that does not sting, use beta-dine instead.

Dabbing the antiseptic is better than rubbing it on the wound.

Make sure someone is going to watch over your dog 24/7, at least for the first few days, when you schedule his neutering surgery. Your dog may open the wound if he licks it. Don’t let him lick it.

The wound may appear to have a small gap, so don’t be alarmed. Monitor it carefully over the next few hours. In the absence of bleeding or puss, you can probably wait until the next day to see the vet if you’re still concerned.

Wounds that open up constantly, swell, and become bright red and hot should be considered alarming. See your veterinarian immediately.

You should rest a lot, avoid physical exertion, and give lots of love and affection to your dog after neutering.