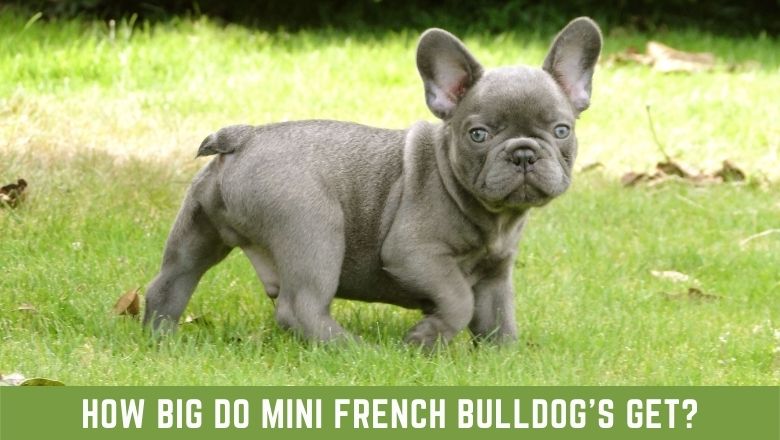 In this article, you will know the answer to the query “How Big Do Mini French Bulldog’s Get?“.

Are you considering adding a new puppy to your family? Then you really need to weigh your options. There are many different breeds of dogs available.

Nowadays, many people are interested in French bulldogs. Due to their small size, they are a perfect addition to a family living in a small space, such as a condo or apartment.

What is a teacup breed of dog?

I’m not joking when I say that a teacup dog is small and weighs no more than 5 lbs.

How does this compare to a standard-sized Frenchie?

A standard-sized French bulldog stands between 11 and 12 inches tall and weighs between 16 and 28 pounds. A male may weigh 20 to 28 pounds, while a female may weigh 16 to 24 pounds. As you can see, a teacup is much smaller than these figures. That’s why it’s called a teacup.

What are the advantages of teacup Frenchies?

There are advantages to having a teacup French Bulldog like most other min breeds of dogs.

Below is a list of my seven biggest advantages:

Whenever there is an upside, there is always a downside, and these are pretty significant.

Any disadvantage of owning a teacup French bulldog also applies to any other mini breed of dog.

There is no doubt that teacup dogs are tremendously expensive since they are purchased by people who are following trends.

There is a short period of time when these breeds are sought after by many people, which leads to a rise in price.

Later on, in this section, I discuss another negative aspect of trendy dog breeds

It is possible for any teacup breed of dog to suffer from any number of health issues.

They are also not minor health issues.

Health issues could jeopardize the dog’s life, or at the very least require an expensive vet visit.

Breeders have to use two very questionable practices in order to create a tiny dog.

Litter “runts” are used in the first one.

You have probably heard the expression “runt of the litter”, which refers to the smallest and weakest member of a litter.

Although these puppies are the least likely to survive, they are the best candidates for breeding teacup dogs.

But how could they possibly result in a litter of healthy and flourishing mini French Bulldogs?

Another questionable practice is tampering with the dog’s genes to get the smallest dog.

In particular, the gene responsible for creating dwarf dogs. It is called achondroplasia in medical terms.

However, some breeders will introduce this gene instead of seeking to get rid of it, and this can have very serious health consequences, such as poorly formed limbs and too many teeth in an underdeveloped jaw.

Due to their small size, these dogs are much more fragile and prone to injury.  Because they get under people’s feet, they are more likely to be trodden on, and this can lead to broken bones.

They are also more likely to sustain injuries when jumping from greater heights.

The great advantage of owning such a dog is the ability to take it anywhere, so imagine how hard it is for the dog on those rare occasions when you must leave them at home.

It is highly likely that they will be incredibly anxious and distressed because they aren’t used to being separated from you or being alone.

As we have already discussed, teacup breeds aren’t the healthiest of canine specimens.

There is a good chance that you would spend more time at the vet than if you bought a normal-sized dog.

In addition to this, a dog that is so small makes it much more difficult for the vet to treat them simply due to their size.

This will result in two more treatment sessions, which will increase the costs.

In addition, because they are harder to treat, their chances of dying from treatment are also much higher than those of a regular-sized dog.

In other words, the demand for a certain breed of the dog increases massively for a short time ( which can be measured in months) and then people don’t want them anymore because there is a far cuter breed of a small dog.

As a result, animal rescue centers across America and the UK are swamped as hundreds or thousands of yesterday’s trend teacup breeds are abandoned by their owners.

This is the last disadvantage of owning a teacup-sized breed, and it deserves its own section. It concerns unethical breeders.

As the demand for certain breeds of these tiny dogs can suddenly increase, breeders enter the marketplace to meet this demand.

This breeder’s top concern is not the health of the dog, but how much money he can make.

Dangerous consequences result from this.  To begin with, the dogs’ health and welfare are at stake.

The stories of cruelty and pain of dogs are behind every dog breed that is currently incredibly popular.

As a result of the rush to meet the demand and make as much money as possible, thousands of dogs will have died or been mistreated.

Second, there is a danger to the customers.

A beautiful dog could be yours if you choose to purchase it.

The only thing they wanted was your money.

Forgery of paperwork and lying to you also fall under this category.

You will probably end up having to spend an awful lot of money on a dog that will not live very long if you buy from the wrong breeder.

How to protect yourself against an unethical breeder

The American Kennel Club (AKC), which is meant to be at the forefront of dog welfare in America, does not recognize teacup breeds.

As a result, your job becomes more difficult

There is only one way to accomplish this, and that is to conduct a lot of research.

Make sure that if you absolutely must own a teacup breed of dog, you spend the time to find someone who is very experienced within this field.

You can’t use a single trick or strategy to ensure that the breed you are buying is of top quality.

By following the advice below, you can minimize the risk to a great extent.

Learn about breeds of dogs that you are interested in buying on the internet.

Make sure these forums and groups are still active by looking through them.

Do some research and use the search facility to check if anyone has already asked a question about teacup breeds.

In that case, start your own discussion and ask if anyone knows of any reputable teacup breeders.

Do some research on the person who is making the suggestion and doesn’t accept any answers at face value.

A beautifully designed website is not what you are looking for.

A site that looks as if the owner knows what he or she is talking about is what you want.

Seek out a variety of pages that provide you with information about the breed of the dog and look at the photographs.

Do you feel that the information has been written by an expert and do the photographs look legitimate?

It never occurred to you that there were other breeds of mini dogs?

Here is a list of some of the most popular.

Why are teacup breeds so popular?

There are two words to describe Paris Hilton.

Even though breeders have been creating teacup versions of many dog breeds for a long time, many people believe the trend for teacup dogs exploded in 2015 when Paris Hilton bought a Pomeranian.

The teacup is a smaller version of the traditional French bulldog. They have been crossbred with other breeds to become as small as possible. Celebrity owners have made this breed very popular.

The breed is the sixth most popular in the United States alone. Apart from their size, miniature French bulldogs are preferred by many dog lovers because of their cute appearance. They also have good personalities, which is why they are highly recommended for families with children. Furthermore, they are easily adapted to a new environment.

A teacup Frenchie can be made using three methods. One method involves breeding with a smaller dog (different breed lines). Another way is to introduce dwarfism to the dog, and a third way is to keep breeding it with a small dog within its same family or group.

Because teacup French bulldogs have been bred using different types of dogs to attain a small size, they are likely to have health problems. You really need to be careful with the kind of food that you feed them since they are prone to allergies.

Additionally, teacups could have digestive problems, respiratory problems, seizures, as well as blindness. These types of teacups could have a number of illnesses as well. As a result, you should monitor their behavior. Have your pet examined by a veterinarian as soon as you notice something unusual?

Teacup French Bulldogs are prone to a lot of diseases, but if you take good care of it with the help of a veterinarian, you can still have a healthy pup. You should feed it nutritious food and handle it carefully. Owners are responsible for knowing what they can and cannot do with their dogs.

Are these health issues the same as for standard-sized Frenchies?

Generally, French bulldogs are susceptible to many diseases. Even though they might share the same illnesses, a teacup is much more fragile than a standard-sized Frenchie because of its size. Therefore, it is more prone to getting sick. Another big reason for this is how the puppy was bred. These things should not deter you, however, from getting a teacup Frenchie for a pet. You shouldn’t have any problem becoming a parent as long as you do your part.

What other mini French bulldog mixes are there?

A French bulldog and a Poodle

French Boodle is the name of this mix. Poodles have longer noses and tails, so they may have better vertebrae and skulls.

“Fengler” is the name of this mixture. Considering a beagle’s healthier body, this could be an excellent alternative. However, the results are not as small as those of other mixes.

What different breeds are there that are of similar size and temperament?

Many breeds are quite similar in size and temperament to a teacup French bulldog. Among them are:

As an alternative to a teacup dog, a Cairn Terrier is an excellent choice. In addition and can be trained easily. rained.

It’s fun to have a toy dog like this. I love how friendly and joyful it is. In addition, its size makes it a perfect choice for an apartment.

Poodles are available in miniature sizes, just like teacups. Their intelligence and cuteness make them even more appealing.

It is one of many people’s favorite dogs because it is so cute and playful.

What would the price of a teacup puppy be in US dollars?

A teacup puppy can cost anywhere between 500 and 3000 US dollars or even more. One may be found under $500 if you’re lucky, but this is very unusual.

It is because of the task involved in breeding a teacup French bulldog that they are so expensive. The challenge of finding the right teacup size and health can be quite challenging. Choosing a good breeder is essential in order to get good results.

Depending on the breed, color, and other factors, the cost may also vary.

Lots are available for rescue?

Checking out some rescue organizations would be a wise move if you really want a teacup French bulldog, but you don’t have the money for one.

Certainly, there are lots of teacups that can be adopted, but finding a mini French Bulldog will take more effort and luck.

How Big Do Mini French Bulldogs Get? (Watch Video)