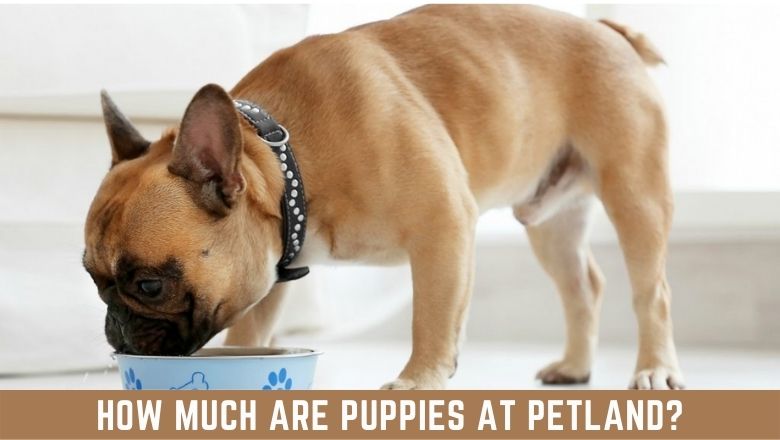 In this article, you will know the answer to the query “How Much Are Puppies At Petland?“.

The canine pet that families all over the world have grown up with, dogs have become ubiquitous in homes everywhere, and demand for them just keeps going up and up.

You may be wondering where the best place to get a puppy is if you’re in the same boat and considering getting your very own puppy.

It’s possible that you’ve heard of pet store Petland before, but how much are dogs at petland?

What breeds do they offer, how much do they sell puppies for, and where do they get their puppies from?

Find out the answers to each of these questions and more by reading on.

Over the last four decades, Petland has been providing high-quality animal products, training services, and pet products to customers in over 40 countries.

As well as pet care systems and services for the community, they try to place homeless pets with loving families through their programs.

They’ve also worked hard to reduce pet overpopulation in the communities where they operate.

Their website has a handy store locator tool so you can find a store near you. Petland has locations all across the US and Canada.

What Sorts of Puppy Breeds Do They Sell at Petland?

Petland offers a wide variety of dog breeds, so you’re likely to find a dog that fits your needs.

A list of their breeds is on their website, so it’s quick and easy to find out what’s available and what kind you may be interested in.

Petland lists the following breeds as being available:

Additional breeds are available on top of that exhaustive list, as well as many mini variants of larger breeds.

How Much are Petland Puppies? How much do Puppies Cost at Petland?

If you’re interested in buying a puppy from Petland, you likely want to know how much it costs.

Puppy prices can vary widely depending on the breed, but you can expect to pay anywhere from $2,500 to $9,000.

You may want to look into terrier varieties, beagles, or chihuahuas if you’re on the lookout for a puppy at the lower end of the price range.

Consider the Eskimos or the doodles if you don’t mind spending a little more.

Those of you who are familiar with Petland may be aware of the puppy mill scandal surrounding their name.

Until recently, it was assumed that Petland sourced its puppies from puppy mills, which are generally thought to be harmful and unhealthy for puppies.

The company has since told reporters and investigators that they only purchase their puppies from USDA-licensed breeders, and do not deal with puppy mills.

Humane Society investigators concluded, despite Petland’s claims to the contrary, that the company still sources puppies from puppy mills.

Petland sources their puppies from controversial puppy mills, even though many pet stores have transferred to more humane methods of purchasing puppies.

Are Puppies from Puppy Mills Healthy?

The issue has been hotly debated between pet stores like Petland and human societies and animal rights activists.

According to Petland, their puppies tend to be healthy in the vast majority of cases, even when they come from puppy mills.

Several puppies that are sold at Petland (and other big pet stores) come from puppy mills and have infections, diseases, or other health issues.

A few weeks after purchasing puppies with such a health complication, Petland refused to compensate buyers.

Since the people running puppy mills only want to sell as many puppies as possible, health and cleanliness are not a priority.

Puppies that come from puppy mills live in a filthy, disease-ridden environment.

It is common for puppies that come from such an environment to be unhealthy.

What Does Petland Do with Puppies that Don’t Sell?

If puppies aren’t sold fast enough, many pet retailers, including Petland, mark them down.

They will grow larger and require more food to stay healthy the longer they are not sold.

Consequently, the store will continue to mark down the price of the puppy until it reaches the price they paid the puppy mill or broker for it.

Should the puppy still not sell after all this, the store will cut its losses and donate the puppy to its employees, a rescue group, or a shelter.

What Are Some Other National Pet Store Chains in the US?

In addition to Petland, Petsmart and PETCO are the largest pet retailers in the United States.

Since 1986, Petsmart has grown to include hundreds of locations throughout the United States and boasts incredibly high revenues, too.

It’s a no-brainer to spend your money there since many of their yearly profits are donated to animal aid societies.

PETCO, the other major pet retailer, was founded in 1965.

PETCO donates much of its profits to pet aid causes to help improve the lives of pets nationwide.

Do These Stores Sell Puppies? Why Not?

Petco and Petsmart, among other major pet retailers, do not sell puppies.

They have recognized the harmful effects of puppy mills and the perpetuation of puppy breeding at facilities such as those.

They instead provide helpful puppy adoption services to help customers find the right dog for their lifestyle without the harmful effects of buying puppies from puppy mills.

Where is the Best Place to Buy a Puppy From?

It can be challenging to find a place that offers ethical and diverse options if you’re currently looking for a puppy.

USDA-licensed puppy breeders are the best places to buy puppies.

Such licenses prove that breeders are ethical in their breeding practices and provide puppies with a healthy and clean environment.

Many of these breeders charge high prices for their high-quality puppies, so if you’re working with a tight budget, you might want to consider other options.

Adopting from animal shelters or pet adoption agencies is also an option.

By adopting a dog, you can ease the burden on local animal services that keep strays off the street.

Every year, many dogs in such shelters are euthanized because of lack of space, so if you’re looking for a dog and would like an ethical option that would reduce puppy overpopulation, you should consider adoption.

Pros and Cons of Adopting from an Animal Rescue Center

When you adopt a dog from a shelter, there are naturally going to be some pros and cons.

Fortunately, the pros outweigh the cons for many.

In the first place, adopting a puppy instead of buying one helps save one of the millions of dogs that are euthanized every year in shelters.

As a bonus, you’ll be paying a lot less for your new canine companion, which can be very helpful if you’re on a tight budget.

In addition, you can feel good about helping to relieve the strain placed on animal shelters due to overpopulation. That sounds like a great deal, doesn’t it?

There are, of course, some cons to consider as well.

As a start, you’ll have to settle for whatever breed of dog the shelter currently has available.

To complete the adoption process, you may also need to fill out a lot of paperwork.

Plus, the dog you adopt may have serious behavioral issues or even emotional trauma that you must deal with.

In America, it seems that nearly every family wants its own dog, sometimes more than one.

Consider the information we discussed above when choosing where to get your puppy.

How would you like to impact the pet industry?

It is up to you to make the decision, but hopefully, we were able to help you make the right one.

How Much Are Puppies At Petland? (Watch Video)