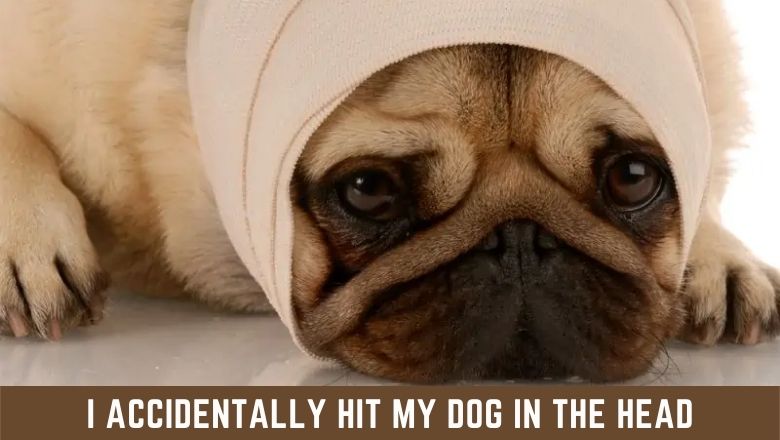 In this article, you will know the answer to the query “I Accidentally Hit My Dog in the Head“.

It is inevitable that accidents will happen. It is one of them when you hit your dog on the head. Most of the time, they’re fine, but sometimes they’re not. But how do you know the difference?

What causes this to happen? Particularly if you are a sensitive soul who views her pups as her children, you might be more concerned with their feelings after the fact.

What can we do to restore peace and regain their trust? Will they actually be distrustful as a result of such an incident?

How Does This Happen?

Take a look at your garage. Moving heavy furniture and other junk is heavy work, and the old furniture you’re moving is heavy as well.

Over the sound of your own labored breathing, you can’t see past the old armchair you’re trying to squeeze through the door, nor can you hear much else. This thing weighs more than Santa’s sleigh, let’s be honest. After that, you hear a dull thud, an anxious yelp, and see your dog running away.

The thing hit him! Oh man, that was a bad one. You chase after him, trying to calm him, and realize he’s bumped. What a poor pup!

A dog is like a small child, always curious and quick to get in the way when you’re doing something dangerous.

You may also have trouble disciplining your pup. Those problems are also common. You know, the type that doesn’t respond well to stern words or rewards.

It seems that these ones need a gentle flick on the nose. Occasionally, during intense moments, we get this the wrong way around and give them a whack on the head instead, and those can be a bit harder than intended.

There are times when it happens, but it isn’t recommended. We sometimes lose our cool when disciplining kids, shouting instead of talking. No matter what species your kids are in, parenting is stressful.

A whack (on the bum or elsewhere) is generally not a good way to train a dog since they aren’t necessarily capable of understanding what is happening.

Reward-based training is more likely to raise a pup that responds well to instructions and isn’t scared.

How do I Know If He’s Okay?

After a bump on the head, dogs are usually fine, but sometimes they aren’t. Is there a way to tell when they are fine?

A pup knows his owner, first and foremost. There’s probably something wrong with him, and you should have him checked out.

Symptoms of a head injury include uneven pupils, blood around the eyes and nose, and a wobbly walk.

These symptoms could indicate anything from a mild injury to a severe concussion and are causes for concern. Take your dog to the vet right away if you notice any of these symptoms.

In addition, if your dog seems disoriented or has blood in his ears, you should pay close attention to him.

Additionally, he might seem very confused, have some facial weakness, or even pass out. When a dog is suffering from a head injury, it may appear lethargic or paralyzed. The signs above indicate that a trip to the vet is essential and urgent.

Unless your dog shows any of these signs, he is probably fine. It wouldn’t hurt to take him for a check-up, though, if you’re still concerned.

Head injuries come in a variety of types, each with different severity.

Concussions are caused by hard blows to the head, which cause trauma to the brain. Depending on the circumstances and the location of impact, your pup may sustain temporary or permanent damage.

An impact on the head causes a contusion, which we recognize by bleeding on the brain.

There is a type of brain damage caused by severe shaking or rotation called diffuse axonal damage. In this case, nerve tissues tear, and various brain regions could be damaged.

What Are The Risks?

As dogs have thicker skulls than humans, they are more resilient than we are. Then again, a knock to the head, if it is hard enough, could cause some serious damage.

The effects of brain damage are pretty severe as you can see from the previous section. Death is by far the most severe risk of head injury. Your dog could die if he gets a hard enough knock aimed at the right spot on his skull. This is a scary thought.

It is possible for pups to suffer swelling in the brain when they are hit in the head. The result is insane pressure inside their skull, which can lead to seizures or comas.

To top it off, they’ll be suffering from an insane headache. They should be fine, however, if they get treated quickly. Therefore, it is imperative to get your pup to a veterinarian as soon as possible.

Are Puppies More At Risk?

The skulls of puppies are softer and have open fontanels than those of grown dogs. Is that so? When a puppy is born, his skull consists of several fragments that are loosely attached to one another. It is because of this that he can fit through the birth canal.

At around four months of age, these fragments, or fontanels, have grown together, and the gaps between them are closed.

Due to open fontanels, the brain’s soft tissues are only covered by a thin layer of skin and are not protected by the skull. Because of this, puppies are at greater risk of getting head injuries.

Older dogs are also more at risk than young ones, since they are less likely to survive the shock, simply because their bodies are less resilient as they grow older.

How Would the Vet Treat My Dog?

There is also a possibility that he could be in shock, which could be equally dangerous. If this is the case, keep him calm and warm. It’s up to you to determine the best way to do that for your pup.

Certain dogs might respond well to being wrapped in a warm blanket, while others may feel smothered by it and freak out even more.

You might not reach the vet in time for your pup to pass out. Gently pull his tongue forward and open his mouth if this happens. As a result, he will be able to breathe and avoid suffocation.

He may experience cardiac arrest in severe cases, in which case he will need immediate CPR.

When your dog is in shock, look for bluish gums, low temperature, irregular heartbeats, and slowed mental activity.

A vet might administer anti-inflammatory or rehydration medication via a drip once your pup arrives at the clinic. That way, the pup will not become dehydrated and the swelling will be reduced.

They will also be able to reduce the pain they are likely experiencing. X-rays and other scans may be recommended in severe cases to detect injuries not visible from the outside.

How Do I Rebuild the Relationship?

Your pup might have some serious trust issues after the blow to the head, whether or not it was intentional. My friend’s cat would not come near the dog because it bit his tail while she was holding him.

She bit the poor thing, he thought. The animal learns to associate my friend with pain through Pavlovian conditioning (where an event is associated with a specific outcome).

In this case, the dog will learn to avoid the thing he associates with pain or other negative things. Fortunately, dogs are quite good at reading intent and will usually understand that you did not intend to hurt them. Saying sorry, giving them a hug, and moving on is all you can do when this happens.

Your dog might need some retraining if he associates the situation with something unpleasant, as is the case with Pavlovian conditioning. If you have questions about this, consult a professional.

Occasionally, however, the bumps are quite hard, and he may be seriously injured. Take your dog to the vet if he shows any signs of head trauma.

It is vital to treat head trauma as soon as possible because it can be fatal.

If you accidentally hit your pup in the head, he won’t likely hold a grudge against you. Intent can be read by dogs pretty well, and they are quick to move on.

Therefore, if you bumped your dog and he seems fine, say sorry, give him some cuddles, and move on. He is likely to respond in the same way.

I Accidentally Hit My Dog in the Head (Watch Video)