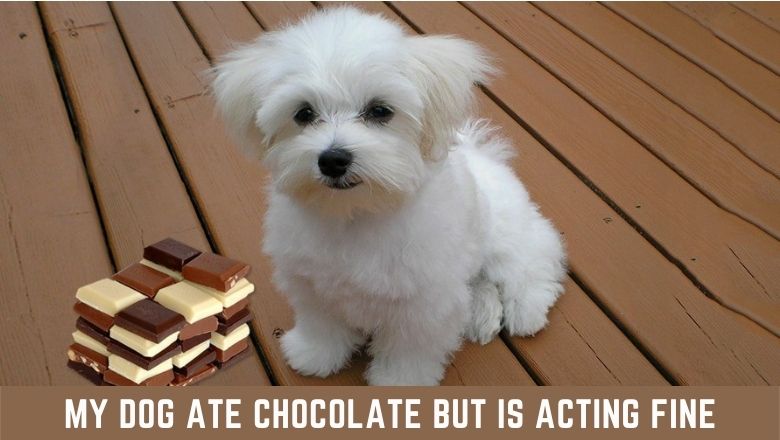 In this article, you will know the answer to the query “My Dog Ate Chocolate But Is Acting Fine“.

America consumes 2.8 billion pounds of chocolate annually, so you can be sure that almost every household has some kind of chocolate or candy.

If you are a responsible pet parent, you already know that you should never give your dog chocolate, even a little bit. You will first wonder if you should be concerned if your dog accidentally stumbled upon your chocolate stash and helped themselves to a generous amount.

However, you notice that they are acting fine; there are no signs of toxicity or stomach upset. Aren’t they supposed to be sick? In this article, we answer these questions.

Why is chocolate so dangerous?

Why am I unable to give my dog chocolate when he has a sweet tooth? How can dogs consume chocolate without being poisoned?

Theobromine and caffeine are stimulants with diuretic properties. Medically, these compounds are used as heart stimulants, smooth muscle relaxants, and dilation agents.

The dog’s body is not able to efficiently metabolize these substances, so it’s highly sensitive to the effects of these chemicals, especially theobromine.

Theobromine metabolizes much slower in dogs than caffeine, so it stays in their bodies longer, which contributes to the symptoms of chocolate toxicity.

Is eating a cube of chocolate as dangerous as eating half a bar?

The level of chocolate toxicity depends on the type of chocolate, the amount consumed, and the size of the dog. Therefore, eating a small piece of chocolate may not be as harmful as eating a half bar.

First, different types of chocolate are toxic to varying degrees. Darker chocolate is generally more toxic. A dog is more dangerous if it consumes more than the recommended dose. Another factor to consider is the dog’s size. A medium or large dog will be fine if it eats a small cube of white or milk chocolate. A small lap dog, however, may show signs of an upset stomach if they consume the same amount of chocolate.

Why does the size of the dog matter?

Chocolate poisoning is more likely to affect small dogs because theobromine toxicity is dose-related. Dogs can tolerate very small amounts of theobromine, despite not being able to properly metabolize it. It is toxic in doses greater than 20 mg/kg. A 50-pound dog eating 2 ounces of milk chocolate will be fine, but a 10-pound dog eating the same amount will experience symptoms like vomiting and diarrhea.

A 95-pound dog eating only 2 ounces of baker’s chocolate will experience symptoms such as vomiting and diarrhea.

The good news is that chocolate toxicity can be treated, and symptoms usually appear within 4 to 12 hours after eating chocolate.

Even though dogs can tolerate small amounts of theobromine, it’s not advisable to give them even the smallest amount of chocolate. Research studies have shown that continuous exposure to theobromine can lead to cardiomyopathy, a condition that affects the heart muscles and makes them incapable of pumping blood efficiently.

Why is dark chocolate more dangerous than milk chocolate?

There is 135 mg of theobromine in one ounce of dark semi-sweet chocolate, which can cause severe toxicity. Both Baker’s chocolate and dry cocoa powder contain high levels of theobromine (more than 400 mg per ounce), which is extremely toxic to dogs and can be fatal.

Is there any way of calculating if I need to take them to the vet?

When you discover that your dog ate some chocolate, you should determine what kind and how much they consumed. Based on the type of chocolate and the amount consumed (plus your dog’s size), you can calculate an estimated amount of theobromine ingested, which will give you an idea of what you can expect.

It is unlikely that theobromine will cause any lasting harm, so you don’t have to worry. Then you have to monitor them very closely for any signs of stomach upset or discomfort if they consumed enough to cause a negative effect.

When your dog has eaten a significant amount of chocolate and is showing signs of toxicity, you should take him to the vet as soon as possible. An online chocolate toxicity calculator, such as this one, can be used to determine how much theobromine your dog ingested, and what symptoms to expect.

White chocolate is the most dog-friendly chocolate

In contrast to other forms of chocolate, white chocolate will require very large amounts to cause toxicity in dogs. Nevertheless, white chocolate is not suitable for dogs to consume because it contains other ingredients that may pose health risks.

The ingredients in white chocolate include sugar, milk, cocoa butter, butterfat, etc. All of these ingredients are unhealthy for dogs. They may cause stomach upset and symptoms like vomiting and diarrhea. In dogs with sensitive stomachs, these symptoms can be very serious. Similarly, if your dog is prone to pancreatitis, the fats in white chocolate may trigger a painful episode.

Why else are sweets dangerous for dogs?

It is best to keep sugar (especially refined sugar) away from your dog if it has a sweet tooth. Although dogs are man’s best friend, they differ in many ways from us.

Sugar is necessary for them in the form of carbohydrates, but they shouldn’t eat granulated sugar or any foods that contain this type of sugar in large quantities. The presence of excessive sugar in a dog’s diet increases the risk of tooth decay, oral infections, obesity, diabetes, arthritis, etc.

Another form of ‘sweet’ that should be kept away from dogs is xylitol, which is a sugar alcohol. There is sugar alcohol called xylitol that occurs naturally in some fruits and vegetables. Many products contain it, including toothpaste, mouthwash, chewing gums, sugar-free candy, peanut butter, fruit drinks, etc.

Xylitol is completely harmless for humans, but extremely toxic to dogs, even in very small amounts. By consuming xylitol or products containing sugar alcohol, dogs can suffer hypoglycemia (low blood sugar). Hypoglycemia is caused by low doses of xylitol, while liver failure is caused by higher doses.

My dog ate chocolate but is acting fine

As responsible pet parents, we know the dangers that chocolate poses to dogs since we’re told how damaging these delicious treats can be. However, some dogs don’t behave well when they eat chocolate.

My Dog Ate Chocolate But Is Acting Fine (Watch Video)