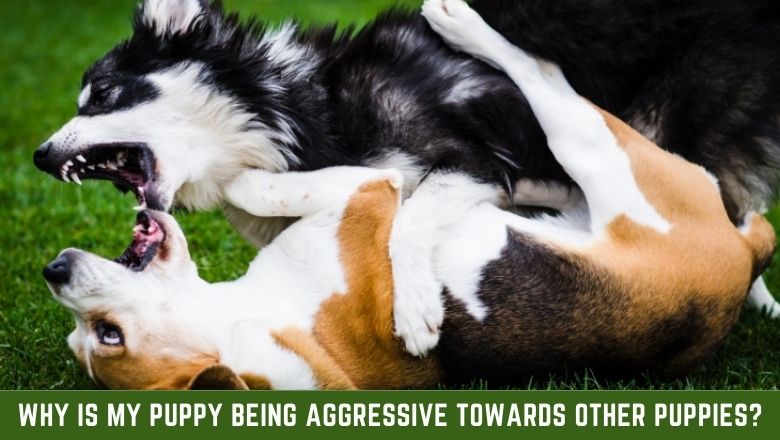 In this article, you will know the answer to the query “Why is my puppy being aggressive towards other puppies?“.

Puppy lovers are among us, so let’s focus on them, okay? There’s nothing cuter than a puppy, except maybe a kitten. A puppy is a wonderful thing, as there’s this cute little animal who needs to be cuddled, pampered, and talked to in the silliest voice you can imagine.

Pet owners are often surprised when their furry little buddy starts snarling and snapping for no apparent reason. How did it become this vicious little creature that loved to have its tummy scratched, and how do you deal with it?

Why are puppies aggressive?

There is a big problem with puppy aggression in relation to other dogs, young or old, and this can have serious consequences later on. The first thing you need to understand is that there is always a reason for this unexpected behavior, even if you cannot see it.

Animals, including dogs, have a natural tendency to protect their resources. Puppies can become aggressive towards other small dogs in the house, including siblings.

Perhaps you never noticed – one puppy cut in front of his brother to get to the food, whether it was their mother’s teat or the doggy food bowl.

I bet you laughed if you did see such an event. But your pups won’t go hungry because you know there’s plenty of food available. You’re right, but your dog doesn’t know this, and having to wait for food can make him anxious.

Suppose I don’t get any food? In all species, including us, humans, there is a survival instinct. In the puppy’s aggressive behavior towards his siblings, he is telling them – Hey, buster, get away from my food! You can also experience this when you have two unrelated puppies at the same time.

Unfortunately, this type of aggression is easy to deal with, and you can expect your puppy to outgrow it. In such instances, you can intervene by putting down another food bowl and letting the angry little fellow eat his fill. If you repeat this several times, the puppy will understand that there’s enough food to go around and there’s no need for him to snap at his siblings.

If you divide your attention between your puppies, you can easily resolve this type of sibling rivalry. If you have a smaller dog that needs more attention, make sure to give the little rebel some toys.

Growing and snapping at other dogs are often assumed to indicate aggression by nature or a bid for dominance, but this is not always true. Some dogs are genetically prone to aggression, but vets point out that aggression does not have a breed preference. No matter what breed, you will find aggressive puppies, just as you will find a gentle dog of a breed known for being vicious.

Aggressive dogs from a young age are anything but dominant. In most cases, they are simply scared. Once again, the owner may be blissfully unaware of what caused the puppy to feel fearful. It is possible the little puppy might get scared if another dog comes running to him when you take it for a walk. A puppy with no social experience won’t know what the big scary animal wants, even if the other dog doesn’t mean any harm. In a potentially dangerous situation, a puppy on a leash cannot run away, so he will become aggressive.

A puppy that shows aggression toward unknown dogs probably needs more socialization. Just as children play together on the playground, dogs learn how to behave with each other. Rarely meeting other children can make a child feel awkward in social situations; if he isn’t used to sharing toys, he will naturally resist another kid’s attempt to take away his yellow plastic car. You can teach a child how to behave on the playground with a little time and patience. The same is true for puppies who are scared. You will have to supervise these doggy play dates to make sure your dog doesn’t meet a violent dog, something that could reinforce his fears.

Walking your puppy around the neighborhood is also a great way to teach him more about the world. Let him get used to all the smell signals other dogs leave around trees and lampposts, and let him meet and hopefully greet other dogs. Avoid punishing or scolding your puppy if he begins growling when an unfamiliar dog approaches. It’s not that he’s doing wrong, it’s that he’s afraid, so you should try to calm him down and let him know he’s not at risk.

Stop by your neighbors’ houses if they have small peaceful dogs so that your puppy can see that other dogs are not inherently dangerous. Playing with your neighbor’s dog will establish a friendly relationship between your dog and his. By doing so, your puppy will be less likely to be aggressive when he meets other dogs.

Tip: There may be a puppy kindergarten in your area, which is a great way to socialize your pet within a controlled environment.

You may notice that your dog is aggressive only towards young animals, but not towards older or bigger dogs. Having his own fears may explain why your otherwise cute little dog is acting like a schoolyard bully snapping at other puppies. It’s common for bullies to behave violently because they themselves were bullied. The puppy will try to make other puppies fear you if he has reasons to be afraid of larger dogs. Meanwhile, he will know to stay away from larger dogs and leave them alone.

If the senior pet in the house has naturally established himself as the dominant dog in your household, then your dog might be aggressive to his siblings but behave himself toward the younger dogs.

In order to achieve peace and quiet at home, you should reinforce this belief by showing more consideration to your new puppy by feeding him first. It’s important for a puppy to understand his place in a pack since this is how things tend to work in the wild. This is a behavior that you need to correct if he tries to establish dominance over his siblings.

Often a puppy will growl when playing with other pets in the house or with members of his family. Watching a puppy growl to protect his favorite toy is usually very entertaining, but this is a situation that can quickly spiral out of control. If your child keeps teasing the puppy just so it makes that funny noise, play aggression could turn into predatory aggression, and aside from snarling the puppy might bite as well. Young dogs are still learning how to control their bite force, so this can be a serious issue. In an instant, seemingly innocent playful nips can turn into serious bites that pierce the skin.

A puppy must be taught from a very young age that aggressive behavior will not be tolerated. Simply walk away from the puppy when he misbehaves and doesn’t play with him. After a couple of repetitions, you’ll quickly have the message across to your dog. You are the only one who can teach your pet!

The behavior of a puppy that exhibits aggressive behavior should not be dismissed as natural. Don’t tell yourself that dogs behave this way. You should do everything you can to reassure the puppy that he does not need to be violent towards other puppies or humans despite the fact that he might be genetically inclined to behave that way. Find a good trainer to help you correct your pet’s behavior if you are unable to discipline your pet on your own.

Why is my puppy being aggressive towards other puppies? (Watch Video)