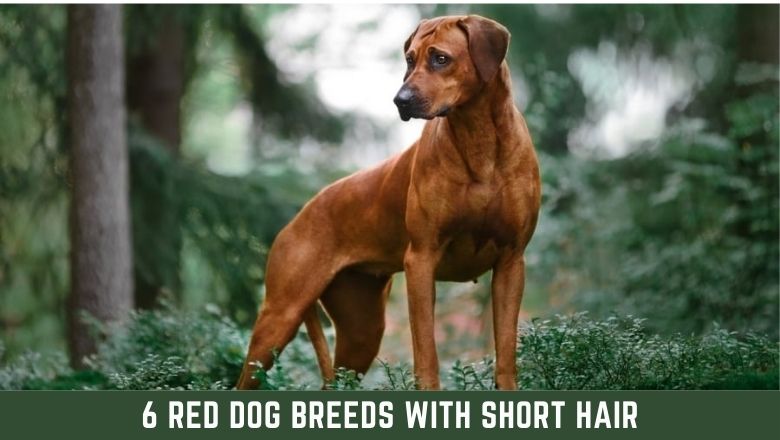 In this article, you will know the answer to the query “6 Red Dog Breeds With Short Hair“.

I have compiled a list of some of the breeds famous for their short red hair in my article, which is nothing more than that.

As I look at my list, I see that all the breeds in it are pretty large.

The smallest are Pharaoh Hounds, which stand 63 cm tall and weigh 27 kg, and the biggest is Dogue de Bordeaux, which weighs 50 kg or more and stands 69 cm tall.

Short-haired dogs are easier to clean when they get dirty because you won’t have to run your vacuum cleaner constantly.

Additionally, short hair is better news for those with allergies since there will be less “dander”.

However, many of these breeds are not for first-time dog owners- they will require some experience in addition to the patience all dog owners need.

Also, as larger dogs, they consume more calories and will therefore cost more to feed. Most of the breeds on the list also require lots of exercises.

Prepare yourself to get moving.

And speaking of that, let me introduce you to my first red dog breed with short hair…

My word for describing a Red Coonhound is “sleek”.

This dog’s athletic abilities and power are not hidden under a bushel.

When you look at it, you immediately know the type of dog you are dealing with.

It has a very short coat, deep red in color, and that is why the AKC describes it as “finest mahogany”.

Breeding these dogs was like breeding a modern-day multi-tool.

Tree climbing animals can be chased and forced up trees, or larger animals like mountain lions can be attacked.

Even their webbed feet make them effective in the water as well as on land.

Additionally, they are wonderful family dogs, as if they weren’t talented enough.

Exercise is necessary for them.

This breed is most easily distinguished by the ridge of hair growing in the opposite direction of the rest of its hair.

From African wild dogs, it resembles a spine

Ridgeback coats range in color from a golden yellow (or light wheaten) to red wheaten.

In the development of the Rhodesian Ridgeback, Great Danes were used.

It was bred in Southern Africa (yes, I know the name hints at what it is) to hunt down and corner lions until a hunter could catch up and shoot them.

It was used to clear pigs and baboons from the farm.

Rhodesian Ridgebacks are known for their great speed, strength, and endurance.

Family dogs tend to be great if you’re careful with young children who may be accidentally knocked over.

They are very tolerant, except when they are with a group of male dogs, which might trigger an Alpha Male need in them.

It’s time to go for a breed that exudes grace, rather than power and muscle like the previous two breeds.

Azawakhs originate in Africa, as do Ridgebacks.

In West Africa, it is the Azawakh valley.

Although it stands up to 74 centimeters or 29 inches taller than the Ridgeback, it is half as heavy.

At 55 pounds or 25 kilograms, an Azawakh will probably top the scales.

They are built for speed, as can be seen from their appearance.

They do not do well in wet or cold conditions because their hair is short and their body fat is low.

Originally bred to hunt small game animals in the desert, they were also used as guard dogs, protecting settlements.

Despite their aloofness towards very young children, they become very close with older children as they grow older.

Although they do not require a lot of exercises, they must have the opportunity to stretch their legs on a regular basis.

Ensure that they do not catch sight of anything that they might chase.

There is a legend that Pharaoh Hounds were similar to dogs shown in tomb paintings in Ancient Egypt.

It turns out, however, that this breed doesn’t have such a long and colorful history.

They are probably descended from Maltese dogs that were bred to hunt rabbits in the hilly and harsh terrains of some of the islands. Their very large and erect ears distinguish them from other dogs besides their dazzling red coats, which can range from tan to golden red.

Aren’t those ears giving them a king-like appearance?

Compared to the Azawakh, they are not as tall, with an adult male standing 63 cm tall and they are larger and heavier, weighing up to 60 lbs or 27 kg.

In addition to their gentle and patient nature, these dogs also have a highly desirable quality of being children-friendly. As long as they have run around a bit, they are happy to be couch potatoes.

You need to make sure that the area is enclosed if you take the leadoff.

Pharaohs will take off in a flash when they see something worth chasing.

As with the Vizsla, this dog has a long and ancient history.

Not an African company, but a Hungarian one.

Having been pictured with Hungarian warriors in the tenth century, they were later owned by Hungarian nobility.

After World War One, the breed nearly died out, but a group of enthusiasts revived it.

Look-wise, the Vizsla can be confused with other breeds including the Redbone Coonhound and Rhodesian Ridgeback.

Vizslas are smaller and not so heavyset in reality.

Several shades of golden rust are described as their coat.

Their red noses should always be red, but the Redbone Coonhound should not have a red nose

Vizslas are trained as “pointing” dogs and stand 23 inches or 57 cm tall, weighing up to 50 pounds or 22.6 kilograms on average.

A massive, red-coated dog is my last breed!

The dog’s huge head dominates its appearance-it’s circumference should be the same as its height.

If you stop staring at its head, your eye will naturally be drawn to its amazing coat, which ranges from a dark to a light fawn color.

It is quite surprising how soft their coat is.

It is to be expected that a big dog like this can be very stubborn and ignore commands if given the chance.

When traveling short distances, they can move like “billy-hoo,” but they generally enjoy a much slower pace of life.

They are affectionate and drool a lot, but there is no aggression!