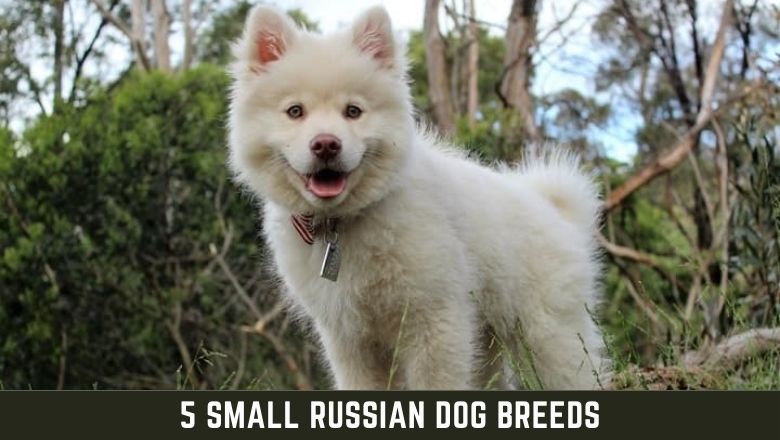 In this article, you will know the answer to the query “5 Small Russian Dog Breeds“.

The Russian Federation is such a large country that it spans over eleven time zones. This country covers more than 6.5 million square miles, making it the largest in the world.

I will talk about five small breeds of dog from Russia in today’s post, however.

Bolonkas are also loyal, curious, and easy to train, though more playful than Shih Tzus and requiring more social interaction. A Bolonka barks very rarely, while a Shih Tzu is louder, so the Russian small breed is perfect for living with nearby neighbors.

Russian Bolonkas are an ideal pet if you’re looking for a small dog breed that enjoys being cuddled, basks in your attention, and isn’t high-maintenance. Bolonkas have beautiful, curly hair, but don’t shed too much, and won’t leave clumps of hair all over your house.

In addition to black, gray, wolf, brown, and red, the Bolonka has beautiful wavy curls. A typical adult weighs between 8 and 11 pounds and stands between 8 and 10 inches tall.

Boychik, also known as the Russian Toy, is a very small breed of dog that originated in Imperial Russia and was closely associated with the Russian aristocracy. They are adorable with their goofy smiles and compact build, and due to their strong loyalty and innate friendliness, they are sure to win over anyone’s heart.

These dogs are a great balance of playfulness and calm – they’ll be happy to run and play, but they’ll also be content to relax with you when you’re enjoying a cup of coffee.

Their traits are similar to the Bolonka in that they thrive on human attention and are particularly fond of their family, though they can act aloof towards strangers. Russian Toys are not aggressive like other similar toy breeds and will prefer to ignore or not interact with unfamiliar pets or people.

Both long and short hair varieties of the Russian Toy are available. The breed is permitted to display the following colors: solid red, black and white, brown and black, blue and white, sable, and brown sable.

You should not let them weigh more than 6 pounds, and they should be between 7.5 and 10.5 inches tall. A rare breed, the Russian Toy is also highly prized, as are many other breeds on this list.

Russian Spaniels are a small and relatively unknown breed of spaniel that is incredibly friendly and gentle. Like a cross between English Cocker Spaniels and other spaniel breeds, Russian Spaniels share many of their characteristics with their cousins, except for the long ears, the short fur, and the longer and sleeker bodies.

As long as they get daily exercise, this small breed of dog can adapt easily to apartment living as long as they are bred for hunting and retrieving. Since they love making their owners happy, they are easy to train since they have a people-pleasing personality.

Russian Spaniels have a sweet and friendly disposition combined with their active nature, making them ideal for children. They can keep up with rough play while remaining gentle and non-aggressive.

They also make excellent guard dogs, as they will bark if they see any strangers approaching, despite their tender personalities.

As medium-sized dogs, Russian Spaniels weigh between 28 and 35 pounds, making them slightly smaller than Cocker Spaniels.

Breeds of the breed are permitted to reach a height of between 15 and 18 inches. In general, the Russian Spaniel’s coat is usually white with dark markings on the ears and head, ranging from black, red, brown, and tri-colored.

Samoyeds, the ever-increasingly popular sled dogs, are fast becoming known around the world as smiling sled dogs. Samoyeds are beautiful and graceful, but also extremely intelligent and sturdy, making them a welcome addition to most dog owners’ homes.

Samoyeds have an admirable combination of characteristics. Since he was bred to pull sleds, herd sheep, navigate mountains, and hunt, he has become a true working companion for humans. As a result, he is incredibly intelligent, highly trainable, and courageous.

A working dog breed with a strong personality, the Samoyed is known for being very friendly and affectionate, making him a good choice for families with children. The Samoyed’s white, fluffy coat also adds to its allure, but bear in mind that such glorious hair will require a lot of brushing.

Samoyeds weigh between 45 and 65 pounds on average (the females weigh slightly less and are smaller than the males). They are about 19 to 24 inches tall on average. Among the accepted coat colors for the Samoyed are white, cream, and biscuit. You’ll definitely need to groom and brush the hair of this breed on a regular basis.

Samoyeds appear in two other lists in case you would like to see other similar breeds:

A Karlo is a medium-sized, very handsome dog with a very thick, attractive coat of red hair and a fox-like head. Carlos is not as good as family dogs as the other breeds listed here, but they are equally affectionate and loyal to their owners.

Even though they are people pleasers and will respond well to praise and affection, they can be unfriendly and distrustful toward people they don’t know.

Karlos are hunters by nature, so it is best to socialize them at an early age to curb their innate aggression. A dog of this breed should not live with smaller pets such as toy dogs and cats since they will chase them whenever they get the chance just for the sake of it.

Although the Karelo is the most aggressive of the five breeds here, it retains its playful personality, curiosity, and sweetness even in maturity, making it just as fun-loving and lovable as the rest.

The Karlo is a relatively low-maintenance pet and will not require as much hair care as a Samoyed, although he will still need at least bi-weekly brushing due to his thick coat. A 16- to the 18-inch child will weigh between 25 and 30 pounds.

A solid red coat is permitted, with black, white, and fawn markings on occasion.