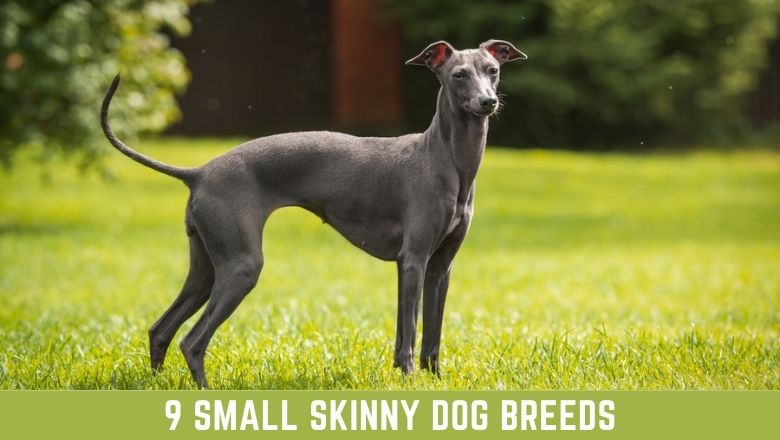 In this article, you will know the answer to the query “9 Small Skinny Dog Breeds“.

There are nine breeds of small, skinny dogs in this collection.

People with little living space should consider getting a smaller dog.

As all of these breeds are mostly short-haired, they take up little space, as well as not create a lot of mess.

You will find everything from the introverted and quiet Italian Greyhound to the Miniature Pinscher who wants to be in the spotlight all the time.

There are a variety of options available for you to choose from.

Small dogs don’t require a lot of exercises, so if you want one, you should keep that in mind.

There will be a daily walk or two required for all of these dogs.

In addition, slim dogs don’t stay that way by magic.

Aside from exercising these dogs, you will also need to ensure that they are being fed enough food.

Want to learn more? I’ll show you my first breed…

The Italian Greyhound is a slender, small, elegant, and skinny dog, like the Greyhound, but smaller. A mix of smaller Greyhounds bred in Italy, they share most of the characteristics of their larger cousin, but with a toy-companion build.

A hound with a shoulder height of 13 to 15 inches and a weight of 7 to 15 pounds has the sleek lines and curves that most hounds have, hinting that they love running and hunting. In addition to their narrow muzzle heads and somewhat delicate ears, this breed has an almost aristocratic appearance.

They are affectionate, attentive, and naturally charming, and love to cuddle and get hugs.

It’s impossible to miss the Chinese Crested Dog. Small and playful, this breed has a distinctive crest-like hairstyle that makes it unique and easy to recognize.

According to most people, the Chinese Crested is a modern dog breed that was bred from large hairless dogs brought to China from Africa hundreds of years ago.

Despite its tiny size, the Toy Manchester Terrier displays athleticism despite its sleek and graceful appearance. This breed was developed from the Manchester Terrier, which has the elegance of a hound and the energy and intelligence of a terrier, making it unique among toy dogs.

In terms of height and weight, the TMT is in the toy dog category, standing 10 to 12 inches tall and weighing under 12 pounds. TMTs are true terriers, however, and love displaying their athletic abilities.

They appear similar to a small Doberman because of their tight coat and tan spots above their eyes, but this small dog has its own unique personality – loyal, affectionate, and alert.

In a small body, the Mini Pinscher possesses a lot of personalities. As many people call them, “king of toys,” they are confident, fearless, and energetic. This much-loved breed exudes confidence and pride in its stance.

A MINI PINSCHER is an easily recognizable dog breed with its large puppy dog eyes, high set ears, and 10 to 12.5-inch height. It’s true that they look a bit like Doberman Pinschers, but this toy dog breed is actually much older than that, having been originally bred for hunting small vermin-like rats in Germany.

Although not a toy dog, the incredibly rare Peruvian Inca Orchid is still a small plant nonetheless. However, don’t be fooled by its appearance – it is highly intelligent, agile, and fast. They are excellent hunters as they are true sighthounds, with wits and energy to match.

PIOs measure 9.75 to 15.75 inches and weigh 8.5 to 17.5 pounds. They come in small, medium, and large sizes and are all accepted as breed standards. A variety of coat types exist, including short and smooth, long and curly, and long and straight. With its slender muzzle, sleek lines, and distinctive erect ears, the PIO is both elegant and slim.

The handsome Podengo dog is the smallest of the three charming breeds, hence its name, Pequeno, which means small. The other two are Medio and Grande. With its almond-shaped eyes, erect ears, and dense or long, wiry coat, this small dog breed has the looks to match its lively, friendly, and playful personality.

Approximately eight to twelve inches tall, the Pequeno weighs nine to thirteen pounds. Pequenos is an ancient dog breed that was originally bred for hunting, hunting both small prey and game, and protecting against rodents.

Rat Terriers have a smooth patched coat that gives them an adorable yet elegant compact appearance. They have a playful and happy personalities along with their energetic and smart natures. Playful, dignified, and charming, this small dog breed can be the life of the party.

Rat Terriers, weighing 10 to 25 pounds, stand between 10 and 13 inches tall at the shoulder (compared to up to 18 inches for the regular). By breeding it to its small size, American settlers were able to use it to control pets and hunt small game while retaining its energy and affectionate personality.

With its slim build, lean muscles, and long legs, the Russian Toy is the quintessential toy dog. Semi-long coats or smooth coats are available for this breed. The smooth variety has a sleek, shiny, elegant appearance while the semi-long variety has a nice feathered look on the tail and legs.

In early 20th century Russia, the Russian Toy was bred from the English Toy Terrier and was a symbol of aristocracy. It was kept as pets by the Russian upper classes.

There’s no denying that the Russian Toy is a compact, portable breed, standing between 8 and 11 inches tall and weighing as much as 6.5 pounds. Even though it’s large, it’s lively and friendly, but can sometimes be distant from strangers.

This intelligent, alert, and agile dog does very well at agility shows and competitions. A toy terrier bred from a Smooth Fox Terrier, this terrier’s size made a perfect way to hunt small game and vermin on farms, it is convenient to transport. These days, they are known for their charming personalities, loyalty, and energy.

The Toy Fox Terrier stands at 8.5 to 11.5 inches and weighs 3.5 to 7 pounds. The TFT’s coat is short, smooth, and comes in a variety of color combinations. Its big ears – described as bat ears – and small heads make for a goofy and endearing look, hinting at its big personality.