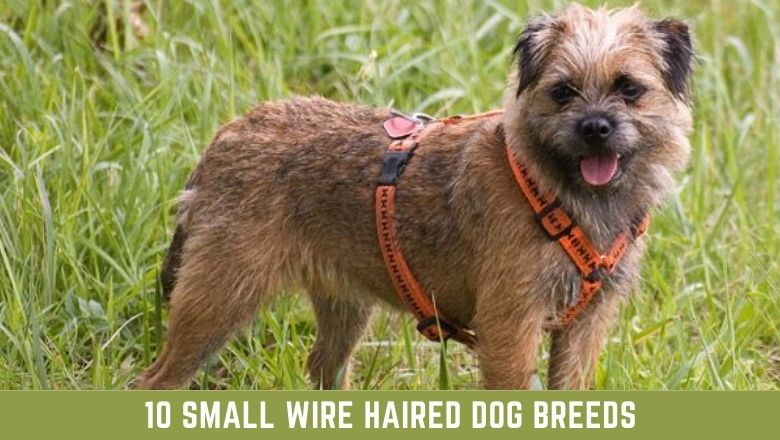 In this article, you will know the answer to the query “10 Small Wire Haired Dog Breeds“.

If you have decided to add a small wire-coated dog to your family, then you have made the right choice.

I have a list of breeds that includes the Wire Haired Fox Terrier.

The Wire Haired Fox Terrier is famous for being Tintin’s beloved pet, but it is also the most successful dog breed of all time at the Westminster Dog Show, winning it 15 times.

So, how does a wire-haired dog get its wiry coat? Next up, I’ll tell you more about that.

How do dogs get wire-haired coats?

The type of coat any dog breed will have is determined by only three of these genes.

If a dog possesses the FGF2 gene, it will either have short hair or long hair.

Hair Curly or straight is determined by the KRT71 gene.

In addition, the RSPO2 gene determines whether a dog will have wiry hair or not.

Wire coats are also sometimes referred to as “broken coats.” Did you know that?

Let’s move on to the purpose now that we have cleared up the science.

Weird coats on dogs: why do they have them? Let’s find out.

What is the purpose of wire-haired coats?

These dogs were developed to chase their prey through harsh and prickly undergrowth, which is why they had wire-haired coats.

An animal with a wiry coat has more protection against prickles and thorns than one with a softer coat.

If you will, a wiry coat is like a suit of armor made out of metal.

The next step is to look at the advantages and disadvantages of wirehaired dogs.

I believe that the biggest advantage of owning a wire-haired dog breed is that they don’t shed their coats as much as other breeds of dogs, so they’re a better choice for people with allergies.

What are the disadvantages?

It is necessary to hand strip wavy-haired dogs to groom them properly.

A groomer is better qualified to handle hand stripping, which can be time-consuming and fiddly.

Having their dogs clipped is a shortcut that many people use.

Over time, this could damage the wiry texture of the coat.

Known as one of the many terrier breeds, the Wire Fox terrier has a comical expression and a funny beard, making him one of the most energetic dogs.

Those of this breed have a wiry, rough coat that can range from pure white to various mixes of black and white, black white and tan, or white and tan.

If you want to keep tangles at bay and keep your pet looking neat and tidy, you should brush this pet at least once a week. The Wire Fox terrier sheds very little.

In the 20th century, Smooth Fox terriers and Wire Fox terriers were separated from one another after being considered one breed for nearly two centuries.

In adulthood, the Wire Fox terrier will grow to be 1512 inches tall (40 cm) and weigh around 18lbs (8 kg), with the female being slightly smaller.

In the first decades of the 20th century, Caesar, the favorite dog of King Edward VII, was the most famous Wire Fox terrier. Due to the king’s attachment to the dog, the terrier was quite popular throughout the British Empire.

Known as the King of Terriers for its size, intelligence, and prey instinct, the Airedale is the largest type of terrier, as they were originally bred as hunting dogs before becoming family pets.

In contrast to other terriers, the Airedale always has a hard, wiry coat. In order to prevent matting, an Airedale needs to be brushed 2-3 times per week. Airedales need to have their coats trimmed every 6-8 weeks, preferably by a professional.

The AKC standard for this breed specifies that a purebred Airedale must have a tan head and legs and a black or dark grizzle saddle. In general, large wirehaired dogs are between 22 and 24 inches tall and weigh about 40 to 50 pounds (18 to 23 kilograms).

Airedales make excellent companions and are very loyal to their owners despite being independent and a bit stubborn.

Border Terriers are easily recognizable by their otter-like head and their double coat consisting of a wiry outer coat and a fluffy undercoat.

Border terriers have short, wiry hair on the outside, and their coats are commonly blue and tan, grizzle, and tan, although you can find red or wheaten Border terriers.

You will need to brush your Border terrier every week or even every day during shedding season, even though its coat is weather and dirt-resistant. It is not recommended to take a bath as this damages the coat’s dirt-repellent abilities.

In addition to being smaller than other terriers, Border terriers are fun-loving and sweet-tempered, making them the ideal pet for a family with children. Having been bred for the purpose of hunting foxes, they are extremely trainable thanks to their natural love of being put to work. To burn off their impressive amounts of energy, they will need plenty of exercises, preferably in a park or yard where they can jump and run.

Despite their small size, these dogs make up for it with their personalities. When you look at a Brussels Griffon, you will realize this is a dog that knows what he wants.

This adorable bundle of energy has been bred from several breeds, including the Affenpinscher from which it inherited its miniature size and wiry coat, as well as the English Toy Spaniel, whose round irresistible eyes make it stand out.

Their coats vary in color from red to black, or they can be a mix of colors. Brussels Griffons can either have a smooth coat, or a short rough one with short wiry hair.

A boisterous young child will put the Brussels Griffon to sleep, but he gets along very well with the rest of the family.

There are three types of coats for Dachshunds – smooth, wire-haired, or long-haired and wavy, as well as a wide variety of colors – black, chocolate, fawn, cream, and anything in between.

A small wirehaired dog requires brushing or combing at least twice a week, and its beard and eyebrows should be trimmed every now and then.

The Dachshund was originally bred in Germany to hunt badgers, and was a national symbol for the country for a long time, making its popularity during WWII a concern.

Pet owners were however unwilling to give up their pets for politics, which is why the Dachshund was simply known as the ‘badger dog’ during this time, and their German-sounding nickname was never mentioned.

Jack Russells are one of the cutest and most affectionate members of the large terrier family. They can have short hair or long hair or a rough, wiry coat. Jack Russell dogs are predominantly white with tan or black markings, especially on the head and ears.

Jack Russells with rough coats should be brushed twice a week and stripped once every two years. To remove dead hair, you need to use a stripping knife found at the pet store. You should leave this to a professional if you have never done this before.

The Jack Russell terrier has made a career in movies and television shows. Eddie was the character played by Moose and Enzo, father and son on the long-running TV show Frasier.

A Scottie’s beard and long hairs on the legs and lower body are sure signs that it’s a Scottie. Their double coats are rough and wiry on the outside, and soft, silky on the inside.

A good brushing once a week is required for Scottish terriers who shed moderately. The hair should be trimmed occasionally as well.

Despite what most people think, you can also find black brindle, red brindle, or wheaten Scottish terriers.

Even though they are rather small dogs, only 10 inches (25 cm) tall and weighing 18-22 lbs (8-10kg), they possess a sturdy and strong body, as well as are quite agile when they want to be. Although Scottish terriers were originally bred for hunting, they do not enjoy running and prefer to walk with their owners.

In Franklin Roosevelt’s time, Fala, a Scottish terrier, received more fan mail than many US presidents.

In German, Affen means ape, while pinscher means terrier. So Affenpinscher are actually called Monkey Terriers. Considering their hairy heads and funny faces, they sort of look like monkeys, too.

Affenpinschers need to be groomed twice a week because of their medium-length, wiry coats. Additionally, you should trim the hair on their heads in a V-shape to prevent it from getting into their eyes.

Affenpinschers usually have a black coat, but you may find some in tan, red, or silver as well.

Since they were meant to hunt rats and fit in small spaces, they were intentionally bred to be small in size, however, it is this miniature size that makes them so popular as pets today.

Male Affenpinschers weigh 7-8 pounds (3-4 kg) and grow up to 10 inches (25 cm) tall. Since they hunt rats, they don’t get along with rodent pets like hamsters.

The Kerry Blue Terrier has been bred as a hunting dog to keep vermin in check, and later as a herding dog. They have a much softer coat than other terriers, rather than being wiry like other breeds.

In order to prevent matting, a Kerry Blue terrier must be brushed every day and bathed at least once a month. Because its hair is long, trimming it should be left to the professionals. The color kind of speaks for itself.

It is not uncommon for some puppies to be born jet black, but their coats lighten up to the distinctive bluish color. The good news is that they shed very little hair, so there won’t be a lot of hair around.

Kerry Blue dogs, like many of their terrier cousins, tend to dig, chase, and bark a lot. While they are adaptable to living in apartments, they need plenty of exercises.

Miniature Schnauzer coats are available in three colors, black, salt and pepper, or silver, and they have a short wiry hair topcoat and a thick and soft undercoat.

Grooming such a coat can be quite challenging, so you should visit a professional every two to three months. You can brush your dog once a month and shower him every month in the meantime.

Despite the fact that they might look like Uncle Wally, Miniature Schnauzers are all about fun, they have an outgoing personality, and they enjoy spending time with their families.