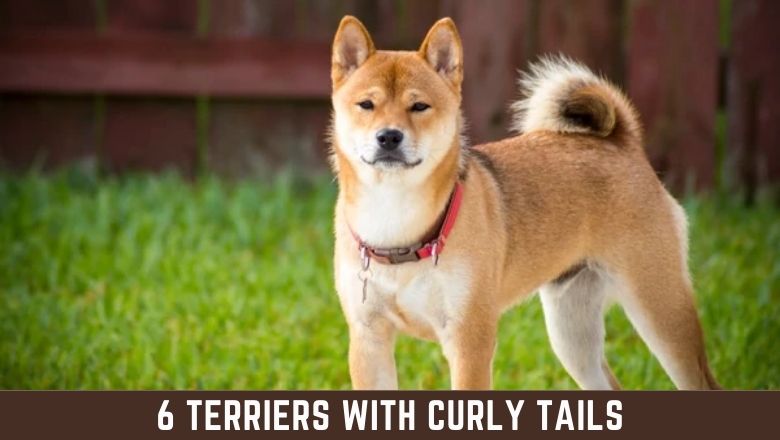 In this article, you will know the answer to the query “6 Terriers with Curly Tails“.

There are 31 breeds of Terrier, according to a list compiled by the American Kennel Club.

There is not a Terrier breed that has a tail that has a real curl to it in any of the breeds that I’ve listed about dogs with curly tails.

True Terriers have curly tails, and those with straight tails aren’t Terriers.

There is a tail on the Black Russia Terrier

The breed was developed by mixing seventeen different breeds, and only one of them was a Terrier.

There has been a tradition of docking the tails of many Terrier breeds.

Even though many of us now think that docking tails is unnecessarily cruel, it had an important purpose.

A Terrier is a small dog whose primary duty is to hunt prey, such as rabbits and rats, and to follow them into burrows if necessary.

Having a shorter tail makes it much less likely that the dog will be injured, and having a docked tail gives the owner something to hold onto if their dog becomes stuck.

Let me begin by highlighting the six terrier breeds with a slight curl.

American Hairless Terriers are relatively new but are already gaining popularity among dog owners, especially those sensitive to allergens.

It is practically identical in appearance to the Rat Terrier – minus the fur, of course – which makes sense because they were bred from each other.

The American Hairless dog breed was created almost by accident from the Rat Terrier breed, but I hope we can agree that it was a happy accident that benefits dog lovers all over the world.

A dog’s tail should be held upright in a slight curve when it is alert, according to the breed standard.

American hairless dogs look like toy dogs, but they are considered working dogs due to their high intelligence and energy. Families with children will love their lively, friendly, and sociable nature.

A hairless American can weigh anywhere between 5 and 25 pounds and grow up to 18 inches in height.

The Bedlington terrier, which has curly fur like fleece and an adorable pear-shaped snout, is quite possibly the cutest of the bunch.

Its tail should be scimitar-shaped, low-set.

As with most terrier breeds, the Bedlington has loads of energy and can jump, play, and frolic all day long.

The Bedlington is an affectionate and good company, but it’s also highly intelligent and intuitive, making it a favorite in the show ring and also a good watchdog.

In the shoulder area, the Bedlington dog can reach 15 to 16 inches in height and weigh 17 to 23 pounds. Any color with tan points, except blue, liver, or sandy, can be used for their coats.

The Dandie Dinmont is another terrier that is often mistaken for a toy or lap dog due to its cuteness, short stature, long body, and large head, and large round eyes.

Dandie Dinmonts are intelligent, energetic, affectionate, and sociable, making them an excellent choice for active families with children.

Dandies are known as gentleman terriers because of their reserved personalities. They are the calmest of the bunch.

They require just as much attention and affection as most terriers, even though they are quieter.

Quite a rare breed, the Dandie Dinmont is one of the most prized breeds in the world.

A very small number of them were registered with the AKC in 2019.

They were ranked 176 out of 196 breeds- such a low ranking doesn’t just make them hard to find, but it also indicates that they are in danger of extinction!

The Manchester Terrier is not considered cute by most people. It might be agile and athletic, but it definitely isn’t cute.

It’s hard to imagine that a dog as large as the Manchester, weighing between 12 and 22 pounds, belongs to the same family as the Dandie Dinmont.

The two breeds share innate terrier qualities, such as spirit, energy, friendliness, and liveliness, which makes them so endearing.

Like its older brother, the Dandie Dinmont, the Manchester has a more reserved temperament – there is no pawing or begging – but both crave affection and attention from their humans.

You should be aware that Manchester can be stubborn and even more energetic than most Terriers, and that they have a strong hunter instinct, which makes them less suitable for families with children.

What about their tail? Their tales should be carried in an upward curve, much like the American Hairless Terriers.

The Soft-coated Wheaten shares the same pear-shaped snout and curly coat as the Bedlington but has its own distinct short tail that makes it one of the most popular pets among children.

In return, the Wheaten is a happy, devoted, loyal, and intelligent pet that is highly extroverted and loves the feeling of affection.

In this breed, docked tails are preferred, but natural tails should be upright and curved slightly forward.

Wheaten terriers require regular exercise, maybe even more than other terriers, and while their curly coat doesn’t shed as much as it looks, it does need to be brushed almost every day to prevent matting.

Depending on the coating, the wheaten can range from a light beige to an almost gold color.

Height and weight range from 17 to 19 inches and 30 to 40 pounds, respectively. Designed for active families with children with great attention to detail.

Lakeland Terriers, or Lakies as they are affectionately known, were bred to hunt foxes that preyed on sheep. Therefore, don’t be fooled by their adorable snouts and small stature – there’s a lot of muscle beneath their hard, wiry coat.

Docked and upright, its tail should be bent slightly towards the head.

They do have the same terrier-like intelligence, playfulness, and alertness, but can be strong-headed and require a confident owner or an experienced pet parent to train and socialize them properly.

They are suited to apartment living, but only if they are exercised daily, and a yard or outdoor space to run in will be very beneficial for them.

We have looked at those terriers whose tails should have a slight curve, and it’s time to move on.

The next three breeds are prohibited from having curly tails.

Airedales are considered the King of all Terriers. Aside from being intelligent, friendly, and affectionate, Airedales are playful, witty, and clever, which will delight their owners.

Despite their charm and sociability, the Airedale is quite intense and requires firm handling when it comes to training and setting boundaries. It would not do well in an apartment, since the Airedale requires a lot of running space to manage its energy levels, such as a yard or a trip to the beach.

You should choose a less demanding pet if you cannot maintain the King Terrier’s physical needs.

Airedale terriers typically reach heights of 21 to 23 inches and weigh between 40 and 65 pounds.

Its tail should not be curled over its back but carried gaily.

With the same level of intelligence, athleticism, and working-dog resilience as most terriers, but with the body and proportions of a toy dog, the Norfolk terrier is often called a big dog in a small package.

The tail of the animal should not be curly, but straight.

Norfolk terriers need daily exercise like all terriers but are better adapted to small homes because of their small size. A friendly, sociable, affectionate friend, it will love to play and romp with you.

The Norfolk is a very trainable and well-behaved dog compared to some of its terrier cousins.

Its maximum height at the shoulder is 10 inches and its maximum weight is 11 to 12 lbs.

Scottish Terriers are very agile and athletic, despite their size, and have a powerful bark that scares away burglars.

Since they have short legs, they won’t be joining you for regular jogging anytime soon, but they love taking long walks.

Scottish Terriers can grow up to 10 inches in height and weigh between 19 and 22 pounds.

What about its tail? The tail should never be docked and carried upright.