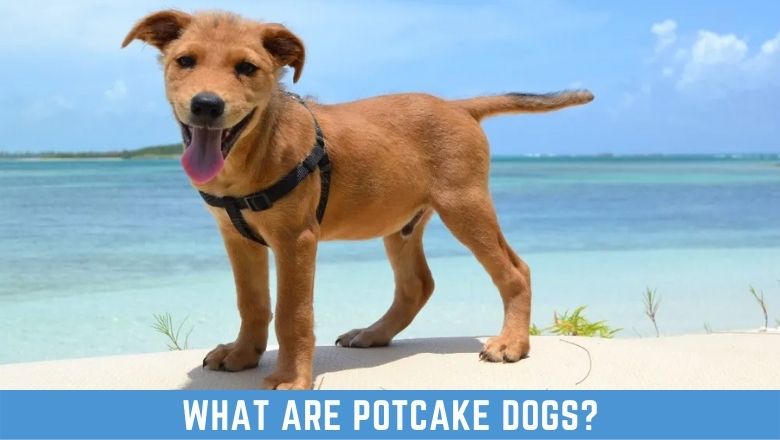 In this article, you will know the answer to the query “What Are Potcake Dogs?“.

Strays in the Caribbean might constitute the largest number of animals, but locals and foreigners alike are doing their utmost to give these animals a permanent and loving home.

A pot cake is known for its friendliness, energetic enthusiasm, and loyalty to its human family.

Royal Bahamian Potcake dogs (Potcake dogs for short) are mixed-breed dogs that are native to the islands of the Caribbean since interbreeding occurred centuries ago.

Dogs like pot cakes are less distinguishable than Collies, Golden Labradors, and Dalmatians.

Their common features, however, distinguish them.

Dogs of this breed are generally medium-sized, have long muzzles and cropped ears, as well as short, smooth hair without an undercoat.

Despite lacking an undercoat, Potcake dogs can survive in all types of weather (except extreme cold).

Potcakes have not explored their formal training to its full potential.

Among other things, Potcake dogs are trained to detect guns, drugs, bombs, and arson, according to the Inter-American Development Bank.

In addition, Potcake dogs can be trained to act as diabetic alert dogs, trained to detect high or low blood sugar levels in diabetics, especially those with Type 1 diabetes.

In contrast to German Shepherd dogs, Potcakes tend to stray if left alone for extended periods of time.

Their genes are to blame; it’s not their fault. Native to the Caribbean, the breed was known as Mutts or Mongrels due to its tendency to roam the streets.

They are energetic, social, and adventurous because of this history of freedom.

Despite not liking the cold, the Potcake dog can easily overheat when the weather is very hot.

Strangers do not scare them easily, and they enjoy socializing with both humans and other dogs.

History of the Potcake dog

Genetically, the Royal Bahamian Potcake dogs are a melting pot of the history of interisland migration in the Caribbean and the impact of colonization.

Due to centuries of interisland migration, Potcake dogs share a common ancestry in the Caribbean.

In the past, when the Arawaks or indigenous people from South America arrived in the Bahamas, they brought their dogs with them (who wouldn’t right?).

However, the arrival of dogs didn’t end there.

To protect ship supplies from rodents, territories were also imported from other Caribbean islands such as Abaco and New Providence.

During the American Revolutionary War, ships from North America carried loyalists bringing dogs with them.

The Spanish settled the islands with their own dogs as well.

Potcake dogs are the result of interbreeding among these two species.

Potcake derives its name from the term open, “potcake”, which is used to describe a congealed Bahamian riced and peas mixture found at the bottom of a pot.

Traditionally, this mixture was fed to dogs.

As of the late 1970s, the Potcake breed has been designated as a breed of dog. Previously, it was called The Royal Bahamian Potcake.

Many dog rescue operations are helping to find loving homes for Potcake dogs outside the Caribbean, even though purebred dogs are coveted pets.

Dogs of this size are known as pot cakes.

The height and weight of an adult Potcake can reach up to 24 inches.

Women are usually smaller than men.

The pot cake is loyal, intelligent, and playful.

These animals can form a strong bond with their owners, make excellent pets, and have intelligent, emotional eyes.

The disposition of these animals is usually relaxed, but they are curious as well.

The pot cake is usually low maintenance and doesn’t require too much to be happy. Food, however, is a resource that can be guarded naturally.

Generally, Royal Bahamian Potcakes have a solid build and can withstand ailments that affect dogs of a higher pedigree.

Potcakes are susceptible to a variety of health conditions, as are all breeds. Below are some of the most common health problems affecting Potcake dogs.

Heartworm: This condition is most common among dogs who live in hotter, more humid climates since mosquitoes thrive in these environments. Dogs from all geographical demographics have been reported to suffer from this condition. Dirofilaria immitis, a parasitic worm, causes heartworm disease and spreads through the bite of a mosquito. Potcakes become hosts to these worms when they are bitten, and they mature into adults and breed inside the dog. A heartworm infection can cause heart failure, lung disease, organ damage, and even death.

Ehrlichia: The tracker dog disease and tropical pancytopenia in dogs. It is transmitted by bites from brown dog ticks. Potcakes are also susceptible to the disease, which is especially severe in German Shepherd Dogs and Doberman Pinschers.

The three stages of Ehrlichiosis are as follows:

Osteoarthritis: Also called Degenerative Joint Disease (DJD), this is characterized by inflammation of the joints caused by cartilage degeneration. This condition can be predisposed to pot cakes due to poor nutrition, elbow or hip dysplasia, fractures, or ligament tears, age, or obesity.

Allergies: Although Potcakes have a strong stomach, they can have food allergies and are hypersensitive to insect bites and stings. Additionally, allergies can cause skin irritation, hair loss, and skin dryness. Owners have reported that pot cakes can also develop gingivitis and gum inflammation.

The pot cake is an independent dog that does not need constant human interaction. Despite this, when given the opportunity to interact with humans, they are loyal and very fun to be around.

You should watch out for signs of Kennel cough and pneumonia if you are adopting a Potcake from a local shelter.

You should have your Potcake dewormed for the prevention of heartworm disease, which can be life-threatening.

Be sure to check your pet for mites, skin infections, pink eye, gingivitis, as well as dental problems.

Potcake dogs are capable of adapting to most weather conditions, but sometimes it’s difficult to change to a foreign diet. It is possible that they will have an allergic reaction to some pet food purchased in stores. Consult your veterinarian if they experience allergic reactions or decreased appetite.

Make sure your Potcake doesn’t have a urinary tract infection if he is frequently urinating small amounts throughout the day.

A puppy needs between 18 and 22 hours of sleep a day. There are several signs to watch out for if your toddler is lacking sleep, including biting, mischievousness, and hyperactivity.

A Potcake’s routine should include exercise and obedience training as well.

Potcakes that are very young or older may need extra assistance in adjusting to their new environment. They will thrive, however, if thoroughly cared for.

A pot cakes stomach is known to be strong. Generally, they don’t have fussy eating habits but check their diet if they are allergic to something.

As with all dogs, Potcakes need to be fed according to their size, activity, and pre-existing conditions.

The most common color for pot cakes is brown; however, they also come in shades of red, yellow, black, white, and cream. Grooming is relatively easy because they have short fur and rarely have an undercoat. However, keep in mind that they can heat up quickly, so a bath every once in a while is recommended.

Every time you adopt them and every time you care for them, their fur needs to be checked for ticks. Make sure their gums and teeth are healthy.

Children And Other Pets

Potcakes aren’t known to be aggressive. Quite the contrary, they make wonderful companions and pets. There are, however, some signs they guard their resources. When they value something, they will guard it. Guarding is not an attempt at dominance.

During meal times, aggression may occur, so make this a relaxing and calm time. Consider removing young children and other pets if the aggression increases over time.

In the greater American North, there are many organizations that rescue Potcake dogs. Donations can be made by US taxpayers to organizations in their native homelands that care for Potcake dogs, such as the Bahamas Humane Society.

What Are Potcake Dogs? (Watch Video)