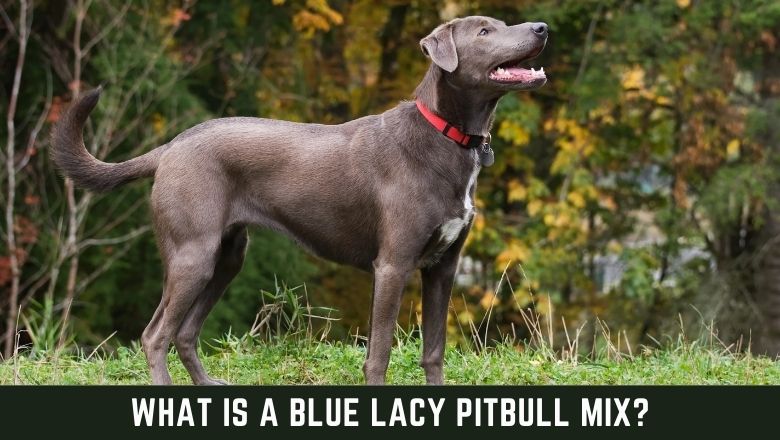 In this article, you will know the answer to the query “What Is A Blue Lacy Pitbull Mix?“.

People love their pets in a similar way to how they love their children, and our dogs are the same way.

A breed is available for almost everyone when it comes to choosing a pet.

There is a dog out there for everyone, no matter if it’s something small and portable like a Yorkshire Terrier or a Pug, or something lean and fast like a greyhound or a lurcher.

Breeds that are sturdy and energetic are many choices for those who prefer those characteristics.

A Pitbull and a Blue Lacy are popular breeds to choose from. Each of these breeds will be discussed, along with the pros and cons of a cross between them.

What is a Pitbull?

The Pitbull dog descends from a breed of dog developed in the UK in the early 19th century known as the Bull-and-Terrier breed.

Originally, they were used for dogfighting and rat baiting. In addition to the Bull-and-Terrier, it is the product of cross-breeding the muscular Old English Bulldog with the more athletic Black and Tan Terrier. Both of these breeds are now extinct.

Pit bull-type dogs were not initially recognized as a breed, but in 1935 the American Kennel Club in the United States accepted them as Staffordshire Terriers.

The Kennel Club of the UK also recognized a closely related breed as the Staffordshire Bull Terrier in the same year.

In order to avoid confusion, The American Kennel Club renamed the variant in the United States as the American Staffordshire Terrier in 1972.

Pitbulls are not considered Staffordshire terriers in the United Kingdom.

Because of their reputation as fighting dogs, as well as a string of high-profile media reports about attacks by such dogs, Pitbulls are illegal to own in the UK and many other countries.

There are many different colors of Pitbulls. They often have different patches of color across their bodies.

Its large, square head and muzzle, coupled with the well-defined muscles surrounding it, give them a powerful appearance. They typically have rose-shaped ears or half-pricked ears.

They have short, smooth, and shiny coats. Having a tight coat accentuates the appearance of their muscular frame.

What is a Blue Lacy dog breed?

In the mid-19th century, the Blue Lacy dog was bred in Texas to help with herding, hunting, and ranching. There is no major organization that recognizes the breed.

In spite of this, it has been designated as the “official state dog breed of Texas” by the Texas Senate.

It is a working dog that is strong, fast, and lightweight. Having a job to do and being able to run around are two of its favorite things. Lacys come in red or tri-colored coats, despite their name.

How big would a Blue Lacy pit bull mix be?

In America, all of the breeds that are classified as Pitbulls have very similar appearances.

In view of this, a crossbred of the two would likely stand 17-21 inches tall, with a male tending towards the top of that range. Crosses should prove lighter than Pitbulls and somewhat slimmer around the shoulders.

What type of personality would a Blue Lacy mix have?

Pitbulls are powerful dogs with a fearsome reputation, perhaps undeserved.

The majority of Pitbull lovers believe that dogs are not aggressive by nature, and studies show that they are 5-6% less likely to become aggressive than the popular Collie dog.

The pitbull is very good with children and will enjoy playing with and engaging with them.

Blue Lacy dogs are naturally intelligent and have boundless energy.

Despite their strong-mindedness, they should be kept engaged to avoid negative tendencies.

Due to the fact that both breeds are energetic and capable of running all day, any crossbreed would also have boundless energy.

These two breeds tend to be aggressive towards other animals and possess a fierce sense of territoriality. If they encounter any smaller animals, they are likely to attack them.

When meeting strangers, the Blue Lacy, in particular, can be quite aloof. If properly trained, a cross dog may make an excellent guard dog.

Considering the above, consider carefully before purchasing a Blue Lacy Pitbull mix.

The Blue Lacy gene may enable them to be excellent guard dogs and working dogs, but they might play rough.

The two breeds of dogs are generally good with children, but as powerful animals, it might not be the best choice for a family with young children because the dogs may get knocked over or hurt accidentally.

This breed should not be bought if you plan to keep cats and other small animals with high prey drives, which will undoubtedly be present in any crossbred.

When you decide this combination is right for you, start training your puppy early.

As your puppy grows, it is extremely important that it is socialized so that it grows up comfortable around other people and is not overly protective of you or prone to shying away from strangers, as this can result in defensive behaviors.

As a result of the Blue Lacy legacy, you should ensure that you reinforce desired behaviors with clickers and treats.

It is certainly possible to consider professional training.

Are there any specific health needs for a Blue Lacy pitbull cross?

Due to both breeds’ energy and abilities to run all day, you are going to get a crossbreed that also has oodles of energy.

Take them for multiple walks per day and consider other exercise options, such as playing fetch, to make sure they are running around and burning off some of that energy before you bring them home.

In later life, both breeds are susceptible to Elbow and Hip dysplasia, like most breeds.

Although this is not life-threatening, it can be extremely painful, and medication may be needed to ease the pain. In addition, they are both vulnerable to skin diseases, which can be treated with medication.

Breeds of Pitbulls can suffer from Cerebellar Abiotrophy, which damages the brain and causes some loss of balance and coordination in the dog.

Generally, Blue Lacys are hardy, but they can suffer from hypothyroidism and food allergies.

Therefore, any crossbreed has a high probability of having both elbow and hip dysplasia as well as some or all of the problems associated with both breeds. Having said that, crossbreeds are typically more healthy than purebreds.

What if you’ve made a mistake in buying a Blue Lacy Pitbull cross?

You should carefully consider buying either of these breeds. A crossbreed is also worth considering. Both dogs are good working dogs and would run for days if given the chance. Both are easy to train and happy to work for rewards. Many Pitbull owners swear that their dogs are gentle and well-behaved with children, even going so far as to call them “nanny dogs.”.

A Blue Lacy Pitbull cross will do better for you and the animal itself if you are happy to have it in your home. If you find that your dog is not a good fit for your family, there are many rescue organizations and shelters in the United States that will help you rehome your bully dog.

A crossbreed is by nature healthier than a purebred dog, as the genes that have been selectively bred into an animal are then mixed back into a larger gene pool.

In many ways, however, the Pitbull and Blue Lacy are similar in personality, so you can expect to receive a playful and energetic, family-friendly dog that loves attention from its owners, but is not tolerant of other animals.

In order for these breeds to reach their full potential as pets, we recommend housing them within a family with older children and ensuring that they are socialized early.

What Is A Blue Lacy Pitbull Mix? (Watch Video)