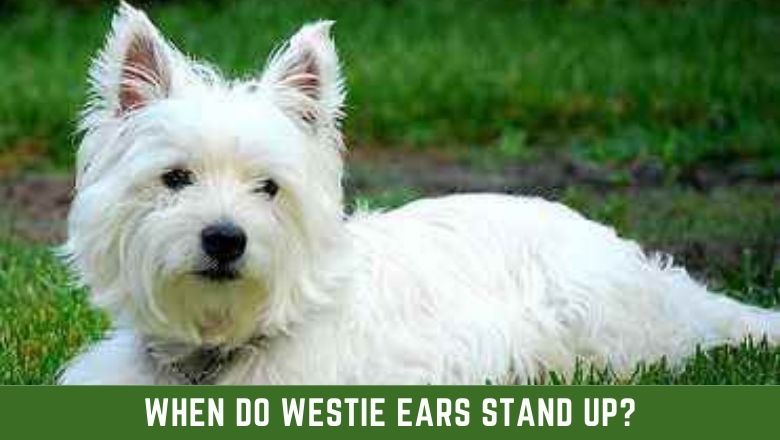 In this article, you will know the answer to the query “When Do Westie Ears Stand Up?“.

Unlike us humans who have had our ears raised or pointed our entire lives, our little Westie pal here might have a different take on things.

Despite how cute our Westies can be with their floppy ears that bounce, as they run majestically back and forth, you might wonder (or at least, at some point in time), will his ears ever stand up?

Is floppy destined to stay that way forever (gasp!)?

Is there anything we, as owners, can do to help? We were wondering the same thing too, so we’re glad you asked!

You’re in good hands because we’ve got you covered.

When do Westie Ears Stand Up?

The ears will straighten when they are playful or excited, but if they are nervous or anxious, the ears will curve downward.

West Highland Terriers have an extremely difficult time telling when exactly their ears will start standing up straighter.

The typical age of such a baby is between eight to twelve weeks. Some Westies, however, may take as long as six months to straighten out their ears. Sounds like quite a puzzle, doesn’t it?

You’re in luck because, in this article, we’ll tell you exactly what you need to do to get a better estimation and how to take care of your friend’s ears!

That’s enough chit-chat for now, shall we get down to furry business?

The best way to do this is to ask the breeder (since they know your pal and his or her whole family). The breeder might need to know two things:

Just like the star your Westies are, everything should be official and verified. The first step to determining whether your dog’s ears are supposed to stand is to identify and better understand their breed and characteristics. Their wolf ancestry is one way to determine whether their ears should stand.

When do the ears of most of their pups stand?

Chances are, if your furry friend has brothers, sisters, or cousins with standing ears in less than 3 months, yours will too! When their ears do not stand within 8 months, it is unlikely that they will stand at all.

What physically makes a dog’s ears stand up?

In this case, it is their Cartilage, so it is no surprise that it has to do with a dog’s body structure. When our furry pal reaches four to six weeks of age, the cartilage in its ears will start to mold and harden.

Do not panic just yet if it still won’t stand! You might even have to wait six months for your dog’s ears to be strong enough to stand on their own. In contrast, if your precious little pal has thick and heavy ear leather, chances are it will remain like that for its entire majestic lifetime.

Why do some people tape their Westie’s ears?

Dog owners have used ear-taping as one of the most common methods to get those ears standing tall and proud. Through the use of a medical cloth tape, the ear is aligned and kept steady to “train” the ears to stand on their own.

During this procedure, it is imperative to remember that everything must be done correctly and adequately. We don’t want our Westie to have any problems. Here are a few important things to keep in mind before you tape those furry ears to ensure it is done properly and safely.

We might surprise you by telling you that teething has an effect on dog ears (who knew?). Puppies grow a new set of teeth as they mature, so teething is a normal part of maturing. Is there an explanation for this? Of course.

If your Westie is teething, his body naturally needs calcium to help grow those newly formed teeth so he can eat those delicious treats. As some calcium is lent for teething, the ears may fall back down if they were previously erect. Once teething is over, your pup’s ears should stand straight up again if it was standing before teething began (may all pups rejoice at this time).

Should I be worried if my Westie has one ear up and one ear down?

Relax by taking a deep breath. As a Westie matures and develops over the years, it is completely normal for it to only have one erect ear. What is the reason for this?

It is important to keep in mind that the “when” depends on the breed itself. Some breeds might have it early while others might not. It might also be a cuteness-enhancing feature.

Around 8 months old, most puppies will have both ears fully upright, which means teething is finally a thing of the past. Try to hold back your tears, even though it may be difficult, as you watch those ears graduate from standing school.

Because dogs have sharper ears than people, they can pay more attention and be aware of their surroundings. It is possible that this is a way of showing off their awareness skills when one ear stands while the other remains asleep.

Westies are usually known for having pricked ears, but if you see a floppy ear after they develop, that is not an unusual occurrence. Your pup should be checked by a veterinarian if you notice anything concerning to his health:

You should always keep an eye and an ear open for any of these symptoms in your beloved Westie. As a knowledgeable dog owner, you should seek help as soon as possible once you identify the condition.

If your Westie is mixed or not purebred, erect ears may not always be the case! To give you some examples that may not have erect ears (you’re very welcome), here are a few of them:

Breed mixes of some of these dogs may or may not have erect ears. Regardless of Mother Nature’s ear shape, you can rest assured your furry friend will always be adorable just how they are!

How to care for your Westie’s ears?

It is important to take care of those enticing ears, especially to avoid those frightening health problems (never fun). Tipping is a common practice among Westies for taking care of each other. The ear’s edge is carefully trimmed to achieve a nice “V” shape. To accomplish this, and to give your pal a sharp look, you must take note of and follow proper instructions.

Tipping your Westie’s ears will not help its ears to stand, but it will keep them clean.

Even though we’d love to tell you an exact time, we aren’t fortune tellers. The development process and environment of Westies vary depending on their breed (purebred or mixed). As a result, each pair of dog ears rises and shines at its own pace, just like the sun and moon. Have patience! You never know when that special moment will come.

When Do Westie Ears Stand Up? (Watch Video)