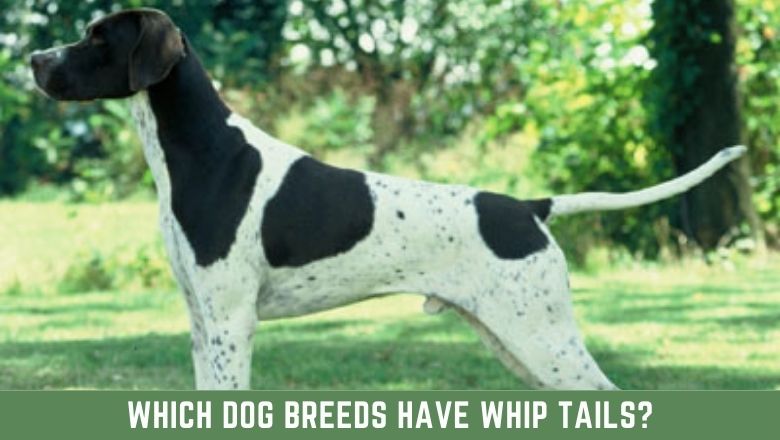 In this article, you will know the answer to the query “Which Dog Breeds Have Whip Tails?“.

Different breeds of dogs have different types of tails, which generally identify the type of breed. If you look at your dog’s tail, you can tell exactly what he is feeling, whether he’s excited, scared, or upset.

The tails of some dogs are curled up like a corkscrew, while the tails of others are thick and long like that of an otter. Some dogs have sickle tails that curve and point towards the head, while others have thin and long whip-like tails.

What is a whiptail?

Whiptails are thin and long tails of some animals that look like whips. A whiptail tends to start thick at the base and gradually taper to the tip as it stretches out.

Why do certain breeds have whip tails?

The reason why some dog breeds have whip tails is similar to the reason dogs have tails in the first place.

An animal will wag its tail eagerly to show excitement, or tuck it between its legs when scared or uncomfortable.

A dog’s tail does more than serve as a means of communication, it also contributes to the breed’s natural characteristics.

Sighthounds like Greyhounds, Whippets, and Wolfhounds have long, narrow tails that act as air rudders and help the dogs maintain their balance and stability at high speeds while running.

While running after vermin at high speeds, this whipped tail also acts as a brake. Sled dogs, such as Siberian Huskies and Alaskan Malamutes, have thick and plumed tails that enable them to withstand extreme weather conditions while hauling heavy freight.

The majority of dogs with whiptails are hunting dogs, including many sighthounds and scenthounds. Breeds of dogs such as these are suited to visual acuity and speed.

Besides having amazing eye-sight for fast-moving objects like animals they hunt, they have long, lean legs and powerful bodies for running at Their fast speed allows them to chase down prey while maintaining balance throughout the chase.

Over 3,000 years ago, the Pharaoh Hound was bred in Egypt. The Egyptian Pharaohs once used this breed as a hunting dog, which is why it was named after them. Pharaoh Hounds are very affectionate, adaptable, and great family companions despite being the companion of kings. Besides being very athletic, Pharaoh’s hounds can sleep all day after a high-speed chase.

Ancient sighthounds make wonderful companion dogs and are lovable. They have an exceptional eye for fast-moving objects, as well as the ability to sprint up to 39 to 43 mph.

Greyhounds were originally bred for hunting. Greyhounds are known for their kind disposition, making them the perfect pet for children and families. In addition to Norman, Bambi, and Sophia, Kylie Jenner keeps three Italian greyhounds.

Manchester Terriers, also known as Gentleman’s Terriers, were developed from the cross-breeding of a whippet and a terrier in Manchester, England.

Dogs of this type are very active and very spirited and are often used to chase rabbits and rodents. Chasing is their favorite pastime, and they are very affectionate towards their owners. They make great companions for families with kids due to their high spirits and energy.

Porcelain is a highly intelligent combination of French and English scent hounds, originally bred as a hunting dog. Dogs of this breed have a shiny and beautiful coat, a graceful pose, and resemble porcelain figurines statuettes.

Plott hounds are the state dog of North Carolina. Its voice is sharp and high-pitched, making it a relentless scent hound. Due to their excellent sense of smell, Plott hounds make excellent search dogs because they are loyal and trainable. K9 deputies for the Guildford County Sheriff’s Department are Plott Hound puppies.

With the elegance of a deer, the Ibizan hound is a natural hunter. A wild hunter, this dog breed has been hunting rabbits and small game for thousands of years due to its long legs, powerful body, and tenacity. The breed is calm, polite, and loving as well.

Azawakhs (pronounced Oz-a-wok) is West African hunting and guard dogs. As they hunt down hares and gazelles, their lean body and legs make them very swift and agile.

Objects moving quickly will trigger their chase instincts, since they are sighthounds. It is possible to have an Azawakh as a family pet, and they can be loyal and protective of their family.

With a strong resemblance to greyhounds, the Podenco Canario is a very lean, agile, and athletic dog. Podencos were used to hunt rabbits in packs and are considered hounds in Spanish. It’s smart, active, and loves playing with kids, making it a wonderful family dog. There are seven different varieties of Podenco, including the Ibizan hound.

English pointers were bred primarily for hunting companionship, and they are very independent, athletic, and determined dogs.

In addition to their remarkable scenting ability and endurance, pointers are also very loyal and highly teachable.

This breed was originally used mainly for hunting birds. Dogs like these have been depicted in European paintings dating from the 17th and 19th centuries.

These dogs enjoy playing with kids and are great companions.

Acirneco dell etna (Pronounced “cheer-NECK-oh del etna”) is a Sicilian guard dog that is currently one of the oldest dogs on Earth.

As a result of their long, lean bodies, they are able to hunt rabbits and other small game very quickly.

According to legend, 1,000 Cirnechi (Cirnechi is the plural) guarded the fire god Adranos’ temple on Mount Etna in Sicily.

Xoloitzcuintle (pronounced show-low-eats-queens-lee) is a Mexican hairless dog that dates back over 3,500 years.

It is named after Xolo, the Aztec god of fire and lightning, and after itzcuintli, the Aztec word for “dog.” Xolos were believed to possess mystical powers and were kept around homes to ward off evil spirits and intruders. In addition to being graceful hunters, the Xolos make helpful companions.

There is a Thailand dog breed known as the Thai Ridgeback that dates back at least 3,000 years.

About the size of a German Shepherd, this dog breed has a muscular build. It is a primitive breed that has evolved without human intervention, it has not been bred, and it resembles wolves more than most other dog breeds.

A Thai Ridgeback dog is an independent and intelligent dog with excellent hunting instincts; they are known for attacking and killing cobras.

A properly trained and domesticated dog makes a good companion and is extremely protective of its family.

Greyhounds and whippets, which are similar to sighthounds, date back to at least 750 AD, and are great hunters. Despite the fact that Peruvian Hairless dogs are mostly hairless, some have full coats of hair in the same litter as those that are completely hairless. Ancient Incan society kept hairless pups as pets, while hairy pups served as messengers and hunters.

Whippets are non-aggressive and gentle dogs. They can reach speeds of 35 mph, making them extremely fast sighthounds.

Whippets were originally used to hunt rabbits and other small game. Pets like this dog are calm and enjoy human company, so they make excellent pets. Jennifer Saunders, an actress, and comedian own two of these gentle creatures; Olive and Pip.

Petit Bleu de Gascogne is a French breed of dog that hunts rabbits and hares in packs. Despite being called petit (which is French for small), this scent hound is not small; in fact, the name comes from the fact that it was used to hunt small game and not the size of the dog itself. Generally friendly, these dogs have distinct personalities, some are very shy, others are aggressive, but all of them make good companion dogs.

IWSs are very soft and affectionate dogs that enjoy swimming, as well as having webbed feet and a two-layered, water-repellent coat, which makes them ideal for swimming.

IWSs are the only breeds of dogs with distinctive curly coat patterns. While hunting, they were mainly hunters’ companions and would retrieve waterfowl. This spaniel is the oldest of the dozens of spaniel dog breeds and dates back to the 7th century AD.