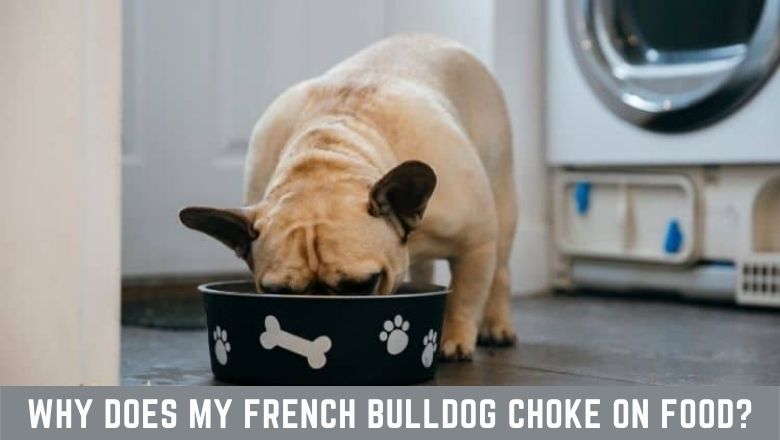 In this article, you will know the answer to the query “Why Does My French Bulldog Choke On Food?“.

Frenchies are adorable, aren’t they? They are funny and playful, have a friendly personality, and are simply adorable! This is why the French Bulldog has become so popular. This cute flat face is exactly what makes Frenchies prone to respiratory issues and choking, which makes their owners freak out. Learn what you need to know about French Bulldogs and their food problems, and, most importantly, how to handle them.

Why do French Bulldogs have difficulty breathing?

A French Bulldog’s comic face is the result of selective breeding, which encouraged the appearance of a breed with very short nuzzles. The dog’s head shrank and its face became flatter, but its anatomical structures inside the skull remained pretty much the same. It is because these tissues do not have enough space in your beloved Frenchie’s skull that he will have breathing problems. Listed below are some of the most common problems encountered with Frenchies.

Brachycephalic syndrome is characterized by all of these symptoms. French Bulldogs do not necessarily present all the above problems, so if your pet has breathing difficulties, you should consult a veterinarian.

Why might this make them choke on their food?

There have been many instances in which French Bulldog owners have witnessed their pets choking while eating. This problem is caused by the excessive amount of tissue crammed into the nose and throat of Frenchies. For some of these dogs, breathing is a struggle, and imagine trying to force some food down the throat while fighting for air. Additionally, French Bulldogs tend to be overweight, which exacerbates their breathing problems.

Last but not least, any short-nosed dog has problems swallowing, which can result in food getting into its airways and lungs, causing pneumonia.

Some gagging is to be expected with Frenchies, but excessive gagging and choking on food indicate distress and require immediate medical attention.

How can you help a dog that is choking on food?

Taking your dog to the vet is a good idea, but it won’t help when the dog is actually choking right before your eyes. If you know what to do, you can save your pet’s life. In essence, you need to act in the same way as when you see a child or adult choke on food.

A dog’s mouth should be examined first. Take out his tongue and try to extract the food piece that is causing the obstruction.

It is necessary to perform the Heimlich maneuver if this is not possible:

How can you help a Frenchie to eat slower?

French Bulldogs can choke if they eat too fast, which interferes with their breathing. Make sure he eats slowly so he doesn’t choke. There is no point in trying to reason with your pet, so you should make it challenging for him to get to the food. Here are a few tips on how to do that:

What is acid reflux and why do French Bulldogs get it?

Acid reflux occurs when acid and enzymes from the stomach and intestines travel up into the esophagus, a condition called gastroesophageal reflux. In addition to discomforting the dog, these acids can also irritate and inflame the esophagus, which is potentially dangerous. As acids accumulate in the esophagus, ulcers, narrowing, thinning, and necrosis occurs. Below are the main symptoms of acid reflux in dogs:

Due to their immature esophageal sphincters, puppies are more at risk of developing acid reflux.

What could be causing your French Bulldog to throw up undigested food?

The Frenchie’s distinctive head shape makes this breed prone to respiratory problems, as well as digestion issues. In addition to gagging and choking, many French Bulldogs occasionally vomit up undigested food. Oftentimes, you are dealing with regurgitation instead of vomiting.

The dog throws up after eating food that has made its way to the stomach, not necessarily as a result of the brachycephalic syndrome. The most common cause of vomiting in Frenchies, especially puppies, is allergies. The stomach of these dogs is very delicate and they are prone to food allergies.

Dogs that regurgitate are usually suffering from breathing problems or acid reflux. Regurgitation occurs when the dog throws up food that never made it to its stomach. Due to spasms along the trachea, the dog ends up throwing up undigested food while struggling to breathe.

How can you make Frenchie’s food safer to eat?

It should come as no surprise that Frenchies require special food, as they are very special dogs. The good news is that most dog foods aren’t safe for your French Bulldog, but you can safely feed them a variety of human foods. With beef, chicken, turkey, or salmon, you can share your meal with your Frenchie without worrying about his health. It is also safe for your dog to eat wheat and grains since they have a high fiber content. As well, rice is very good for Frenchies because it helps them with their digestive issues.

Diet should be rich in fruits and vegetables for your French Bulldog. You can feed your pooch apples, bananas, oranges, mangoes, cucumbers, carrots, sweet potatoes, or even broccoli.

Watch out for carbs in your dog’s diet because these dogs are prone to obesity.

Avocado, potatoes, grapes, tomatoes, chocolate, bones of any kind, and bread are foods that should be avoided by your French Bulldog. Limit salty foods to keep your dog healthy. Be sure to set aside your furry friend’s portion before seasoning your meal if you wish to share with him.

If you buy commercial dog food, make sure the labels are clearly labeled and avoid products that contain preservatives, cheap fillers, or excessive protein content. You should choose foods that contain whole meat, plant-based proteins, and Omega-3 fats.

Unfortunately, the flat face that made Frenchies so popular is causing them so many health problems, but there are ways you can help your dog. You should offer your dog small meals and use special bowls so they can eat slowly, thus reducing choking risks. Your veterinarian may recommend corrective surgery if your dog suffers from severe choking issues.

You should always keep in mind that French Bulldogs are prone to acid reflux and food allergies, so they require a special diet, even if they don’t have major feeding issues. Rather than feeding them commercial food, homemade foods are safer. Obviously, not everything you eat is safe for your dog, but there are a lot of options and you can have a lot of fun together at mealtime.

Why Does My French Bulldog Choke On Food? (Watch Video)