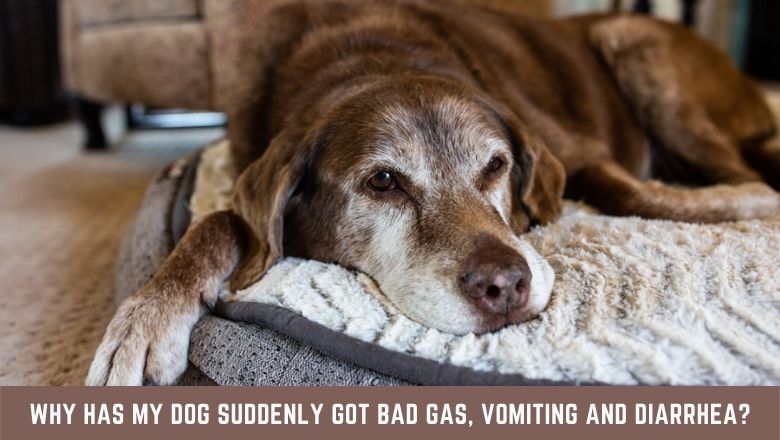 In this article, you will know the answer to the query “Why Has My Dog Suddenly Got Bad Gas, Vomiting and Diarrhea?“.

As a result, Rover’s stomach is upset. His stomach decided to cook up a mixture of noxious gases that would rival the most potent of fart bombs. The poor thing has the runs too, and it looks like he’s about to throw up.

I don’t like the sound of that. How should you proceed? Do you go to the vet or treat him at home? How could this have happened? Is it another dive into the dumpster buffet or something more serious? We’ll figure this out together.

Why Would My Dog Suddenly Get Diarrhea?

Sometimes our furry kids have weird likes and dislikes. Eating things they shouldn’t is one of those strange habits. Seriously? When there is perfectly healthy and probably obscenely expensive dog food in the kitchen, why do they see the trash can as a gourmet buffet?

Dogs with sudden upset tummies are likely to have won the neighborhood lottery in trash can diving. The vet calls this dietary indiscretion since these pets love eating things they shouldn’t. Humans and dogs should not consume the stuff in there. Consuming it could cause serious digestive problems. Dogs with upset stomachs are most likely to experience this. Your pup’s reaction could blow over quickly or result in an emergency trip to the vet with long-term consequences.

It is possible that your pup will suffer from both flatulence and diarrhea here. You poor thing.

A sudden change in diet is another leading cause of upset doggy tummies. It may hurt your pup’s tummy if you switch to a new food too quickly. Either it would make him gassy or it would give him the runs. You’re okay; we’ve all experienced this at one point or another, and it will probably settle down soon. To give his stomach some time to adjust to new foods, it is better to change them gradually.

Additionally, there is stress, such as if you are traveling with your pup, moving house, or going through any other sudden changes that may affect them. As much as we experience stress, our furry kids don’t always understand what’s going on.

The bad news is that upset stomachs can be a sign of something more serious, such as allergies, infections, intestinal diseases, and more serious conditions. When your pup’s stomach doesn’t improve or you’re not sure what’s happening, you should visit the vet.

How To Treat Diarrhea in Dogs?

Rover found a small hole in the fence that he could squeeze himself through, so he went for a solo walk. On the way, he tasted the trash cans in the neighborhood. Now he’s in bad shape. You’re worried because the poor thing keeps vomiting, farting, and having runny tummies.

Giving your pup’s body time to rid itself of gunk is the first step. In this case, you would not feed him for 12 hours. In addition to treats, bones, and everything else he wants, that’s all he can eat. Although it’s hard, his body needs the break to get rid of all the toxins. During this time, you might want to put down some newspapers or potty pads to prevent your pup from messing on the floor so much. This can be quite the task of cleaning up after your sick pet.

Once the twelve hours are up, provide your pup with some bland, easily digestible food. Avoid shocking his system now. Instead, gently massage his stomach to help things along. Choose plain cooked chicken and rice, and serve it in small portions. Don’t let him down a gigantic helping all at once. Eat more frequently, like three to four times a day.

With this approach, your furry friend’s body is able to return to normal and the body’s natural healing mechanisms can do their job.

You can wean your pup back onto his regular food once his stomach is back to normal. Take it slowly so that his stomach doesn’t get a shock and he goes back to step one. After he’s fully back on a regular diet, you can reintroduce treats too, but slowly. Let his body get used to normal eating again.

Antidiarrheal agents and probiotics might be prescribed by the veterinarian in some cases. Inflammation in your pup’s intestines could be partially to blame for his upset stomach if you do this. Ask your veterinarian before you feed any of these things to your dog. You should let your vet determine what needs to be done based on the dog’s breed, how ill the pup is, and many other factors.

When your dog is vomiting and having diarrhea, his body isn’t absorbing the nutrients he needs like it normally would. Make sure you give him plenty of fluids while you are treating his stomach. Water is essential, and it’s a good idea to add electrolyte solution if necessary. Keeping your pet hydrated during this ordeal will increase his chances of a speedy recovery.

When Should I Be Concerned About My Dog’s Diarrhea?

Most of the time, treating your pup’s upset stomach at home will suffice, and he’ll be back to normal within 24 hours. Getting your pup to the vet is the best option if you’ve followed the advice laid out in the previous section and he’s not improving.

There is a possibility that your pup has something more serious going on than an upset stomach. You should be able to see some improvement in your pup within 24 hours, and he should be markedly better within two to four days. Contact your veterinarian if this doesn’t happen.

There may be something blocking your pet’s intestines if he strains to pass bowel movements or if he only passes a tiny bit of watery stool. His bowels may have been blocked by swallowing something like a toy. Such a poor puppy. Having said that, it would be best for him to see a veterinarian as soon as possible.

Your pup would probably show more symptoms than just an upset stomach if he ate something poisonous or toxic. Take him to the vet if you notice anything more sinister. Convulsions, blood in the stool, vomiting or urine, or anything else that raises the alarm are all warning signs.

He will get a thorough examination at the vet and he will figure out what the next step is. Who knows what your pup may find when he goes dumpster diving. Early detection is usually the key to a successful recovery, so if you have any doubts about what to do, speak with your veterinarian. It’s better to be safe than sorry, after all.

Will My Dog Recover From Diarrhea?

The way your dog recovers from diarrhea depends on the severity of the problem. Unless it was a severe case, Fido would probably recover fully and quickly. A severe case, or if your pupate something that caused secondary complications, will probably take longer to recover from. You may need to administer prolonged dietary management or chronic medication to your pet.

Why Does My Dog Suddenly Vomit?

It’s gross when dogs vomit, but they do it a lot. There are times when it’s nothing to worry about and other times when it indicates something serious.

In order to understand what’s happening with your pup, we need to distinguish between vomiting and regurgitation. Upchuck can take a variety of forms. Not pleasant.

Regurgitation occurs when your pup brings up undigested food, saliva, and water. He usually gets it from his esophagus (the part of his throat that leads to his stomach) and he does not have to do anything about it. We mean that there’s no muscle contraction, and there’s usually no warning that it’s going to happen.

Then there’s the vomiting. Your pup is compelled to contract his muscles, and he is likely to retch as well. There are usually signs and symptoms, such as drooling, whining, pacing, and gurgling from Rover’s stomach. In short, the effort is considerable, and he’ll probably be feeling pretty lousy at that point. I feel sorry for him.

It’s often the same cause as diarrhea: Rover ate something he shouldn’t have, or he’s stressed. If you plan to take him for a car ride, keep a close eye out for signs of motion sickness. There could be something more sinister going on, such as parasites or a severe illness, as with diarrhea.

Usually, regurgitation is less severe and less severe than heartburn. There is a chance that your pet is eating too fast or is overeating. The pup may also be anxious or over-excited – we humans have that in common with our furry kids, don’t we? Regurgitation is also more common in some dog breeds than others. Among them are German Shepherds, Sharpies, and Great Danes.

When Should I Worry About My Dog Vomiting?

It is not unusual for dogs to vomit, and it is usually nothing to worry about. As long as he is only vomiting, and it is over quickly, I wouldn’t worry too much about it.

Consult your veterinarian if you notice any other symptoms. Symptoms include diarrhea or lethargy, signs of blood, or any other unusual behavior. A vet should also be contacted if the vomiting does not stop.

Why Has My Dog Suddenly Got Bad Gas, Vomiting, and Diarrhea? (Watch Video)