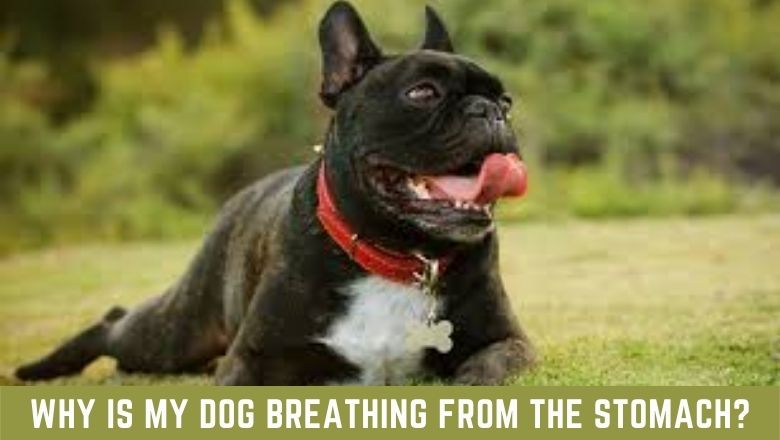 In this article, you will know the answer to the query “Why Is My Dog Breathing From The Stomach?“.

Every loving pet parent can tell if something is wrong with their dog immediately.

You will ask yourself what is wrong with your dog when you hear him make strange sounds while breathing, or if it seems like he is breathing from his stomach.

A dog breathing from the stomach may only be a temporary occurrence, but you cannot ignore it. A vet should be consulted right away if this is a symptom of a serious issue.

Remember that your dog might have a life-threatening condition and that this constitutes a medical emergency.

What does breathing from the stomach mean?

Having difficulty breathing is called dyspnea in dogs, and it is also called dyspnea in humans. A dog’s abdomen moves together with its respiration when he is breathing from the stomach. Dyspnea is a classic sign, but there are other symptoms you should watch out for, such as:

When is breathing from the stomach a medical emergency?

To determine whether you should take your dog to an emergency clinic or schedule an appointment with your vet, you should examine him carefully.

It is very dangerous to have blue gums. Cyanosis is the medical term for blue gums. Blue indicates that the dog is not getting enough oxygen and this is life-threatening. Cyanosis may occur if your dog has an obstruction in his airways, but it can also be a sign of a pulmonary problem, such as pleural space disease.

The behavior of your dog is another sign that something is seriously wrong. You should not wait if you notice the dog is unable to breathe through its stomach and is showing signs of distress. Regardless of the cause, your dog might die within minutes, so call the nearest emergency clinic immediately.

Alternatively, if the dog is working hard to breathe but doesn’t show signs of distress and appears interested in the environment, you’re probably not dealing with an emergency. Although he might have a respiratory problem, he’s managing it, so you can wait until the doctor can see you.

What are the causes of abdominal breathing in dogs?

This could be a sign of an obstruction or an illness if your dog appears to be breathing from his stomach.

A foreign object lodged in his throat

Dogs have a tendency to stick their noses everywhere, and they may inhale small objects like needles, fishing hooks, beads, etc. It is possible that the dog swelled up something in his trachea or bronchi. Ideally, you should open your dog’s mouth to check for splinters lodged in his throat if he had been playing with a large bone just before you noticed he was having breathing difficulties.

An obstruction is evident by long inspirations and exhalations.

The good news is that his airways are not completely blocked and he is still able to get some oxygen, even so, you need to treat this as an emergency. The obstruction can be removed, but if it’s too deep, you should stay away as you risk pushing it further and cutting off the man’s air supply in the process.

If your dog was out in scorching heat, he may have suffered from heatstroke. Since dogs do not have sweat glands, they regulate their body temperature by breathing. This is a sign that your dog is trying to cool down. If you’re still out in the sun, take your dog into a cool, dark room as soon as possible. Make sure that he drinks some cool water. On his back and on his paws, place a towel soaked in water. If his breathing doesn’t improve after a short delay, you should see a veterinarian. You might need to give your dog intravenous fluids, and the doctor might prescribe an antibiotic to ensure he doesn’t develop an infection.

Certain breeds, such as Bulldogs of all types, Pugs, and Boston Terriers, are more prone to heatstroke because they already have respiratory problems due to their flat faces.

In particular, you should check your dog’s chest for signs of trauma. There may be blood or lacerations on your dog if it has been traumatized. Maybe someone hit him in the chest or he was hit by a car. There are several types of chest trauma, including broken ribs, tears in the diaphragm, and bruised lungs.

Traumatic injuries can cause a collapsed lung, which is called a pneumothorax. During this process, the chest cavity fills with air. Even though this condition can resolve on its own, you shouldn’t put your dog’s life at risk. At the veterinarian, they will remove the excess air by inserting a needle attached to a syringe into the chest cavity. A severe case might require your dog to stay in the hospital for several days to receive oxygen.

Puppies and senior dogs with weakened immune systems are more likely to suffer from these infections. Viruses or bacteria can cause respiratory infections, and they are contagious. Your puppy may have an infection if he spends time socializing with other dogs at the park or at doggy care. After exposure to the pathogen, symptoms may appear a few days later.

It may not be an emergency but see a veterinarian as soon as possible. You should keep in mind that puppies may die of respiratory failure even if they show no signs of dyspnea.

There’s a possibility that your dog’s breathing problems have nothing to do with the respiratory system and that the problem stems from the abdomen. If he is bleeding, he may breathe through his stomach, or it may appear so if there is the gas accumulation and the abdomen is distended. It’s important to remember that bloating can be life-threatening for dogs,

In the event of severe bloating, your dog may need to be hospitalized and surgery may be necessary to reposition the stomach.

As with humans, dogs can develop various heart problems, especially in their golden years. An example is a dog that develops mitral valve insufficiency, which results in heart failure. It is not his lungs that are causing the problem, but rather his heart, which cannot pump enough blood to provide oxygen to the tissues. Your dog will be struggling to breathe and you will notice an increased respiratory rate (rapid beats) as the body attempts to increase the oxygen volume. Healthy dogs should breathe 20-34 breaths per minute, and they shouldn’t have to exert any effort.

The symptom of dyspnea is only one of the signs and symptoms of congestive heart failure. Among other symptoms are:

In addition to the accumulation of fluid in the chest cavity or abdomen, a doctor can diagnose this condition as well.

Dogs with heart failure are likely to be prescribed diuretics to eliminate the fluids and vasodilators to relax the arteries so the heart doesn’t have to pump so hard to keep blood circulating. You should also watch the salt in his meals.

Why is my dog breathing heavily while lying down?

When your dog is outside playing and running around, rapid breathing is to be expected. If your dog is at rest or asleep, any breathing issue should be treated as a sign of respiratory distress. Labored breathing can be a symptom of disease if such causes as heat stroke, trauma, or obstruction of the airways are excluded.

Older dogs are prone to heart failure, but there are other diseases that can also cause dyspnea, including:

Your dog may seem to be breathing from the stomach if an enlarged organ is pressing on the diaphragm.

Heartworms and obesity can also cause respiratory problems.

Why is my dog’s breathing weird?

It may indicate a lung problem if your dog is breathing rapidly but not panting. Fast shallow breathing can be triggered by edema, fibrosis, inflammation, or cancer. You should take him to the vet anyway to run a full set of tests to determine what the problem is.

Should I be able to hear my dog breathing?

In most cases, no. A brachycephalic dog, such as a Bulldog or Pug, has difficulty breathing, so it is not uncommon to hear them breathe. There is a lot of tissue cramped in the small space of their flat heads because their airways are shorter than normal.

You should examine your dog carefully if he appears to be breathing from the stomach. Try to cool him down if he’s just hot, but if he has a full-blown heatstroke, you should get him to the doctor immediately. As well as respiratory obstructions or breathing difficulties caused by trauma to the chest cavity. Breathing from the stomach may be a sign of heart failure, liver disease, or cancer in elderly dogs.

Why Is My Dog Breathing From The Stomach? (Watch Video)