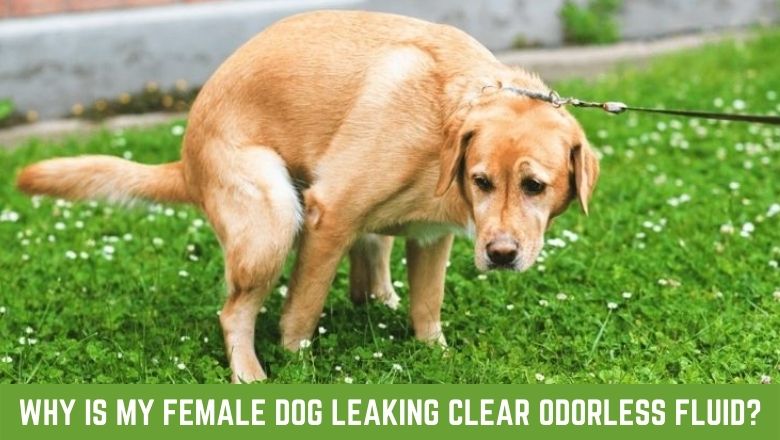 In this article, you will know the answer to the query “Why Is My Female Dog Leaking Clear Odorless Fluid?“.

The problem usually appears out of nowhere.

You find a puddle of clear fluid where your dog slept after she takes a nap.

What does that mean? Could it be dangerous?

These leaks are more common than you would expect in female dogs, and they do not necessarily indicate something more serious than a UTI, which is, of course, annoying but highly treatable.

Prior to considering possible causes, you must identify the source of the leak.

It might come from the anus, the urethra, or the vagina.

By blotting a paper tissue against her privates you can determine where the leak is coming from.

Because the urethra and the vagina are so close to each other, it’s hard to tell where the leak is coming from.

An infection of the urinary tract can cause a leak, and it can be quite large.

Scolding your dog for taking a nap in your bed and leaving a mess behind won’t make a difference.

A dog with a UTI will not be aware that she’s leaking. For the most part, dogs behave normally the rest of the time.

The main problem is that it can be hard to tell whether a puddle is urine or not.

Using white tissue paper and soaking it in the puddle is one method for finding out.

No matter how disgusting the mess is, you have to clean it up anyway.

The yellow stain on the tissue is clearly urine, so your dog might have an infection.

Monitor your dog for additional symptoms associated with UTIs, such as:

There are some dogs that refuse to drink water in order to avoid having to go as it hurts too much, while there are others that drink quite a lot, hence the possibility of a leak.

You must take your dog to the vet if you think she may have a UTI, as a urinalysis will reveal what type of bacteria is causing it.

Most UTIs in dogs are caused by Escherichia coli, a bacteria typically found in feces.  In addition to testing for bacteria, doctors determine which antibiotic is the most effective when treating that type of infection.

The importance of diagnosing a UTI lies in the fact that the doctor can rule out other more serious problems such as cancer, kidney disease, or kidney stones.

These disorders can all present with similar symptoms as those caused by an infection.

What is spay incontinence?

Every fifth spayed female dog suffers from this condition.

The problems usually begin 2.9 years after the spaying, and older females are more likely to experience them.

Upon spaying, the amount of estrogen circulating in the body decreases, causing the muscles surrounding the opening of the urethra to lose tone.

The decrease in estrogen appears to reduce bladder capacity at the same time.

The dog can’t keep the water in, so leaks occur.

During sleep, when the dog has less control over the sphincter muscle, such accidents are more common.

In dogs weighing more than 45 pounds, the condition is more prevalent in medium and large dogs. Obese dogs may also have an increased risk of developing this condition.

Canine incontinence is more common in the following breeds:

If your spayed female dog leaking clear odorless fluid, doctor can prescribe medication to reduce symptoms and unfortunate leaks associated with canine incontinence, but it cannot cure the condition.

For most pet parents, hearing about vaginal discharge will make them think it’s due to the time of the month, or the time of year for dogs.

In addition to this, there are other problems that could cause a discharge, not necessarily clear or odorless.

Depending on their size and breed, dogs go into heat between 1-3 times per year. First signs of vaginal discharge are often noticed by pet owners.

It’s hard to mistake normal vaginal discharge for accidental leakage during estrus since it is always bloody.

Dogs can develop vaginitis when they experience an inflammatory condition in their vagina. Many factors can contribute to this condition. Almost always, this condition is accompanied by a mucoid vaginal discharge.

Discharges of this type range in color from clear to slightly greenish yellow-tinged.

You can find both intact and spayed dogs suffering from vaginitis, which can cause a leak in your dog.

You will see that the dog’s vaginal area is swollen and red if she has vaginitis.

You may notice pus or even blood in the discharge if there is an infection present.

Vaginitis may be caused by a variety of factors, including:

For a detailed examination of the dog’s reproductive system, you’ll have to take her to the veterinarian. The treatment will depend on the cause of the problem.

The good news is that most dogs are able to recover without any problems.

A veterinarian might tell you to spay your intact dog in order to avoid future problems.

There is an interesting finding that male dogs seem to be attracted to females suffering from vaginitis, even if she is not in heat.

When your dog has an infection and is in pain, paying attention to him might not be the best idea.

The infection is usually found in intact females and is caused by bacteria.

One to twelve weeks after going into heat, your dog is more likely to develop pyometra.

Estrus is characterized by high levels of estrogen and progesterone.

Women who are not mated and don’t get pregnant are more susceptible to bacterial infections due to a cystic uterine lining.

The discharge from pyometra is almost never clear and odorless, but it can sometimes be present.

If there is no discharge, closed pyometra is even more dangerous, as it can lead to a very distended uterus, to the point of rupture.

In addition to the obvious discomfort, you will notice an enlarged abdomen.

If you don’t seek medical attention right away, the infection may cause septicemia, which can be deadly if left untreated.

An average female dog’s pregnancy lasts nine weeks, but she can give birth to a healthy puppy even five days before the due date.

It is a definite sign that your pregnant dog is having puppies if she produces vaginal discharge. When her waters break, she usually discharges clear liquid, but occasionally there is mucus flecked in it.

It is rare for vaginal discharges to occur in a false pregnancy, a condition that affects intact females who were not mated.

However, you will notice her breasts becoming enlarged and even leaking a brown or watery fluid.

A dog uses this gland to mark his territory with an oily and smelly substance.

It is unlikely, however, that the dog will leave a real puddle behind her, as the sacs do not have the capacity to hold that much fluid.

There won’t be any odor either.

Your dog doesn’t need to be alarmed if there is a puddle under her bed where she sleeps.

There are many problems that can be caused by a clear, odorless fluid leak, but very few are actually harmful.

There is a possibility that an infection of the urinary tract caused the leak.

Observe your dog for other UTI symptoms and consult a veterinarian.

It is possible that the leak is a sign of canine incontinence, which is quite common in dogs who have been spayed.

Additionally, you should have your dog checked for vaginitis, an inflammation of the vaginal area that can have multiple causes.

It is also highly treatable to have a genital infection.