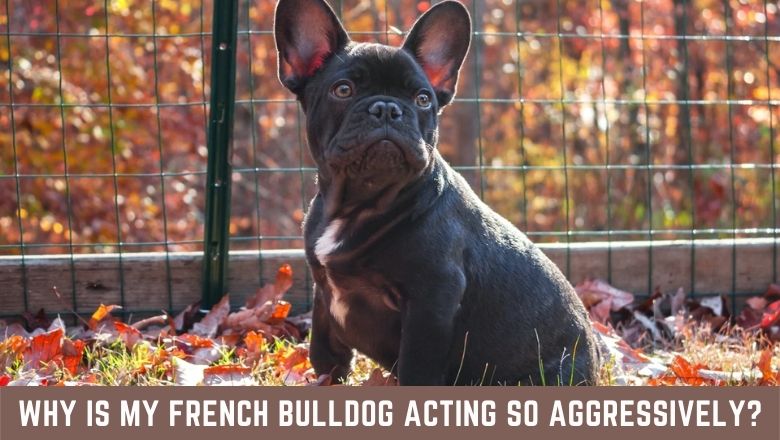 In this article, you will know the answer to the query “Why Is My French Bulldog Acting So Aggressively?“.

A Frenchie is a cute little companion dog, they are an energetic breed and will keep you entertained for hours. French bulldogs love to be pampered and they don’t mind demanding attention, and they sure do get it!

It is impossible not to enjoy the company of these affectionate little dogs with their highly entertaining personalities. Though Frenchies are full of energy and never seem to tire, not all of them behave the same way.

A dog’s temperament and personality are influenced by a number of factors, ranging from their genetic makeup to the environment they grow up in and how much training they receive. The personality of a French bulldog can range from very energetic to calm and reserved depending on all of these factors, though they are more likely to be energetic.

Dogs’ temperament and personalities, as well as their inherited characteristics, can be shaped during the first few weeks of their lives, same for Frenchies. A male Frenchie tends to be more playful, energetic, and rambunctious than a female Frenchie, which is more gentle and affectionate.

Puppies of French bulldogs are highly energetic and mischievous, and won’t think twice before getting into trouble. During adulthood, these cute companion dogs lose some of their energy and become less hyperactive.

When well trained, Frenchies show a high level of intelligence and an incredible ability to communicate and interact with other breeds. French bulldogs are considered to be the most well-behaved small dog breed.

Besides being active and assertive, French bulldogs are really very sweet and affectionate companion dogs, they enjoy being held and will gladly sit on their owners’ laps. If properly trained, a Frenchie will be entertaining, very obedient and a good pet.

Can French bulldogs be aggressive and why?

The French bulldog is a great choice for those looking for a cute little lap dog that’ll sit with them while they watch TV and accompany them on walks in the park. The hyperactive fellows will not tire of spending time with their owners. Frenchies are definitely one of the best companion dogs in the world because of their playful and entertaining personalities.

There’s a reason and an explanation for the normal behavior of French bulldogs, even if they aren’t prone to explosions or aggression.

It is possible for Frenchies to act aggressively if they feel threatened, attacked, or provoked. When they are jealous or insecure about their owner or other animals, they can also become aggressive.

You will see them growl or bark at this point, but it never progresses beyond this. Generally, they don’t attack anyone or other pets physically, especially if they’ve known them since puppyhood. There is no doubt that French bulldogs love kids, probably because they are very energetic and love to play, and kids tend to match their energy.

What is fear aggression and how can you stop it?

Running away from something scary is the default response of a dog. If it cannot find a way out and feels trapped, it will either submit or become aggressive.  Fear aggression is that which is a result of being trapped.

Fear-aggressive dogs will show obvious signs; their ears will be pinned to their heads and their nose wrinkled as they back or growl. When it pants fast, it raises its hackles, bares its teeth, tucks its tail, and lowers its body.

A dog can become fearful of aggressive things for many reasons, trauma is one of them. An animal that has been abused, neglected, or endured something unpleasant can become fear aggressive. However, this isn’t always the case. Dogs that are well cared for and well handled but weren’t properly socialized as puppies can also develop fear aggression!

The dog lacks socialization since he is unfamiliar with things like meeting new people, seeing new sights, hearing new sounds, or even meeting other animals. They spent a lot of time indoors as puppies and basically grew up in isolation, so when confronted by strangers or things that are unfamiliar to them, they get scared and may become fear aggressive.

Dogs with fear aggression can be helped to be less fearful through a variety of methods. A good example is a CAT (Constructional Aggression Treatment) method. Dogs find it scary to be exposed to things or people that they find terrifying. Rather than shielding the dog, you let him confront his fears until he learns to be calm and realizes that what (or who) he is afraid of isn’t a real threat to him.

Dogs that are fear aggressive cannot be retrained overnight. It takes time, effort, and consistency. When done correctly, your dog will be less fearful.

There are some things you should always remember when dealing with a fearful aggressive dog;

How can you stop your Frenchie growling or snapping?

French bulldogs growl to warn people to stay away from them, but if left untreated this will only worsen. It is true that French bulldogs are very small dogs and may not be able to do much harm to an adult, but it can injure children who get in his way and fail to back out when he growls.

Growling isn’t something that usually happens to Frenchies, so if yours suddenly start growling, you must figure out what’s going on. Having this information will help you to understand your Frenchie better.

He may be warning everyone not to approach his food if he growls while eating. It would be better for your Frenchie if he could eat peacefully and alone at a private place. Alternatively, you can feed him yourself, that is, hand-feed him from his food bowl, which will help you relax and not worry about losing his food.

In addition, Frenchies growl when they are scared of someone or a situation, especially if it is unusual. This usually occurs when the dogs weren’t properly socialized as puppies. Your dog will stop acting this way if you introduce them to new things and people in a gradual and proper manner.

Then it may be an indication of something more serious such as a medical condition if suddenly your Frenchie started growling or snapping without provocation or justification. They are also susceptible to a number of health issues that can cause severe pain and cause them to growl and snap. For a thorough checkup to determine if your dog has a medical condition, you may have to take him to the veterinarian.

Although you may be desperate to stop him from growling or snapping before it escalates to something unpleasant, you don’t want to punish or yell at him since this will only make him more scared. Additionally, negative training methods will only make it worse, and even if he doesn’t growl anymore, he will still be scared, and a scared dog is potentially dangerous. Consider consulting an animal behaviorist to prevent this.

Can French bulldogs be possessive and how can you stop it?

A Frenchie can be very possessive of anything that they perceive as theirs, such as food, toys, and even their owners. In French bulldogs, this type of behavior is quite understandable because they are companion dogs, so they thrive on human companionship and affection.

They would always prefer to be in the company of someone, especially their owners, and would resent being alone. When this is the case, your Frenchie follows you everywhere, but you want to stop this clingy, possessive behavior.

It is actually possible to train your Frenchie so that he will be more independent. To accomplish this, a simple way is to separate him from you for a longer period of time than you have in the past. To help you do this, you can install baby gates or other barriers.

Additionally, you should train your Frenchie to understand the stay command. It is okay for your dog to stay alone from time to time with this command. The distance should be gradually increased. Start with a few steps away before going as far as a room away. Reward him for each successful exercise with his favorite treat.

The dog can also be taught to understand that his place is a mat. You can teach him to understand the command to go to his place, so instead of following you, you will tell him to go there and reward him for doing so. Make sure he can entertain himself with his favorite toys while he sits on the mat.

Why does my Frenchie suffer from separation anxiety and how can you stop it?

The presence of family is comforting to dogs because they are social animals. Your French bulldog knows no other family so when you leave him alone he’ll definitely feel lonely, depressed, or very anxious. Separation anxiety is commonly known as this.

The French Bulldog hates to be left alone for a long period of time and is prone to separation anxiety. A Frenchie may engage in some destructive behaviors during such an episode, such as chewing your furniture, scratching the doors, barking, whining, howling, hiding, or urinating and pooping on the floor.

You may also notice that he becomes frantic and nervous whenever you are getting ready to leave. The thought of leaving your dog home alone can be very stressful for him and even for you, because you’ll be worried about how he’s feeling and what he’s doing. There are a few things you can do to make your Frenchie happier and help him cope well alone.

Treat dispensers and toys for your Frenchie are a must. Keeping dogs busy with toys and treat dispensers will keep them active and keep his mind off you till you return.

There is no need to turn off the TV when your dog is watching it. Since the television is on, the house won’t be incredibly quiet, so he won’t feel alone. Furthermore, the moving images on the television will keep him occupied.

To play with, you can also give him one of the clothes you wore before leaving. Your dog will smell you in the clothing, which will help him stay calm and not miss you so much.

If you have neighbors with pets, you can leave your Frenchie with them while going out, so that your pet and the neighbor’s pet can play together until you return.

To avoid any kind of brutality, be sure that these pets get along before doing this. In the event that this is not possible, you can consider taking him to a Dog Daycare Facility and picking him up when you return.

Why Is My French Bulldog Acting So Aggressively? (Watch Video)