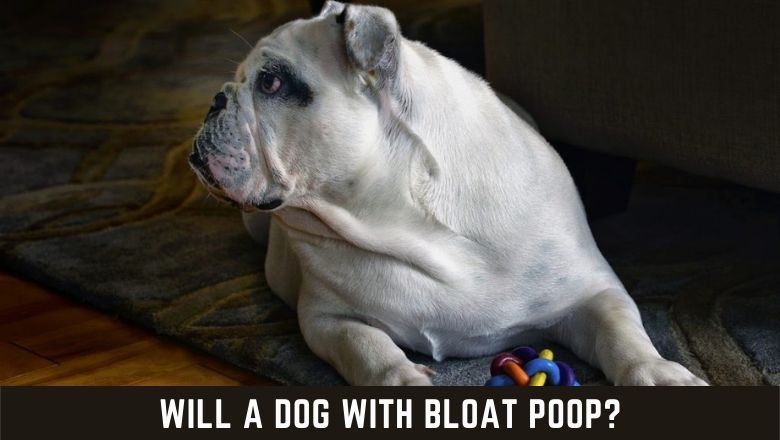 In this article, you will know the answer to the query “Will a dog with bloat poop?“.

Have you noticed that your dog’s stomach is swollen and tight? Has your pet been restlessly pacing up and down, and is it retching without result? Is your puppy retching or farting without success? Are you worried that it may be bloated?

Have you ever wondered what causes dog bloat? If you have questions about dog bloat, read on to get your questions answered.

Dog bloat literally refers to a dog’s inability to pass gas, fluid, or solid waste from the mouth or anus. It is a serious and life-threatening condition for dogs that requires urgent medical attention and can result in death within minutes or hours.

1. Will a dog with bloat poop?

If a dog has bloat, it will not be able to belch, fart, or poop. Essentially, dog bloat results from the dog’s inability to pass gas, which causes the stomach to rapidly fill with air that cannot escape. In dogs, this condition is known as Gastric Dilatation Volvulus (GDV) or Stomach Torsion.

Bloating simply means that gas – among other things – is trapped in the stomach and cannot pass through the digestive system, either as a belch or a fart. Because there is no escape route, the gas in the stomach ferments and builds up pressure. Untreated, this is an emergency medical condition, and the stomach will twist at each end, blocking both its entrance and exit and further cutting off blood supply to the digestive system.

When the blood circulation is disrupted, the dog will go into shock and possibly collapse from dog bloat or GDV. Unlike pets that have eaten too much, dogs with bloat will have a swollen stomach. In addition, the dog will be restless and try fruitlessly to get some of the gas out.

In a perfectly healthy and happy dog, bloat can develop within a few minutes. There are no warning signs to alert you that your dog is about to suffer a bloat episode. A dog is bloated and acts strange when it looks pained, uncomfortable, and is already bloated.

You will be able to tell whether your dog has bloat if she/he exhibits the following symptoms:

When your pet shows the symptoms above and you suspect that it may be dog bloat, then you should take your pet to the nearest veterinary hospital as soon as possible since every minute counts when it comes to your dog’s survival from bloat. It is possible that if a vet is not contacted immediately, the condition will worsen with the dog going into shock, with labored breathing, pale gums, weak pulse, possible collapse, and death.

Older and middle-aged dogs are more likely to suffer from dog bloat. However, studies have been unable to determine why bloat occurs in the first place, why the gases in the stomach cannot either move back into the esophagus and out as a belch or move into the intestines and out as a fart.

Bloat is generally thought to occur when a dog swallows too much air, either while eating too quickly or while playing. Gas and fluid remain trapped in the stomach, which is mind-boggling.

A dog’s bloat is not a normal condition and will not resolve on its own if nothing is done. When a dog has bloat, it requires immediate medical attention and if not attended to by a vet, the condition will only worsen within a few minutes or hours, and the dog will almost certainly die.

It can be very dangerous to try to help your dog by giving him or her over-the-counter medications or other home remedies that you feel will alleviate the condition. It will only delay the urgent and immediate treatment your dog needs, making things worse and wasting valuable time.

When the stomach has not rotated and twisted to the point where the dog cannot be saved, a bloated dog has a better chance of surviving.

A bloated dog can be treated by decompressing the stomach before it rotates to eliminate the excess gas. A twisted stomach or collapsed dog greatly reduces the chances of survival, and all these things can happen within an hour.

4. What can you do for a bloated dog?

Other than taking your bloated dog to the nearest veterinary hospital for urgent medical treatment, there is nothing else you can do for him. You shouldn’t try a DIY home remedy for treating or relieving a dog with bloat because you won’t help your dog if you do.

Bloated dogs are in a lot of pain and discomfort, so attempting to force anything into their mouths may increase the suffering, leading to additional complications or getting bitten yourself. Furthermore, trying home remedies will further delay the urgent health care your dog needs.

Dog bloat seems like a simple condition that can be treated at home, but unfortunately, there is nothing simple about it. The situation is complex and can easily spiral out of control if it is not handled as urgently as it should be.

5. What foods cause bloat in dogs?

Dog bloat is mainly caused by a dog swallowing too much air, either while eating or immediately after eating.

A study conducted at the University of Purdue found that large and giant dog breeds that gulp down one large meal a day rapidly are more prone to GDV than other dogs. As a result, reducing your dog’s food and giving him/her smaller portions two or three times a day will be better for him/her than one meal a day.

Dogs are also at risk of bloat due to the type of food and ingredients they consume. Over 300 dogs were examined in this study, including 106 with bloat, and the results showed that feeding dogs dry food with fat as one of the first four ingredients increased their susceptibility to bloat by 170%.

A dog’s GDV risk was substantially increased by up to 320% when dry food with citric acid as an ingredient was moistened before feeding. Generally, moistening dry food does not cause bloating, only when it contains citric acid.

6. What can you do to prevent bloat in your dog?

Despite the fact that bloat cannot be completely prevented, there are a few ways you can help your dogs avoid experiencing a dreadful bloat episode in the future. These tips will help you avoid dog bloat in the future;

7. What breeds of dogs are prone to bloat?

It has been shown that some dog breeds are more prone to bloat than others, and these are breeds with deep chests and narrow waistlines, like Great Danes and GSDs. Similarly, both pure-bred and mixed-breed deep-chested dogs are at a higher risk of bloating than barrel-chested dogs.

It has been reported that the Great Dane is the breed with the highest susceptibility to GDV, followed by breeds like the Bloodhound, Irish Wolfhound, Irish Setter, Akita, Standard Poodle, German Shepherd Dog, Boxer, Labrador Retrievers, Great Pyrenees, and Weimaraners.

These aren’t the only breeds that can get bloated. Any dog can get bloated, but these breeds are more susceptible to it because of their anatomy. In addition to providing the stomach with more space to distend with gas and fluid, deep chests allow the stomach to rotate independently.

It is not the case with barrel-chested dogs, which makes them less likely to suffer a deadly bloat episode or wind up with twisted intestines.

A dog’s age is also a risk factor for having a bloat episode. According to a Purdue report, every year that passes increases your dog’s risk of bloat by 20%, probably as a result of weakening ligaments that hold the stomach in place.

If a dog has bloat, he will neither poop, fart nor belch. GDV, or dog bloat, is a very dangerous medical emergency that can kill a healthy dog within an hour. That is a serious condition, and there is nothing you can do at home to relieve the symptoms.

When you notice the early signs of bloat, there is almost nothing else you can do for your dog other than to get him to an open veterinary hospital as soon as possible.

Will a dog with bloat poop? (Watch Video)